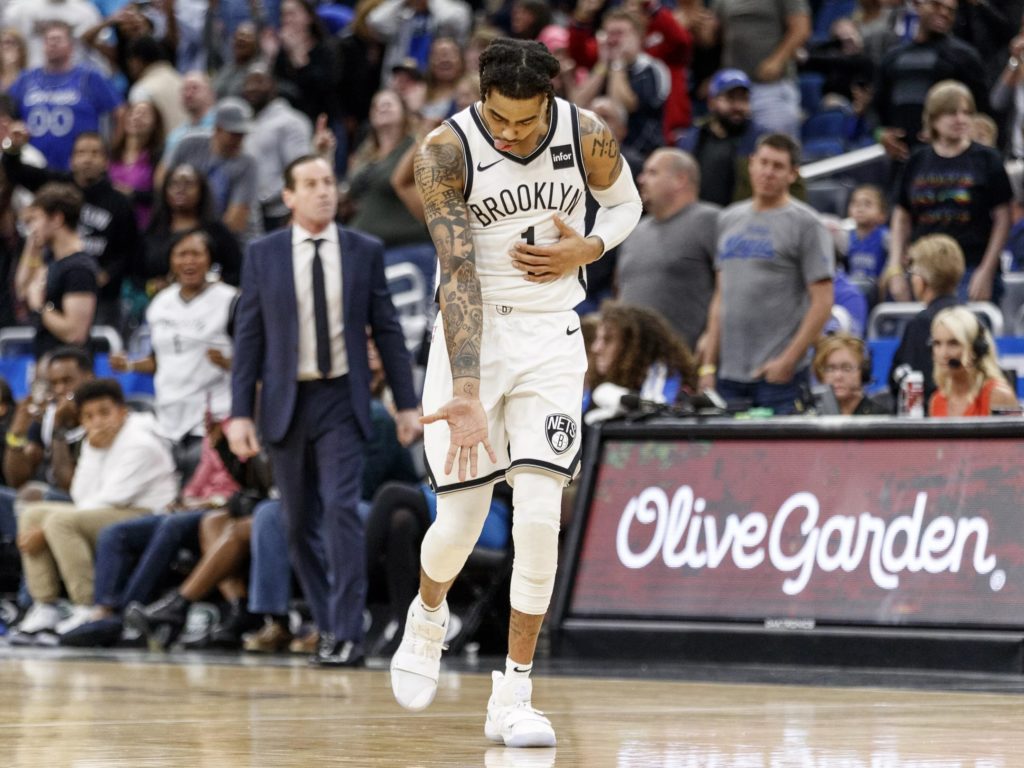 They Got It Wrong About D’Angelo Russell

Passive aggressiveness is bull#### and for cowards.

Just call that person an a##hole!

So when I say “they” you know who I’m talking about.

It’s the “they” I bleed purple and gold for.

They got it wrong about D’Angelo Russell.

And for that matter they got it wrong about Julius Randle too. Who had 24 points last night as the Pels beat the Lakers by an unlucky for some in purple and gold, 13 in New Orleans…WITHOUT Anthony Davis. Making that big win look all too easy in Crescent City. To go along with some choice words for the Lakers bench as J.R. shot a big three. Paraphrased on 24/7 Sports like this, “It’s not fully clear what Julius Randle had to say to the Laker bench, but it probably wasn’t positive” (perfect). But I digress. As if you’ve read one of my articles before, you’ll know my Julius heartbreak and how often I go on about this. And if you think that’s bad you should see my Twitter. Wait…no, scratch that. You shouldn’t see my Twitter.

But if you thought 24 was good yesterday, then another former Laker D’Angelo Russell on his 23rd birthday hit 40 like the kind of age he doesn’t have to worry about for another decade and a half. Becoming the youngest player in history to hit that much on his bday. As he had ice in the veins and the Hornets nest winning a game 117-115 in Charlotte. Less than a week after he became an All Star for the first time dishing to a downtown Dirk, hitting dimes in the buzzing hub of North Carolina for Team Giannis.

Everyone talked about how the Lakers shouldn’t have trade away their young core of Lonzo, Kuzma, Ingram, Hart and Zubac (now gone) for one man who wants to Paul George (hmm) go there by free agency already. But look at Russell, Randle, or Jordan Clarkson and Larry Nance Jr. They’ve been trading away their future for years. They talk about needing more three point shooting and a secondary scorer for LeBron. This guy would have got that bill as perfectly as a signature under a check. And they traded this guy for Brook Lopez?! Sure a great centre from downtown, but still for D-Lo?! I know they where making way for the pure point of Ball but in this small ball revolution of a league why not move Russ who likes to shoot to I don’t know…Shooting Guard maybe?

They (Magic) said he wasn’t a leader. But look at him lead the Nets now. The Lakers don’t have a clutch killer. This kid learnt under another guard who loves to shoot as his natural birthright instinct. His name was Kobe. Do the Lakers not remember the time D’Angelo hit a big shot to win a game a day after he lost his grandmother? Falling emotionally and exhausted with his spent arms by his side into the open embrace of his family in the crowds. As he ran straight up the stands to them without even doing his signature celebration as the buzzer rang out (not walked out the tunnel before it even blared ‘Bron). It’s one of the greatest moments in modern Laker history like when Phil Jackson begged a plugged in Ron Artest to not shoot. Did they forget what this hero has in his veins? Pure, cold blooded Basketball heroin.

And you don’t need to spend all night, no sleep, saying hello to Brooklyn on your League Pass to get your fix. This former face of the future and franchise star right here and now is a nightly highlight reel. The Nets finally have a superstar to shoot for moon for the first time since they were Jersey boys. And his ice cold, big shots that he can set up for himself, off his own dribble with the confident (not arrogant) pause and poise of a great, looks even better than his dread locked down, high-flying look. Or the range of iconic Nets jerseys served this year. Even the ‘Juicy’ City ones in Bed Stuy. This kid is notorious. This man is B.I.G. It’s all good baby baby.

NBA champion great John Salley told me in an interview a few years ago that the Barclays Center banked in the B.K. borough of New York looks like a “spaceship has landed in Brooklyn”.

With all due respect to George Gervin here’s the next generation Iceman. The most passionately driven small guard since Iverson keeps stepping over the Lakers.

Fellow Lakers fans don’t just what could have been worry about Paul George. It’s not just PG-3 that’s putting up MVP numbers this year every day of the week. Now watch what you say about create for themselves scorers like Brandon Ingram. Or just wait until China this August when the Nets take on the Lakers in a doubleheader over the cities of Shanghai and Shenzhen, were there will be ice in the Far East for what I’m sure will be a B.K. crowning proving the Kings land wrong contest.

They (the whole nation) questioned his maturity. When he was still a teenager. They made him the fall guy scapegoat for the Nick Young situation. But failed to listen to or understand the accidental mistake he made. They failed to see that cheaters always get found out and ruin their own marriages anyway. They shipped him and then the Swag months later P. But still when it was all shoved under the rug they pulled they forgot to realize the amends D’Angelo made and how he reached out instead of acting out. But even when they saw the funny side they forgot that Russell was more than sporting enough to troll himself, throwing then rookie Ben Simmons’ phone into a pool in a Foot Locker commercial.

Now did you see how mature, professional and polite he was on ESPN’s ‘Get Up’ with Jalen Rose and Mike Greenberg? And the kids only 22 years old! Or the same politeness in smiles and honour during the Nets Lunar New Year honorary celebrations were he greeted everyone in the Chinese he learnt at Monteverde? Or how he was with his Three-Point Contest winning teammate Joe Harris in courtside support. Or even last night when he was as per, cold water drenched by Caris LeVert during his postgame interview only to playfully react with the same warm smile. Holding on to LeVert’s arms in an embrace and giving it up for him, “my dawg. My dawg”.

So the next time someone talks that mess about you or someone else online with no reason. No matter how passive aggressively with that built in deniability. And then everyone joins in like they had coloured hair brushed all the way up, retweet and emoticon likes for the birds. Unless your Jussie Smollett, maybe don’t believe everything you read.

Just because you have a Twitter. Doesn’t mean you have a handle. This Point Guard does though. And have you ever heard him bite back? No! He just shoots back. Literally. Looking after number one with a bucket.

As Denzel Washington said in ‘American Gangster’, “the loudest one in the room is the quietest one in the room. Understand”?! Although this writer doesn’t want to get into trading pointed quotes because then we will be practicing what we’ve been preaching against. Although we will end on one more after this.

D is no longer loading. No more reason to ‘please wait’. The sliders are up like three burgers to go with your Brooklyn Lager. The bar is full. 100%. Loaded.

He deserved more. And now he’s getting it.

The Lakers loss is for sure the Nets gain. And on your birthday weekend here’s to you D’Angelo. It’s great to see you so happy. As they say living well is the best revenge.

You really need us to tell you who said that quote?