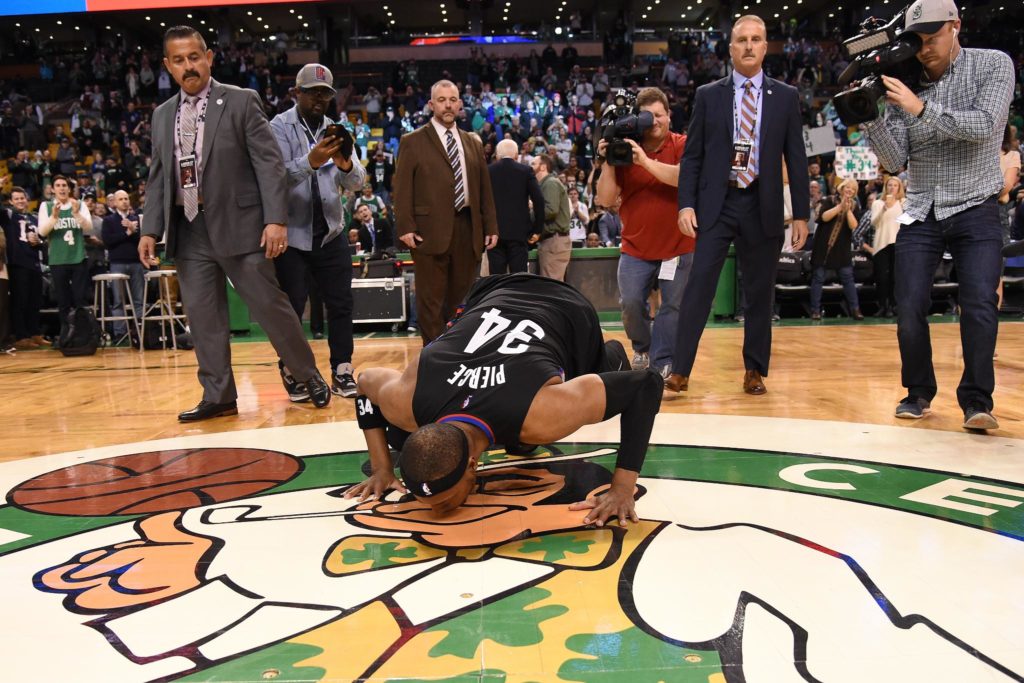 ‘The Truth’ Is Told For The Last Time In Boston

‘The Truth’ put his lips to the Leprechaun’s lucky Shamrock’s at center court of the TD Banknorth Garden one last time as he kissed goodbye the franchise of the Celtics and the city of Boston.

It was the perfect picture fit to why we play this game where amazing happens as the Los Angeles Clippers reserve played in the Garden for the last time on a road tour in this his retiring season.

It was an emotional weekend too in Beantown as they sent P-Double one game further into the rocking chair. The New England Patriots and maybe the only Boston legend that could rival the truth of Pierce right now Tom Brady turned the whole Superbowl on his head after halftime to touchdown a victory that sent everyone from Marthas Vineyard to Cape Cod Gaga like that Lady that flew from the top of the stadium to perform a show at the half. Now there was no reason for this city to feel deflated even if emotions were riding as high as the tensions.

Still despite this Patriotic win there was something touching about Paul’s final homecoming and Celtics career curain. After Houston honoured Yao, the Boston Celtics faithful thanked Paul and his classic chapter in the town and teams storied like no other franchise in this National Basketball Association.

Former Shamrock Shaq dubbed Pierce ‘The Truth’ in his rookie year when he was a purple and gold rival as a Los Angeles Laker. Paul’s piercing play proved this anything but fake. But we saw just how real and tough he was as he overcame a life threatening nightclub stabbing that could have left him another cruel Celtic untimely tragedy, like the deaths of the post-Larry legend superstars to be Len Bias and Reggie Lewis. And came back the very next campaign a seasoned pro who formed a dynamic duo with eighth wonder Antoine Walker, shimmying their way to success until number 34 wanted O’Neal figures.

Must Read:
The Death And Rebirth Of Superman, Dwight Howard

That’s when after a few years of retooling Paul Pierce redefineand reintroduced todays superteam idea of the Big Three (and later the new Fantastic Four with Point prototype Rajon Rondo) with Ray Allen (who just came from one in Milwaukee with Big Dog Glenn Rob and former C, Sam Cassell) and the Big Ticket Kevin Garnett. Then the banner years came where those jerseys of the three from 5 to 34 will one day, sooner than later hang now all of those legends are off clubbing (we’re talking golfing of course).

Paul Pierce should have finished his career in Boston. But instead after no sleep in Brooklyn with K.G. ‘The Truth’ cut down those nets with a spell in Washington as a Wizard. Before reuniting with former Celtic championship coach Doc Rivers in his real home of Los Angeles for his latest clippings. And from the Times to the Globe they all heralded Paul Pierce and his spotlight moment, who ended the game with a trademark clutch three and a 107-102 win.

You just had to love it as he checked out for the last time and hugged Doc as everyone arose like the National Anthem. There wasn’t a dry eye in the watered Garden.

And that’s the truth.