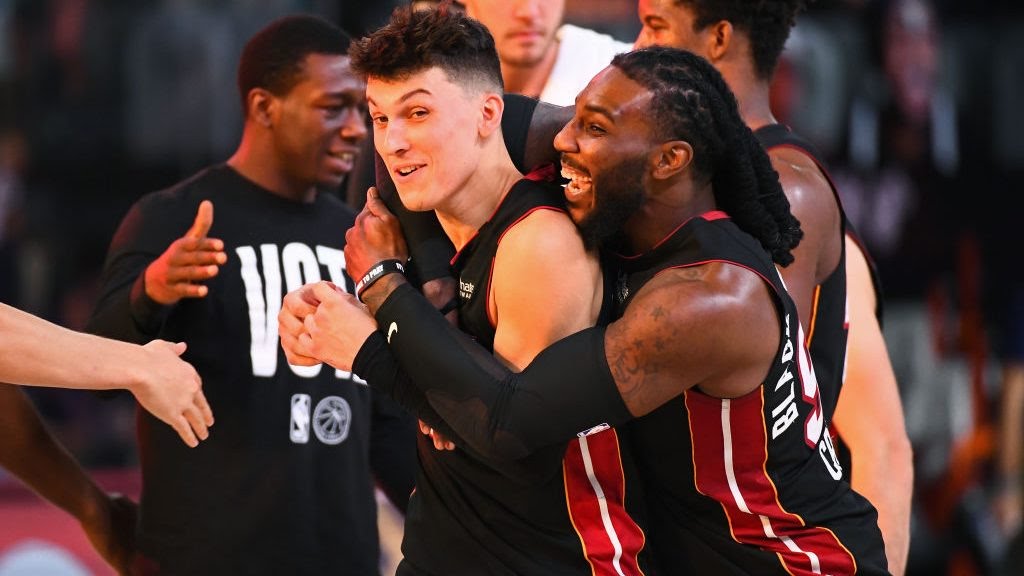 Tyler The Herro Brings The Heat For Miami

The latest Miami Heatle in Butler and Bam’s best big three in South Beach since ‘Bron, Bosh and the way of Wade, Tyler can create for himself like a famous rapper. So much so, they might want to change the Rookie of the Year rankings.

Zion came in second anyway and Ja doesn’t rule the postseason like this.

This being Tyler Herro’s 37-point outburst that won Game 4 of the Eastern Conference Finals 112-109 here in the home-court advantage state of Florida and put the storied Boston Celtics on the ropes.

Cue the no team has ever come back from a 3-1 deficit, King James in shades meme.

Still it’s going to take a lot from Tatum and Co to knock-out the scorching Heat who have been blowing bubbles ever since they put the Mickey Mouse ears on and entered Disney World like the rising Suns.

People are calling for a Nuggets/Heat finals after the Lakers dropped their latest against Denver, following Anthony Davis’ miracle Mamba Mentality and jersey shot for the ultimate, “Kobe”.

Now how hot would that be?

Those used to the history of the Lakers and the Celtics may just need to see its a Whole New Game here in a brave new world like Huxley.

The 21 year-old became the second youngest player in playoff history to put up such numbers on a team. The other? He at 20 years of age in Game 6 of the 1980 NBA Finals was a point-guard who stepped in and played center against Philadelphia when an injured Kareem Abdul-Jabbar couldn’t even take the ‘Airplane’ like one of his classic cameos in Hollywood. This young point banging with the seven footers? His name was Earvin Johnson.

Ty’s wiser than his years too. Responding to the awful verdict to not arrest the cops that shot Breonna Taylor, slapping their wrists instead of slapping cuffs on them by saying, “it’s unfortunate. Money is not justice”.

Now Boston are staring at defeat like a baby hook in the Garden. Although, Miami may be without the wrist action of Bam Adebayo. His 20 points, 12 rebounds, 4 assists and 2 steals will be as sorely missed as his wrist is smarting.

With Butler’s usual silver service a little scuffed, Herro polished half of his threes and went 9-for-11 for the rest of the field as he put this team and game on his slight but strong frame. Despite strong outings from Marcus (10 points, 11 assists) and 21 and 9 rebounds from Jaylen Brown for the C’s the Heat cooled off Boston like the coming fall.

Jayson Tatum had 28 in just one half (Tyler 18). Unfortunately, he couldn’t buy a bucket in this first two-quarters though.

Herro could however. A whole pail, as it rained in South Beach with his torrential talents. They say the kid with a 14.8 point, 4 assist and 5.7 rebound averages from the clip this postseason ate the Celtics alive.

Time to finish your dinner.