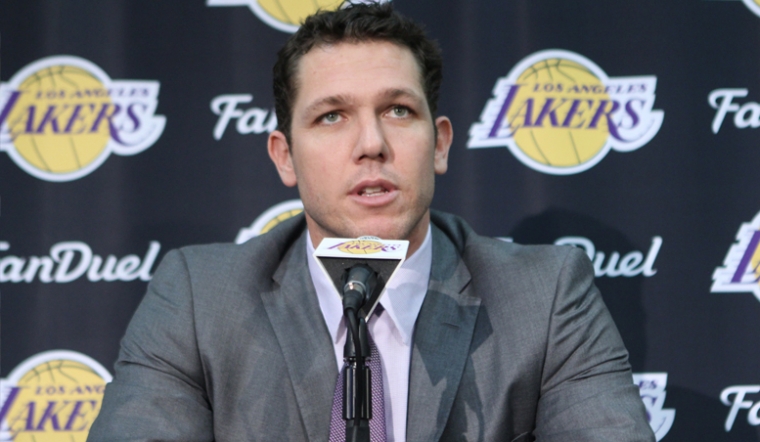 That’s what it was made on Tuesday via press conference as the Los Angeles Lakers introduced Luke Walton to the media as the franchises new head coach.

He’d already been named to be last years head Byron Scott’s successor months ago, but after King James Cleveland Cavaliers handed his Golden State Warriors’ the NBA Finals pink slip this week the time has come for the young coach to sit behind his desk and take to office as the Lakers Buss brass write his name on the frosted glass.

As a new door opens Walton closes one on a historic season were as an assistant in the Golden State of California Luke helped the dubs tune up a 73 game regular season record. Beating that of head coach Steve Kerr’s former Chicago Bull team alongside Michael Jordan during his clutch legendary playing days. Walton had an even bigger part of that leading the team to an unbeatable run at the head to start the season whilst Kerr was coming back from an injury to that very part of his body.

The then potential coach of the year may not have got enough credit for that…but he will now.

After the Lakers gave the Warriors their blessing for Luke to finish his year up with them before cleaning out his locker, Bill’s boy headed across California for the biggest break of his career.

“I am thrilled to come back down here and have my dream job, which is to coach the LA Lakers,” Walton began after General Manager Mitch Kupchak introduced him to the people he’ll be taking all sorts of questions and comments from this season.

Must Read:
Randle To Play Today

And it only seems like yesterday Mitch was introducing Walton junior to the associated press as a young rookie player. Now tonight with the second pick in the NBA Draft for the second year running Luke will look to lead the next generation of Lakers and possibly the future franchise face that replaces retired legend and former teammate (future assistant?) Kobe Bryant. The Lakers would love to choose the most hyped future star since LeBron, Ben Simmons but he’s Philly’s stake. You really think the Sixers are going to let the Lakers take another one of their kids? Your lottery money should be on Bean trained Buddy Hield becoming the Lakers new friend.

Either way and whoever Luke’s Lakers can attract in free agency (ignore those King James rumors, he’s not leaving his throne. And it looks like if Kevin Durant leaves Oklahoma it will be for Coach’s former Warriors), Walton vows to bring “fun” back to the Hollywood franchise. Adding that feeling good equates to playing that way and stacking up W’s instead of feeling like a loser. This young coach is perfect for this young team. The precision perfect passer as a player looks to pass on his saavy court knowledge and experience to some players who are about to go through exactly the same thing he has. And even though his former teammate and fellow kid coach Tyronne Lue just beat his Golden State, Walton can take what he learned from the Dubs and apply it to this new Lake Show. Especially if he runs the ‘Death Lineup’ in downtown L.A. with these fast talking and dribbling kids. With D’Angelo Russell and Jordan Clarkson in the backcourt and Julius Randle in the middle with the dunking Larry Nance Jr and whichever number two these Lakers make the centre of it all. This death by Showtime could run everybody off the court. What a time for young Hollywood to be alive!

Luke adding to our confidence in a presser streamed live on Facebook, “We’re going to play a brand of basketball that the L.A. fans will appreciate. We’re going to compete!”

He already sounds ready to lead doesn’t he?

Welcome home Coach! The show is yours!