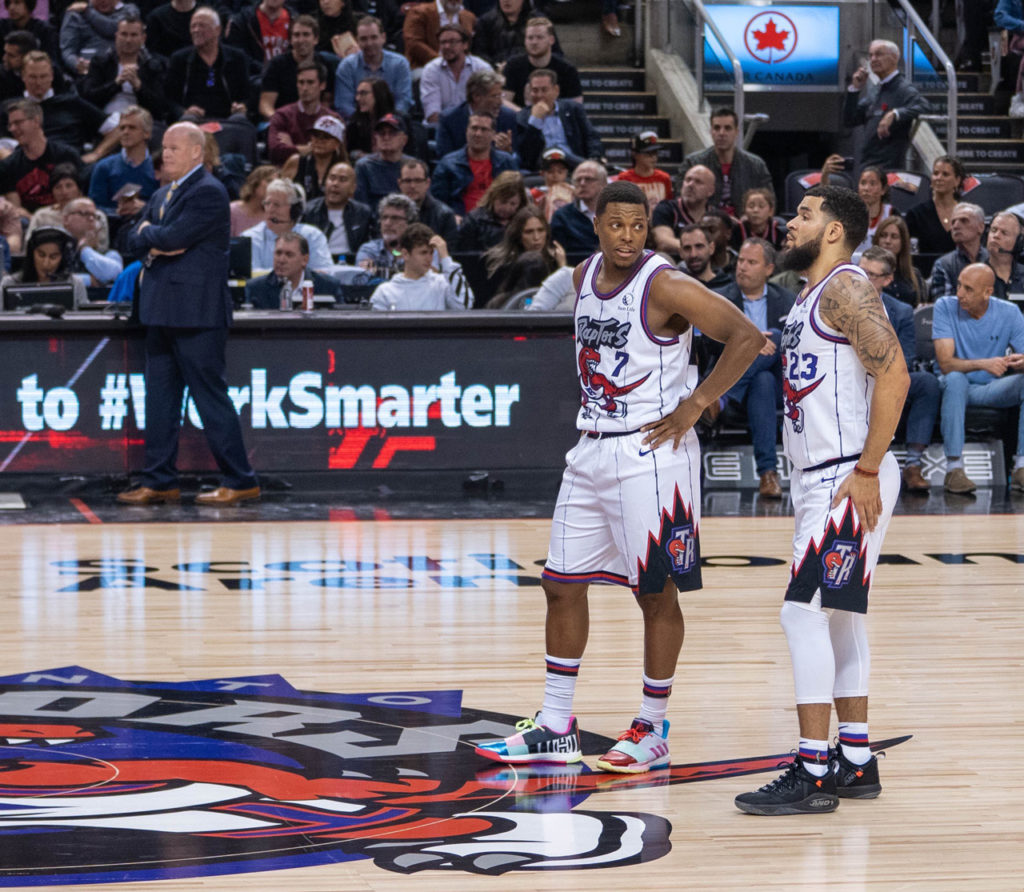 We The 1995. Toronto Raptors Claw Back The Jurassic Park Days

So fresh, so clean like ‘kast, or that new Andre 3000 and Big Boi beautiful 30 feet mural of Outkast down in the A. Up in the 6 last night fans were poppin’ tags like it was the owl of October’s very own Drake night again this month.

As the really big rings of Kyle Lowry hung in the Nike, “Jumpman, Jumpman, Jumpman” Jordan air longer than his 33 year old body really should allow on his way to a picture perfect, instant replay lay-up, this was truly a throwback. He almost looked like the Mighty Mouse of Damon Stoudamire back in 1995 for the dino’s and it wasn’t just because of THAT hardwood hustle.

The Toronto Raptors took it back to their original ‘Jurassic Park’ days of 1995, like Mitchell and Ness or Samuel L. Jackson minus an arm instead of an eye for a real hardwood classic, big picture. Decking their court out in that old parquet from back in the day, centred around that iconic, classic logo, basketball bordered by the ball munching dino ones in the mid-range.

Not to mention suiting up with the Barney of the old dinosaur uniforms, to teeth-to-teeth match for the instant vintage of a true classic jersey that over the last decades from thrift stores to official rereleases have made the statement of never being extinct with their own big bang.

This back to the future fit in this streaming age of an iPhone in every held hand took it back to television sets in every household for the jumbotron static, inspired introduction.

And the game itself too was a classic for the reigning NBA Champions against the Orlando Magic with the old tricks of their trade. Even with the legendary Leonard doing big things out in Hollywood with the Clippers.

Hey, hey, hey. Laugh now cry later because this night was as inventive as whoever came up with that Drake ‘Find Your Love’ Kawhi remix.

Most improved superstar Pascal Siakam added a shot clock 24 to Lowry’s 26 as the Raps wrapped up the Magic 104-95, with Orlando this season looking for their first 100 like a student who wants to ace at least one exam.

Hey a win would be enough for this team that needs to learn how to pass like James Harden.

A career high 24 from Jonathan Isaac and 11 from ex-Raptor Terrence Ross wasn’t enough for the Florida side as improving raw star Markelle Fultz’s 13 was unlucky for some (him) when he was all over the floor, falling after a VanFleet cross and dagger.

Big Spaniard Marc Gasol was also back with a double/double of 10 and 10 in points and rebounds, whilst Fred VanFleet-whose Steph like clutch splash against Curry in last seasons NBA Finals was the straw that broke the Warriors back for the last time Golden State lead a game-had 14. OG Anunoby 12.

But we all know what the high point was this night.

Celebrating 25 years in the association, expect these jerseys to be popping everywhere from Canada to the Far East of Harajuku’s fashion capital in Tokyo, following Toronto taking off against the Rockets in last month’s NBA Japan games in the land of the rising Rui.

Last night in the T-Dot was some McGrady vintage court cousin kinship. This timeless throwback’s texture was so traditional Toronto you almost expected Raptor legend Vince Carter to be there with the hops for his basketball barely, on the highlight reel that was his nightly slam dunk contest besting lay-up line down his legendary lineage.

Now how fitting would it be to bring this back one last time to get Carter’s Air Canada homecoming for his final game in The Six right? Soaring as a record breaking 22 season Atlanta Hawk for one last dance and one last dunk.

Must Read:
Kawhi Leonard and Paul George Rage Against The Laker Machine For The Battle Of Los Angeles

One last take off before it’s all took off.

Now that would be fly.