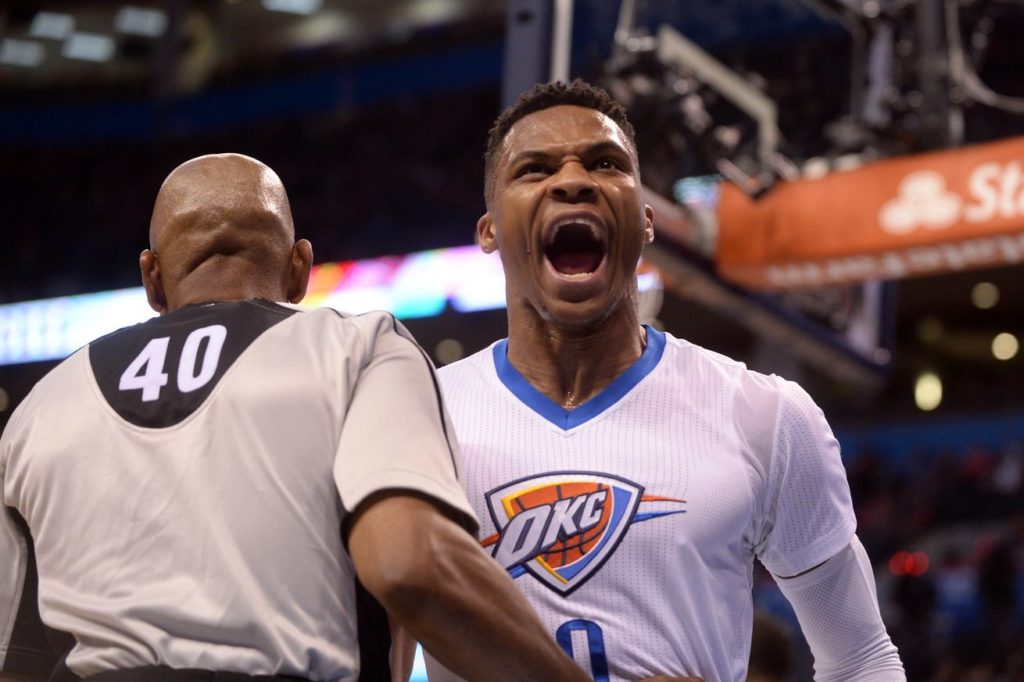 Don’t worry about Game 7…you aint going to see it!

113-99 was all she wrote the night before Friday the 13th, as it was unlucky for the San Antonio Spurs as the Oklahoma City Thunder put them to bed in a Game 6 nightmare. Kevin Durant played Freddy Kruger with 37 points, 9 rebounds and 2 assists. Whilst slasher Russell Westbrook cut down the nets again with more daggers in the form of 28 points. Shooting down the Spurs’ series like he did in San An, Game 5. Or that Game 4 momentum swinging, circus, clutch shot three that hit everything, including the iron, backboard and the rafters in the roof they’ll soon hang banners from before going down. Did you see it? Because most of his teammates played monkey emoji as they couldn’t believe their eyes.

Believe it’s over though! Game…set and maybe even career for Tim Duncan? The greatest Power Forward of all-time isn’t calling it quits like Kobe just yet after 20 years of service. But who knows come press time? The 40 year-old greatest Spur out in the Wild West needs to have “a think about life”, but fundamentally you know the robot would like to pass on another crafted championship off the assembly line to like minded prototype player LaMarcus Aldridge, along with the Texan torch like the Admiral did to him before David Robinson left port.

Still with Timmy, Tony and Manu’s future up in the air at least their dynamic duo ones isn’t. In the wake of the big-three, post man Aldridge and reigning Defensive Player Of The Year (again), repeating like Curry after a bad night, Kawhi Leonard have enough room on their fingers for many rings to come.

Still in OKC they have the ‘dynamite duo’ and the greatest one, two punch since Shaq and Kobe out in the year 2000, dynasty made Lakerland. How can we not feel the need to talk about Kevin? Next to King James, Durant has his own throne and he’s the leagues last Most Valuable Player (Hey Mom!) since some guy called Steph Curry with some “shot”. And next to Chef Curry’s greatest in the game, video game perfect play comes another unconventional Point in the changing of the guard, small ball revolution of this new hoops world with the sliders rolled to 100. And the most fashionable player in the Association also looks good on the hardwood catwalk his sick sneakers slide and polish. As a matter of fact he may not be better, but the dunking dynamo Russell Westbrook is electric and a more exciting and entertaining player than the baby faced assassin.

Yeah we said it…that’s what the comments section is for.

Now out in the go hard or go fishing Oakland the only thing that stands in the perfect partnerships way is one MVP and his band of Warriors and brothers ready to splash. From Klay Thompson to Draymond Green its all golden in the state of California. But sometimes it rains on that side of the Pacific and the Thunder are about to hit town like an umbrella and waterproof day. And you best believe Westbrook heading back to the state that held his UCLA alumnus can run that Golden Gate Bridge into the water like TMC.

Just look at his face. The fire. The desire. The 73-game, best of all-time ‘Dubs are having an even better year than their champagne campaign last, but these Warriors have been wounded and if the Thunder want to strike them down too their time to do it is right now.

Must Read:
Philly's New G.M. Is A Brand Name

Sorry ‘Bron but you don’t need to worry about the next round…THIS is the NBA finals.