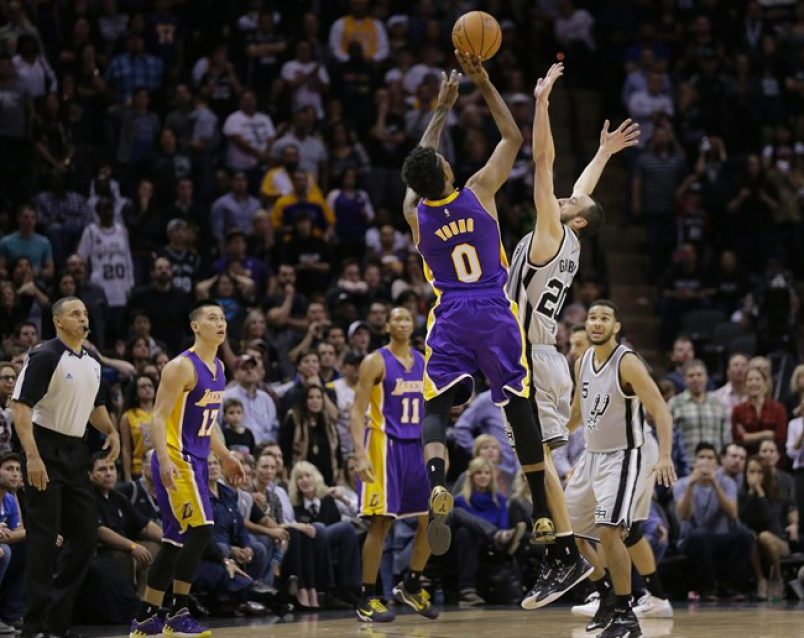 “Once it left my hand, I kind of knew it was cash,”

Money! That’s what potential ‘Sixth Man Of The Year”, Nick Young is for the Los Angeles Lakers right now. And to think two days ago we picked Jarrett Jack for this years best reserve. To think just a year ago we put him at number 60 for the ‘Top Microwave Players Of All-Time’. Like he replied on Twitter…”weak”!

You can call this an apology.

29 points, 6 threes and one overtime. That’s how much Young needed to swagger as the so-called lowly Lakers prevailed 112-110 over the reigning champion San Antonio Spurs. The best veterans in the game where nothing against Young whose feeling as Forever 21 as the clothes he rocks off court.

Still on it the fellow number zero is anything but this number, like fellow microwave hot bench player Jarrett Jack. He may be the Jack In The Box, but Mr. Iggy is making sure everyone gets tacos.

Basketball Buzz saw him in D.C. trying to help the Lakers beat the Washington Wizards with five threes last week. Still it took one more from 30-feet in O.T. for Young to go all Mr. Clutch out West in the nick of time off the pine. The great Manu Ginobili hounded him on defence like a Kobe doberman, but Swaggy P lent forward and lunged a perfect three that was all net cash with 7.4 to expire.

Then on went the Kareem, Sky-Hook goggles as this visionary guard flew back down court in a soaring celebration as now traditional as his postgame commentary comedy. Kobe may be 9 away from passing the greatest M.J. but right now this young Michael Jackson, Nick Young is overcoming the best in the association in real thrillers.

Ever since this kid came back from injury its all been thumbs up!