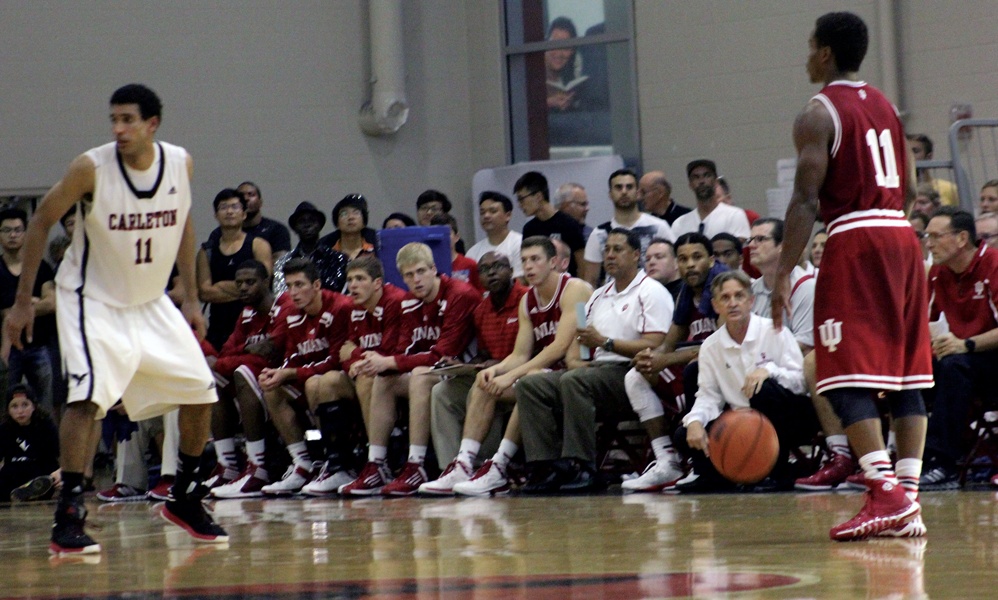 Ottawa, Ont — Indiana Hoosiers Head coach Tom Crean was advised by Wisconsin Badgers legendary coach Bob Ryan not to play the Carleton Ravens in their opening game of their Canadian tour for many reasons. Unfortunately or fortunately, the Hoosiers got a taste of Canadian University medicine before they actually faced the Ravens by dropping an unexpected 109-101 decision to Carleton’s city rivals therefore eliminating the “moment of surprise” which Bob Ryan and his Wisconsin Badgers and plenty of other Americans teams have faced when coming to the Nations Capital during their annual NCAA foreign tours.

Behind an energetic and inspired Indiana crowd, Tom Crean’s Hoosiers took full advantage of the short-handed Ravens who were without head coach Dave Smart and three-time league MVP and All-Canadian guard Philip Scrubb. Indiana jumped out to a 27-11 lead and never looked back on their way to a 95-85 victory over Carleton at the Ravens Nest.

Hoosiers Yogi Ferrell ignited the offense which connected on 11-of-17 first quarter shots. The Ravens offense was forced into one of their worst quarters in recent history with a 4-of-19 shooting display.

Ravens starting forward Thomas Scrubb finished with a game-high 34 points despite starting 0-for-9 in the first-quarter and needing 31 shots. Thomas who was also on international duty alongside Dave Smart and his brother Phillip Scrubb was released a few days prior to Canada’s Senior men’s last game in Spain and was available for the the highly anticipated affair between the historic Hoosiers. Scrubb scored 11 points in the second quarter to keep Carleton in the game as Indiana led 49-35 at half-time.

Carleton continued to play even with their Big Ten foes, but despite their best effort, Indiana’s combination of Yogi Ferrell (21 points, 5 rebounds) and freshman guard James Blackmon Jr. (19 points, 2 assists) was simply too much for the Ravens to over come due to their poor first-quarter. Carleton cut the lead on several occasions thanks to Scrubb’s 15-point fourth-quarter, the first-team All-Canadian candidate added eight rebounds and seven assists in the loss.

Carleton out-rebounded the more athletic Hoosiers 37-34 thanks to 20 offensive rebounds, most of them off long rebounds.

The Ravens (1-1) will look to earn their first win when it faces the Vermont Catamounts in their next game. The Catamounts dropped a 73-66 decision to the Ottawa Gee-Gees in the third game of their Canadian Tour.

Indiana (2-1) will travel back to the province of Quebec to take on the McGill Redmen in Montreal.