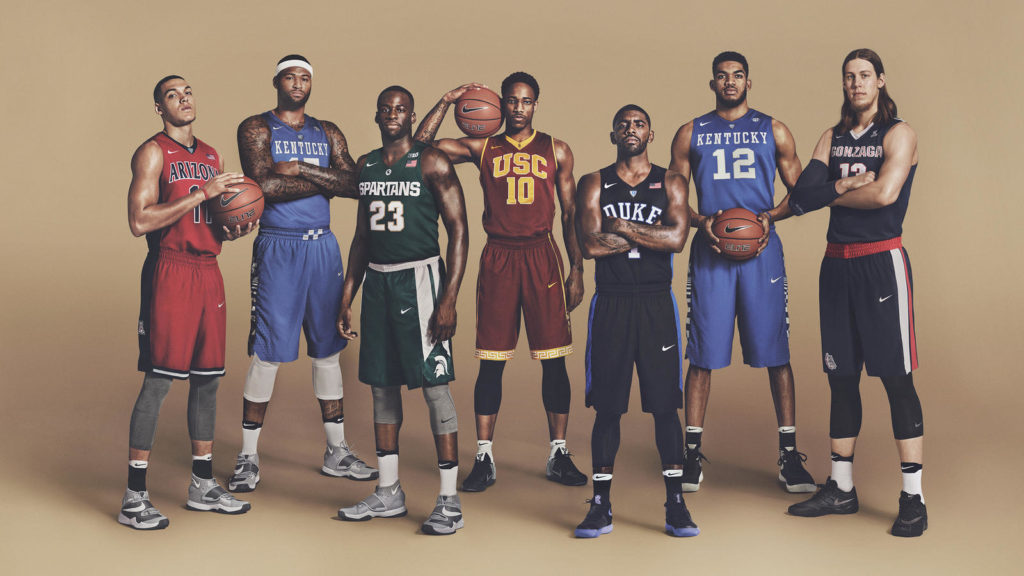 Get your brackets ready…it’s March!

Madness right? It only seems like yesterday we were ringing in the New Years or season. Still Bracketology is so crazy right now even President Obama gets involved from the Situation Room. But when you write your predictions out from your dorm make sure you sign it with a swoosh.

Nike just keep doing it when it comes to the game that doesn’t stop!

The leading sports apparel company that brought you the Air of Jordan aren’t short of endorsers. With everyone from Kobe to the King making their own Lion and Snake swoosh symbol signatures. But leaving the NBA behind somewhat for the month of basketball that is dominated by college hoops, Nike have a special NCAA campaign laying claim to these weeks.

Getting ready for the Big Dance in Houston, Texas, Nike with a hint of a Team Flight print advert, throwback testament are taking some of the NBA’s youngest and best stars back to a time when these young princes were just Cinderellas looking for the ball in a month that turns students into heroes.

This years number one draft pick by the Minnesota Timberwolves Karl Anthony-Towns is back repping for his University of Kentucky like it was last March and he was still trying to cut down nets after almost going unbeaten. The potential Rookie of the Year is joined in big U.K blue by fellow Wildcat alumnus DeMarcus Cousins who now relates to the throne as a King in Sacramento.

Those big stars are joined by the Golden State Warriors big third Draymond Green, as the Dub rocks his green Michigan Spartan duds. Standing alongside a player he faced in the NBA’s own court crazy, final playoff picture last season in the form of Cavalier Kyrie Irving who was the devil of a blue Duke player before Cleveland. The championship legendary, storied Boston Celtics’ Kelly Olynyk represents for Gonzaga too for a sports brand that represents around 69% of the players participating in the flight for the Final Four in this following fortnight.

Must Read:
City To City. Worst To First

Toronto’s very own Demar DeRozan (USC) of the Canadian Raptors and the player that should have won the Slam Dunk Contest in the 6 with his Orlando Magic Mascot vertical Aaron Gordon (Arizona) round out the magnificent seven players honoring their alumnus colors in this homage. Still as Michael Jordan gives way to Air Gordon you can’t forget the legends and UConn’s own Diana Taurasi and Sue Bird, to go with Tennessee’s Tamika Catchings leads the WNBA greats marching towards the big brass band beat of a season of bleeding colours and creeds, face paint skin deep.

The magic of this game and it’s kings and queens…it’s a kind of madness!