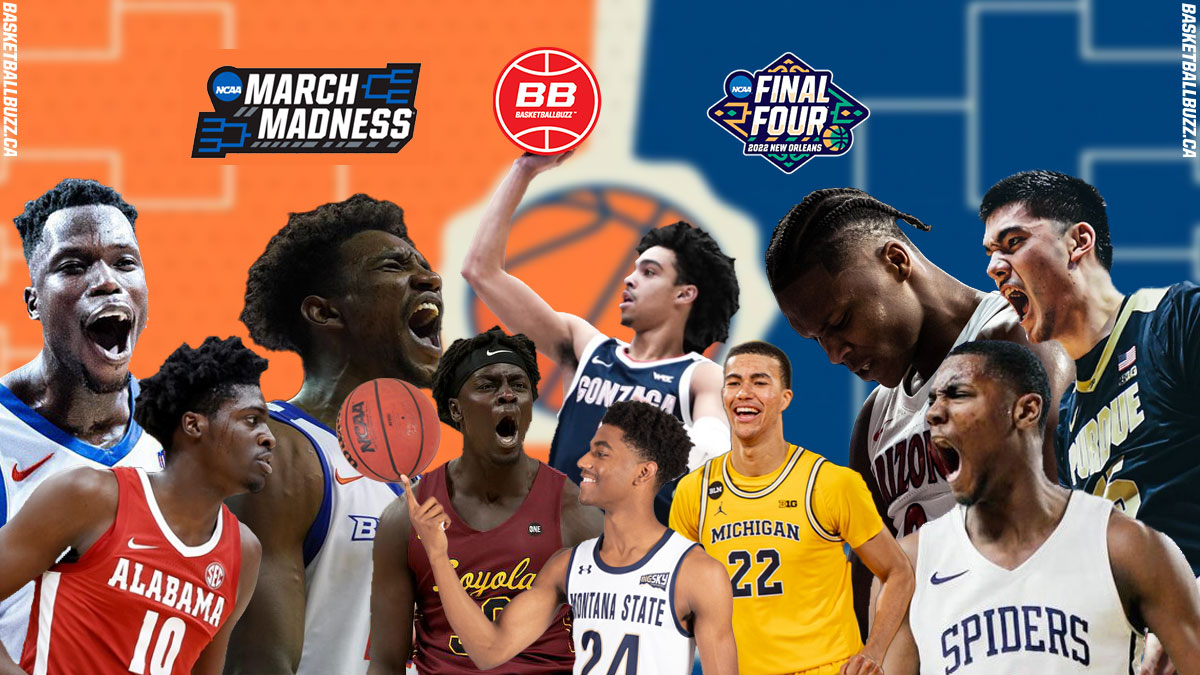 Undoubtedly, the 2021-2022 NCAA men’s basketball season was one of the most exciting and entertaining in recent memory. Filled with action packed non-conference games, the competitiveness spilled over to the regular season as teams fought hard for a spot in the big dance.

From a Canadian basketball perspective, it was as good as it has ever been, with multiple players making tremendous impact as their respective teams reached the top spot in the rankings and took home conference titles.

Overall, a total of 30 Canadian-born basketball players, from 18 cities, four provinces and spread out across 23 teams, have qualified for the 2022 NCAA Men’s March Madness division I tournament. The number represents a slight increase from the previous record of 29 players, a mark which was established in 2015. Last year, 25 Canadians competed for a national championship.

The Gonzaga Bulldogs (26-3, 13-1 WCC) featuring senior point guard Andrew Nembhard (Aurora, Ont.) spent the majority of the season at the top of the national rankings and locked-up the overall number one seed of the tournament.

Nembhard led all the Canadian players in assists at 5.7 per game and boasted one of the best assist to turnover ratio’s in the country. The Bulldogs are heavy favourites to return to their second consecutive championship game and have a strong probability to win their first NCAA title in school history.

The Arizona Wildcats (31-3, 18-2 Pac 12) went from an unranked team in the preseason to a number two spot in the final rankings and an outright number one seed in the tournament. Sophomore guard Bennedict Mathurin (Montreal, QC), put the college basketball world on notice and was selected as the 2022 Pac-12 conference player of the year and is a semifinalist for the Naismith Trophy for the best player in the country.

The Purdue Boilermakers (27-7, 14-6 Big Ten) feature three of the toughest players to guard in college basketball in electric point guard Jayden Ivey, Trevion Williams and seven-foot-four Canadian sophomore center Zach Edey (Toronto, Ont). The Boilermakers reached the top spot in the country for the first time in the history of the program.

Despite playing limited minutes, Edey’s impact was felt across the boxscore with averages of 14.6 points, 7.6 rebounds, 1.3 blocks per game. Edey finished with the second-highest field-goal percentage (.659%) in the nation

Strength of schedule paved the way for the Michigan Wolverines (17-14, 11-9 Big Ten) to a number 11-seed in the south region. A disappointing season otherwise, the Wolverines struggled with consistency, with just three multiple game winning streaks all season.

Highly touted Canadian guard Caleb Houstan (Missausaga, Ont.) has had an up and down freshman season and is learning the college basketball game on the go. At six-foot-eight and with precise three-point marksmanship, Houstan is key to unlocking Michigan’s success. The 19-year-old will need to stay aggressive and contribute offensively for the Wolverines to have any shot of making a deep NCAA tournament run.

The Boise State Broncos (27-7, 15-3 MWC) came-up a game short of making the NCAA tournament in 2021. Led by the dynamic duo of Abu Kigab (St. Catharines, Ont.) and Emmanuel Akot (Winnipeg, MB) the Broncos improved on every aspect of their game to win their first ever Mountain West championship and earn an automatic entry.

Must Read:
The Chilling Adventures Of Sabrina Ionescu

The Richmond Spiders (23-12, 10-8 A-10), a team that returned six seniors, got a late key basket from Canadian forward Matt Grace (Hamilton, Ont.) to propel the Spiders to dance for the first time since 2011. Nathan Cayo (Montreal, QC) a 1300-plus point career-scorer played a key role in the Spiders success and will be counted upon as the Atlantic 10 champions look to extended their winning ways.

Representing the Big Sky conference are the upset minded Montana State Bobcats (27-7, 16-4 Big Sky). A tough, do it by committee team, that comes into the tournament on an eight game winning streak. Dancing for the first time since 1996, the Bobcats feature six-foot-seven spark plug Mohamed Abdul (Ottawa, Ont.) and sophomore guard Kellen Tynes (Dartmouth, NS).

Editor’s Note: Eliel Nsoseme from the Georgia State Bulldogs was born in Kinshasa, Democratic Republic of the Congo, but played prep high school basketball in Hamilton, Ontario and was omitted from this list. Furthermore, upon further research based on a tip from one of our readers, Marseilles Caston (Windsor, Ont.) from the New Mexico State Aggies is no longer on the roster and has also been omitted from this list.