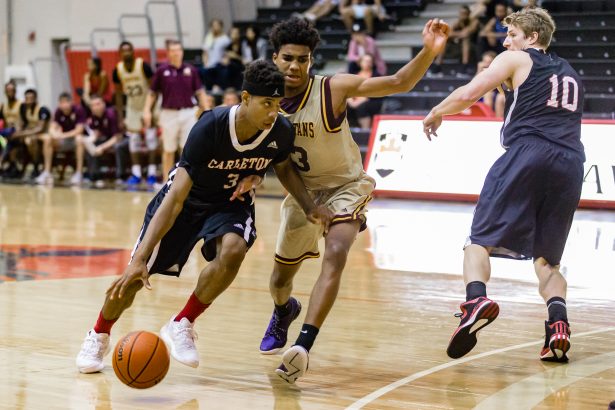 For the first time in history the Carleton Ravens men’s basketball team went undefeated in the Can-Am Shootout. Just as people were beginning to think the Ravens’ astonishing momentum would finally die down, they surprised them once again – closing out their NCAA exhibition schedule by beating division II St.Thomas Aquinas College 84-69.

The first-half of the game was controlled by the Ravens’ determination to go after rebounds, as well as their passing and their fast-paced tempo – led by Kaza Keane, Marcus Anderson and Connor Wood.

One of the new additions to the team, Mitchell Wood – brother of Connor Wood – brought his Guelph toughness to the Ravens this year; as it was clear that he was the anchor man on defense.

When the second-half started, St. Thomas Aquinas Spartans came out with a different attitude. They out-hustled and outscored the Ravens men in the third-quarter, 27-points to the Ravens’ 26. The Aquinas shot an astonishing 59% from the field in the third-quarter as they got some easy buckets after forcing multiple turnovers. Luckily for the Carleton, Marcus Anderson & Ryan Ejim refused to let the opposition run away with a big lead, as they both made some much needed buckets to keep their team in the game.

In the last quarter, it appeared as though the Ravens knew what was at stake (undefeated) as they finished strong and acted like the champions their fans are used to seeing. They closed out the game in a dominating fashion by continuing to do what works for them, by pushing the tempo, moving the ball around, and playing great defense. All but one player got on the scoreboard for the Ravens, nonetheless, every player contributed to the team winning the game. For all the new additions to the Ravens, the team pleasantly surprised us with their strong chemistry.

It was a hard-fought win, but to say that the Ravens are ready to defend their title is an understatement.

Must Read:
'The Truth' Is Told For The Last Time In Boston

It’s been quite some time since we have seen a team other than the Ravens raise the CIS Basketball championship trophy. After judging the Ravens performance in the Can-Am shootout, it’s clear that they haven’t missed a beat and are looking to continue to be the heavyweight champions that they have proved to be in the past.