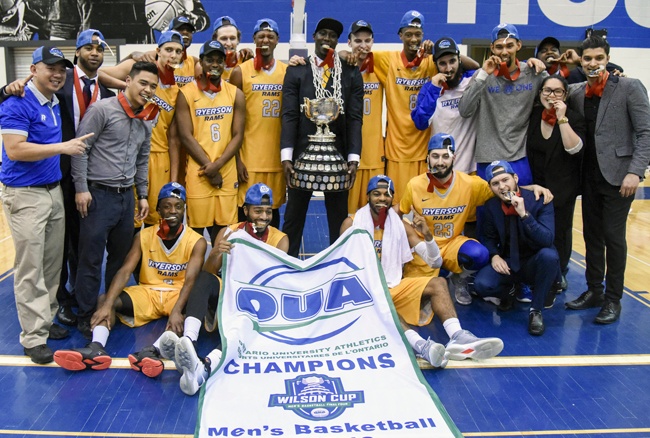 The “Best” season in Ryerson Rams Men’s Basketball program continues…The latest chapter authored by what will certainly go down as one of the greatest Ryerson sports team of all-time, went blow-for-blow with the 11-time CIS Basketball champs Carleton Ravens – landing plenty of body shots to withstand a historic 73-68 win to the delight of a packed house, of perhaps the best fanbase in country, alumni and everybody else associated with the university.

Fittingly, it was Aaron Best (Game-high 21 points, 5 rebounds , 6-13 shooting) who thanked the home crowd for giving him the support after winning their first-ever Ontario University Association Gold Medal. After-all, the fifth-year Best is the only current player on the Rams squad who can truly tell you what “started from the bottom, now we here” really feel likes!

After an early 8-2 lead Ryerson found themselves trailing 18-13 in the first-quarter and faced a deficit of 13 points at half-time as the Ravens dominated the offensive glass 9-1 holding the Rams to just 27 points in the first-half for a 40-27 lead. Carleton’s was paced by Connor Wood’s 20 points, 17 first-half buckets including 6-of-8 and 4-of-6 threes.

Adika Peter-McNeilly scored 12 of his 16 points in the third quarter, going 10-for-10 from the foul line to erase the double-digit first-half deficit by tying the game at 55-55. Ryerson, quickly grabbed the lead in opening minute for good on back-to-back jumpers from Aaron Best who fired-up the crowd and helped fight off a Ravens team so accustomed to wearing gold around their necks that most players simply refused to accept the silver.

CIS Coach of year, leading candidate Patrick Tatham and Rams will enter the 2016 CIS Final 8 Champions as the number one seed and are now just three-games away from their first-ever National championship and bringing the parade down to Carlton and Dundas. Now if that happens, you know the “6God” will be blasting down the speakers and who knows Drake himself may just consider becoming the Global Sponsor for the Ryerson Rams Men’s basketball program. #Hotupinthe6