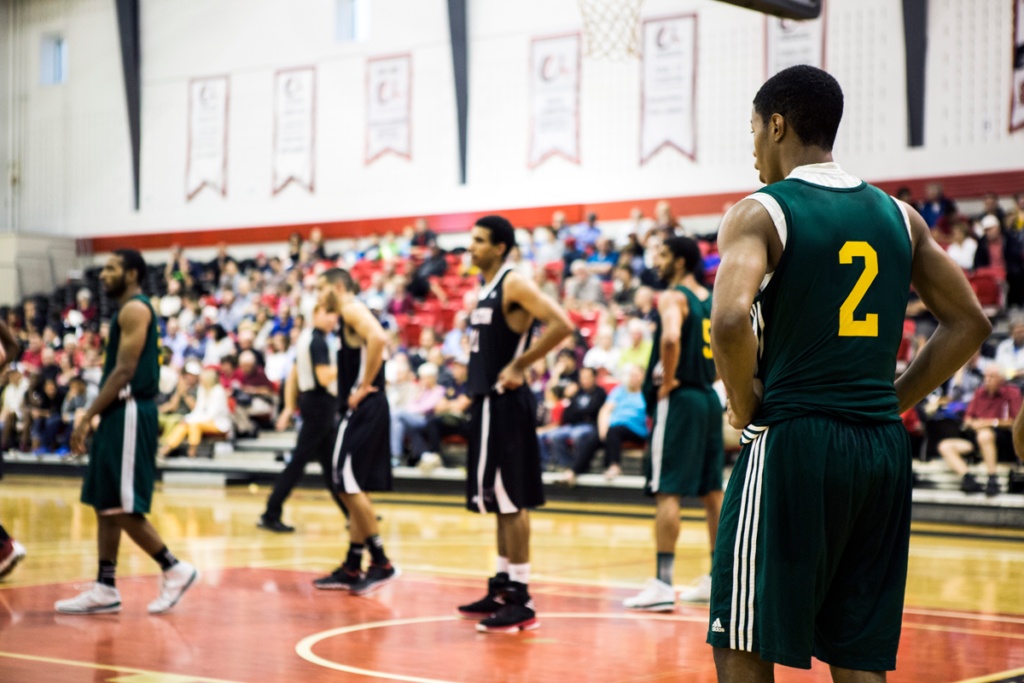 Ottawa, Ont – A night after taking 31 shot attempts against the Indiana Hoosiers and coming up on the short end of a 2014 opening season defeat, Thomas Scrubb took half the shots (13), wound-up with a triple-double (20 points, 13 rebounds, 10 assists) and led the Carleton Ravens to a hard fought 74-66 win over a motivated and well-prepared Vermont Catamounts squad from the NCAA’s American East division.

The fourth-year senior forward from Vancouver, B.C continue to show flashes of brilliance after his recent stint with the Canadian Senior Men’s National team. Unlike the opener against Indiana, Scrubb let the game come to him and played under control throughout on his way to his first ever career triple-double in a Ravens uniform.

Ravens guard Connor Wood came up huge on offence in the fourth quarter for the Ravens, drilling three of his six triples in a tight and well played affair to help the 10-time CIS champs close out Vermont and avoid a 0-2 preseason start. Wood finished with a game-high 24-points on 9-of-17 shooting.

“I found myself open a few times off of the iso-ball screens and knocked a few early shots and got in rhythm” discussed Wood during post the post game interview.  Victor Raso also reached double-figures with 11 points on 3-of-11 triples.

Vermont continued to get solid production from Canadian freshman point-guard Trae Bell-Haynes by exposing the Ravens usual tough defence with a team-high 17 points on 7-10 shooting. Bell-Haynes played well after a rough shooting performance against the Ottawa Gee-Gees.

“Everyone is being supportive I had a bad game yesterday, coaches are being supportive and lifting you up, nobody is getting down on you, it’s like a big family.” commented Bell-Haynes on his overall experience with the Catamounts thus far.”

Fellow Canuck Drew Urquhart (Vancouver, BC) showed his toughness inside with 5 points and two blocks in 13 minutes off the pine and understands that he will to continue to develop if wants to see more minutes. ” I’ve become tougher since I’ve gotten here, right now I need to guard more positions in order to get more minutes.”

“Obliviously you are going to get made fun of if you have an accent so having two of us really helps, we have each other’s back, specially here in Canada when all the Americans are asking us what are (Loonies & Toonies)?” expressed Uruhart when asked to describe his current relationship with Bell-Haynes and his current experience with his new club.

Carleton got off to a better start by limiting the Catamounts to just 4-11 shooting to grabbed a 18-13 lead in a low scoring first quarter. Vermont ‘s Kurt Steidel dropped in eight points in the second quarter for the Catamounts who outscored the Ravens 24-21 in the quarter and trailed  Carleton 39-37 when the second-quarter whistle sounded.

Playing without Head Coach Dave Smart and three-time CIS Most Valuable Philip Scrubb Carleton took control of the game in the third period on the solid play of Thomas Scrubb dominate quarter with eight points and five rebounds. Carleton outscored Vermont 19-12 and led comfortable at 58-49 at the end of three-quarters.

Vermont behind Trae-Bell-Haynes attacking and timely three-point shooting kept them in striking distance and despite outscoring Carleton 17-16 in last quarter the Catamounts dropped their second straight game to CIS opposition.

The Ravens (1-1) will see the return of Head Coach Dave Smart and MVP guard Philip Scrubb from International duty when it takes the visiting University of Chicago Illinois on Thursday at the Ravens Nest.