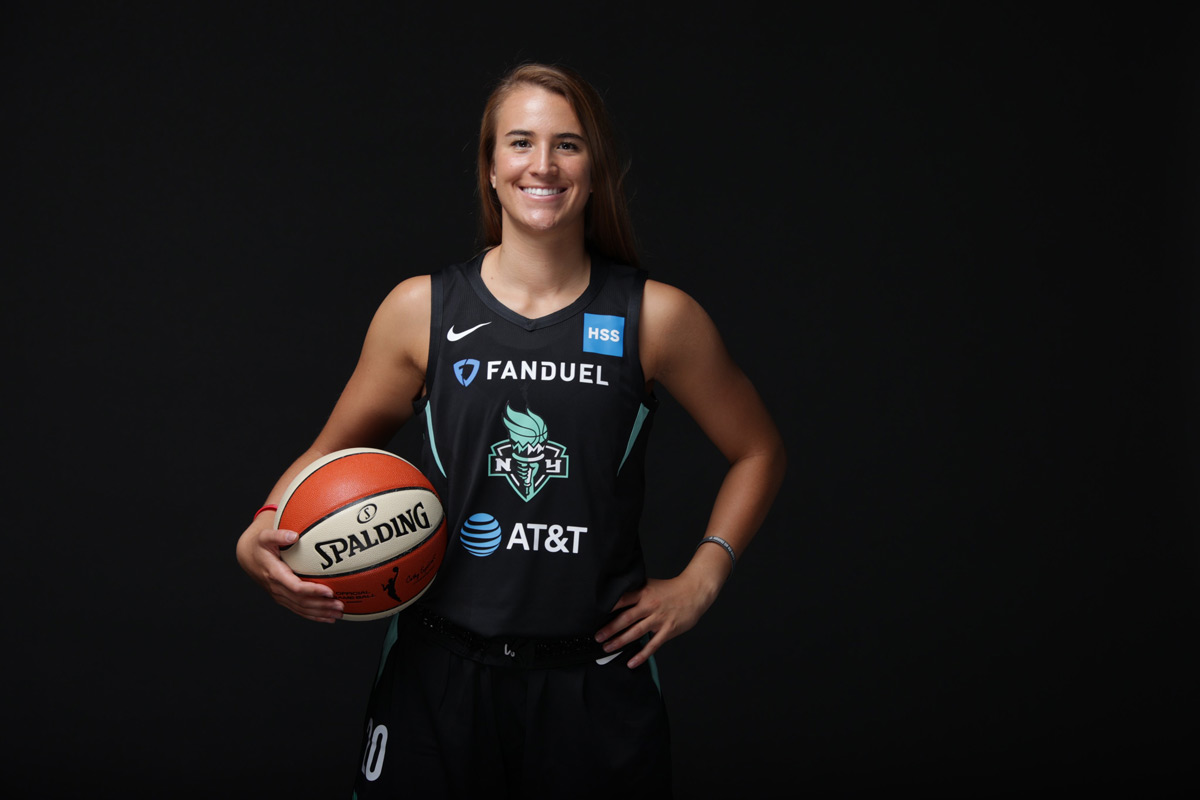 New York, New York. Sabrina Ionescu is so good you wish you could draft her twice.

But how about number one?

Because now it’s Liberty…justice for all. Here’s your new statue for the women’s game ready to carry the flame.

But in a year we’re she was meant to travel with Team USA to Tokyo for the 2020 Olympics in Japan, who knows when we’ll start this fire.

Rolling out the orange carpet for the WNBA’s first virtual draft live from your living room, the Coronavirus made sure every draft selection would be chosen at home like selecting Miller time from your fridge for this weekends Netflix binge of ESPN’s ‘The Last Dance’ 30 For 30 with Michael Jordan and the Chicago Bulls.

But at least the WiFi connection was stronger than a game of H.O.R.S.E. And that didn’t mean the best of the next couldn’t get turned up. Turning up at home in their Sunday best for the prom like homecoming of their first dance into the next step of their court careers, pirouetting on parquet like Kobe in the lane.

Now after a stunted season, from past to present, Jordan to Sabrina, the greatest to the new G.O.A.T. and the last dance to the first steps, it looks like a wonderful weekend for the men’s and women’s National Basketball Association.

Talking about Netflix, the ‘Chilling Adventures Of Sabrina‘ continue even if she missed her last dance like no one will this weekend at home, as the Mighty Duck Ionescu flies to the WNBA as the most highly anticipated number one pick since the 2016 Seattle Storm selected Breanna Stewart in an association of Sue Bird and Diana Taurasi G.O.A.T.’s. All for a player who looks to aforementioned belong in that Candace Parker and Lisa Leslie like legacy company of legend.

And of course, “With the first pick in the 2020 WNBA Draft, the New York Liberty select Sabrina Ionescu from the University of Oregon”.

How’s that for your next bite of Big Apple basketball alongside the Maple Mamba, number two of R.J. Barrett from this seasons NBA Draft fighting for N.Y. against the Brooklyn go hard Nets superstar duo of Kevin Durant and Kyrie Irving across the bridge?

Sabrina is now the statue of the New York Liberty and women’s game on an island of her own. Holding the torch with the book of Basketball playbook under her right arm.

The Liberty making mecca moves like Madison Square Garden to Brooklyn going loud even traded WNBA great Tina Charles (who tweeted her, “one thing about New York, when you take care of the city, the city takes care of you” congratulations) to seemingly get more Ducks around Sab like a flock of ducklings.

And if you want to talk about, “we are family” like all my Sister Sledge’s with me, then how about the sister act of the L.A. Sparks superstar sibling Erica Ogwumike (who was accepted by so many medical schools too for another profession of real heroes) being drafted by the Sabrina sisterhood in NYC before being traded to the Minnesota Lynx? A big three of sisters. One association.

Two players that will be staying in the Big Apples core for a new big three alongside Ionescu are 23 year old rising guard Asia Durr and Canada’s own Kia Nurse coming to New York’s aid.

Now if that wasn’t enough Sabrina Ionescu has just done it with a signature deal with Nike. Now it’s a must we get the P. E. shoes.

The NBA playoffs were meant to start tomorrow. But look what started today in the WNBA.

We just can’t wait for it to all start.

If you’re not as excited about the WNBA Draft as the NBA one right now when it comes to these Queens as the Kings commentator Grant Napear once said, “you don’t like basketball”.

Because people, men or women the first player in NCAA history to record 2,000 points, 1,000 assists and 1,000 rebounds, Sabrina Ionescu is already one of the games greatest, regardless of gender. And now from green to teal all that she will do for her classic career and this storied sport under the bright lights of the big city, like the neon entertainment core of Times Square remains to be seen in this New Year. Just like when she rewrite history on the date marked, 24/2.

But in the most moving moment of this couch quarantined draft, in a year of tragedy the WNBA selected number 2, GiGi Bryant and all her Payton Chester and Alyssa Altobelli friends and family that we lost on that fateful January day.

As a moved Vanessa Bryant thanked the WNBA for selecting her daughter and congratulated all this years draft picks via video, telling them to, “work hard, never settle and use that Mamba Mentality”. Expect that Gianna would have made it to the WNBA and been great as we watched her work like her Girl/Dad ambassador Kobe in the NBA brotherhood. From today Sabrina Ionescu will show us exactly how.

Time to get down to that unfinished business.