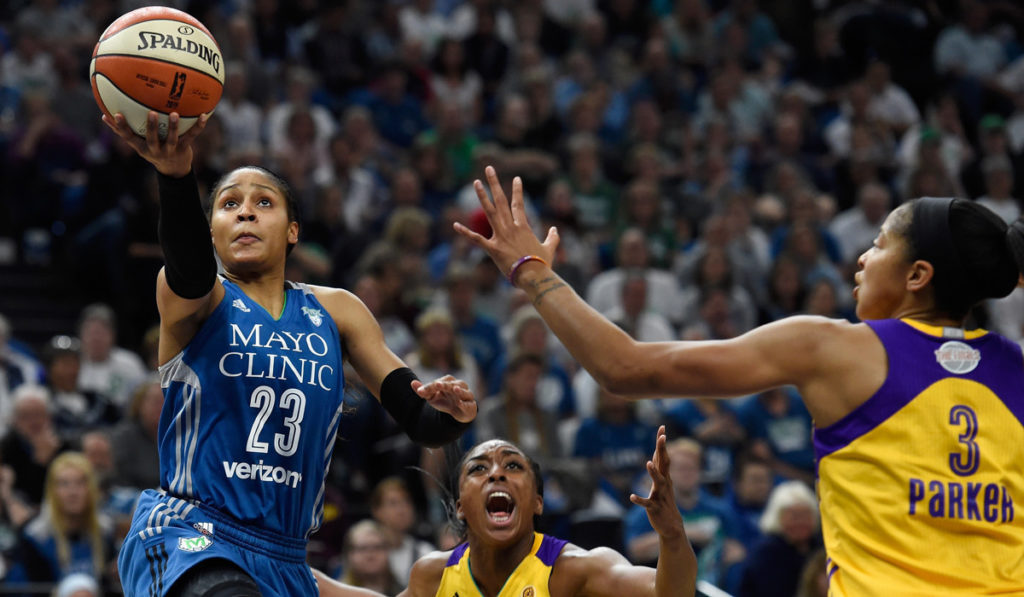 Lynx Take The Spark Out Of Los Angeles In Game 2

More from Maya. Sylvia drawing fouls. Seimone Augustus putting on a clinic like Minnesota’s Mayo sponsers. After losing by a clutch bucket in Game 1, Maya Moore and her Lynx came back in Game 2 of the 2016 WNBA Finals to garnish the Los Angeles Sparks with a 79-60 win.

Maya in Mayo lead all scorers with 21 points aswell as a reverse 12 in rebounds to go along with 3 assists and 2 steals for a legendary line from one herself. Her statistical power output lead to a 12 to 1 run in the second half and pumped the breaks on L.A. when they sparked 14 unanswered points late in the game in reply to the Lynx’s 17 point one after the third.

At the Target Centre with a bullseye on their back the home team made one last stand before their road trip to Hollywood and withstood all that the Sparks plugged them with, lead by Nneka Ogwumike’s 14 and 12. Superstar sidekick Candace wasn’t feeling it however with just half a dozen points and the L.A. Sparks were beardless in the fourth quarter following Alana’s clucth bucket in Game 1 that made all the Los Angeles Times newspaper clippings.

The headlines all read Moore last night however as Minnesota’s lead Lynx lead the break that broke down the Sparks. Her full court quarterback heave assist to fellow Olympian All-Star Lindsay Whalen for the lay-up struck gold and wad the turning point that halted anything the Sparks could throw at them.

Along with Seimone Augustus’ 14 and 13 points and 15 rebounds from Sylvia Fowles the Lynx were firing on all cylinders. Pumping up threes like pistons, working the lay-up line like an assembly one. Class was definitly in session as the Sparks were schooled.

Karl Anthony-Townes, Andrew Wiggins, Zach Lavine and Ricky Rubio of Minnesota’s NBA Timberwolves better be watching. This is how da kids get over the loss of legend and leader Kevin Garnett by being the future right now. Not tomorrow. But today.

Now heading to the golden state of California, the Lynx are really heating up, escaping the Minnesota cold to L.A.

We for sure have a series now and as the Minnesota Lynx look to tie the out of this world Houston Comets for most WNBA titles with four, Game 3 looks to be the momentum swing decider.

Home court advantage or not, all tied up with the defending champions, Los Angeles we have a problem.