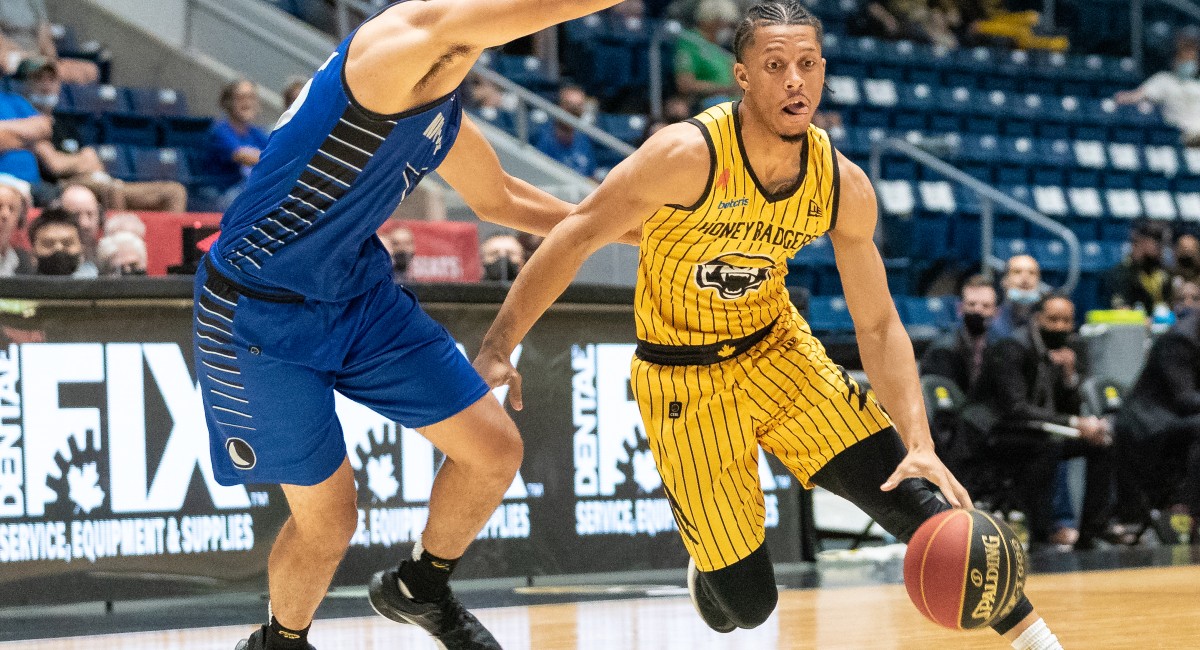 Lindell Wigginton drives past a Guelph Nighthawks defender on July 27, 2021, at the Sleeman Centre in Guelph. CEBL Photo

Lindell Wigginton drifted toward the sideline after hitting a game-winning three-pointer against the Guelph Nighthawks, yelling into a stunned arena while his Hamilton Honey Badgers teammates gathered around, grabbed him and hyped him up.

In that moment, it was as if Wigginton released a thousand frustrations.

“That was a big win for us,” he said later, speaking to reporters in a post-game scrum at the Sleeman Centre in Guelph, Ont.

Guelph hounded Wigginton the entire game with stifling defence, throwing double-teams at the superstar guard from Dartmouth, N.S., as soon as he crossed half-court.

He entered the contest as the league-leading scorer and a serious contender to unseat Edmonton Stingers guard Xavier Moon as the CEBL’s reigning two-time MVP.

But Wigginton didn’t make a shot in the first quarter and had only three points at the half, visibly irked by the extra defensive pressure his play this season has warranted.

“I take it as a sign of respect, teams double-teaming me,” he said. “I’ve just got to try to come in and adjust.”

Wigginton is neck-and-neck in the MVP race with Moon, who helped his own cause with a 39-point explosion Tuesday in a blowout win over Fraser Valley.

If successful, Wigginton would be the first Canadian MVP in league history. He’s also an obvious favourite — if not a shoe-in — to win Canadian Player of the Year.

In interviews, Wigginton says all the right things — it’s an honour to be in the conversation, but he doesn’t really care about the awards. He’s here to win. Still, when pressed, he’ll acknowledge his status as one of the CEBL’s elite players.

“I think I’m one of the best,” he said. “Any situation I’m in, I want to be the best. I definitely feel like I’m coming out here and trying to be the best — the best me — each and every night.”

Wigginton is in many ways an emblem of what the CEBL hopes to be for Canadian players outside the NBA. That he is here at all, taking extra reps with Hamilton after high-scoring stints with the Iowa Wolves of the NBA G League, speaks volumes.

“I know that’s been kind of a knock on him in years past, but I’m wanting to let people know, this kid plays winning basketball.”

Wigginton thrived as a catch-and-shoot guard at Iowa State University, where he was Big 12 Sixth Man of the Year in 2019. But at six-foot-two, he is undersized for a similar role in the NBA.

The major knocks against him as an NBA prospect were his passing ability and his ability to make shots off the dribble.

With Hamilton he’s had valuable opportunities to develop on both those fronts, playing ample minutes at point guard and learning to feed his teammates out of double teams and in transition.

“He’s one of our top Canadian players in this country, hands down. And he’s proven it night after night, especially in this league.”

Schmidt is known for his ability to develop G League talent for the NBA, most notably Chris Boucher, a key front court player with the Raptors last season.

Like Boucher, Wigginton went undrafted out of a U.S. college but became an elite contributor in the G League, a minor-league feeder system for the NBA.

Wigginton still has designs on an NBA roster spot, and he’s likely helped himself with the impression he’s made in the CEBL, a league with several other players and coaches with G League experience.

“Respectfully, it’s all about Lindell,” said Kissi. “If you can manage that, you can beat Hamilton. Not to say that the other guys aren’t good. They play their role well, but he’s their engine.”

That night in Guelph, Wigginton missed shot after shot until the dam finally broke. His five three-pointers down the stretch and 17 second-half points were enough to help his team steal a win.

“I was frustrated,” he said. “It felt good to see some go in, and after I see a couple go in, that’s my moment.”

He’ll need more moments like it to wrest the MVP award from Moon, and hundreds more if he wants to contribute meaningfully in the NBA. But in moments like this, his teammates trust him.

“We know as a team where the ball needs to be,” said second-string Hamilton guard Cody John. “It needs to be in his hands, because that’s what he does. We’re all cool with that.”