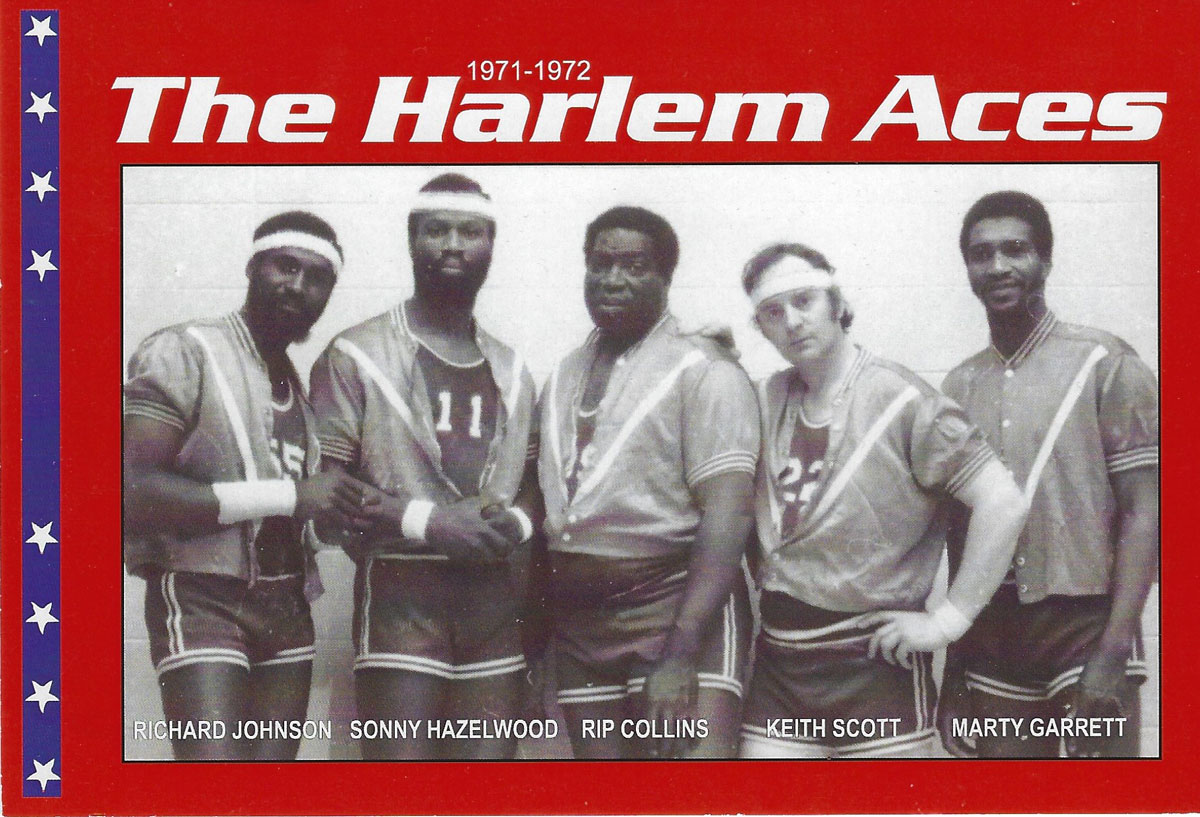 He guesstimates that he has played more than 7,000 games of basketball the last 65 years while traveling North America.

Covid-19, combined with recent health issues, may have slowed up his game appearances, but at the age of 85, Scott says, “I think I am making a comeback.”

Born April 17, 1936 in in Saint John, New Brunswick, Canada, Scott picked up his first basketball around the age of seven.

“I started with a pair of runners that I bought at a Salvation Army thrift store for 50 cents and a basketball that I found abandoned in the schoolyard,” notes Scott.

There was little, if any, basketball broadcast on Canadian television in the 1940s’ and 1950s’…so Scott received his early basketball education when traveling comedy basketball teams came to Saint John.

“There were teams like the Harlem Globetrotters, Philadelphia Giants and the House of David,” recalls Scott. “That’s where I got some of my ideas.”

It was at the nearby Victoria School outdoor basketball court, that Scott would spend countless hours in an attempt to recreate the comedy skills he had witnessed, while also inventing his own.

Scott quickly discovered the joy of having a basketball in hand.

“I invented new trick shots, like sliding on the ice halfway down the court while trying to get the shot away before ending up in the snow bank. I played year round no matter the weather. I spent a lot of time dribbling the ball, rolling the ball from one arm to the other and faking a pass then catching it behind my back.”

The 5-foot-11 guard would develop skills that would lead him to St. John High School League MVP status and a scoring title in Grade 12.

He kept the on-court tricks to a minimum though during his school years, “Back in that time, it wasn’t too acceptable to play show basketball. A lot of the coaches on the other teams did not like getting shown up too much. They didn’t like showboats.”

Have jump shot will travel.

“We were too poor for me to go to college, so I decided to hitch hike down to St. Petersburg, Florida. That is where the House of David was located,” recalls Scott, of the famous barnstorming basketball team that dribbled its way into people’s hearts from the 1920s’-to-1960s’.Keith Scott

“When I was young, they had come to St. John. I remembered them billed as “The Greatest Basketball Team in the World,” and if they were the greatest, that is who I wanted to play for.”

Despite friends and fellow players telling him, “That I would not make the team,” Scott impressed House of David player/coach Bobby Roth (1946-1959) and made the cut.

As part of the five-man unit, Scott had to throw away his razor with the team’s physical trademark being lengthy beards.

“All of the other players, except for me, were (college/university) All-Americans and it was a great experience playing with them (for two seasons). I learned a lot from Roth (Wayne State). They all played straight basketball and I was the only ball handler, so I did all of the tricks.”

Scott said his role on the team was “fun”.

But it was not all laughs, as sometimes his comedy routine of lying on the ground while dribbling the ball, would irritate opponents.

Remember, the House of David team was not like the Globetrotters, who played comedic basketball throughout the game against the same stooge team. House of David was up against legitimate local opponents every game.

“Show basketball really is show-off basketball and some opponents think you’re making fun of them. One of my (routines) was to dribble while I was laying on the floor and they would try to get the ball from me. It wasn’t unusual for me, every fourth or fifth game, to be kicked by another player from the other team that was trying to get the ball away from me. I was kicked quite a lot in a season. Some players just didn’t like getting shown up. Each game was different.”Keith Scott – Canada’s Basketball Gypsy

For example “while playing a teacher’s team in Providence, Rhode Island”, Scott was fouled and went to the free throw line where he swished both shots. Both shots with his back to the basket!

It was also during this time frame – with perhaps more than 200 games a year – that Scott had a two-game stint with the Philadelphia Spahs, a traveling opponent of the world-famous Harlem Globetrotters.

On the Globetrotters troupe at that time, was a young man by the name of Wilt Chamberlain.

“They (Globetrotters) were nice to me and Wilt was making a couple of dunks,” recalled Scott, who has also had hardwood time with Boston Celtics’ legend Bob Cousy.

Chamberlain, fresh out of college, was making an unheard of $50,000 salary to dunk to the tune of “Sweet Georgia Brown”, the Globetrotters official theme song.

Chamberlain would go on to become a seven-time NBA scoring champion, 13-time All-Star with two NBA championships. He is often mentioned in basketball’s GOAT conversation.

Scott would cross paths with the Globetrotters years later when he “asked for a tryout”.

He explains: “We were living in Quesnel, British Columbia at the time and I saw the advertising that the Globetrotters were playing in Vancouver. I decided to go down and give it another try.”

Globetrotters coach Leon Hillard, “Invited me into the Globetrotters’ lockeroom and I put on a ball- handling demonstration and they were all sitting there and watching me. Hillard said that I handled the ball OK but I did not fit in with what they were looking for.”

Scott would continue his comedy skills with the Canadian Road Kings and the Harlem Aces, also known as the Harlem Kings.

During his tenure with the Aces, Scott was billed as “The Showman.”

In one game with only three Harlem Aces available, Scott was asked to score.

Score, he did, dropping in 50 points against the all-star opponents.

He attributes Harlem teammates’ Monroe “Rip” Collins and Marcelo “Marty” Garrett for “teaching me a lot while on the road.”

Collins was a member of North Carolina College for Negroes (now known as North Carolina Central University) who according to the Associated Negro Press were crowned 1941 National Invitational Intercollegiate Basketball Tournament co-champions.

Scott has fond memories of traveling with the team: “I always loved to hear the laughter when we played. It kept me young. It was an unusual way to make a living…going from town-to-town. I would go through two or three pairs of sneakers a season.

“It just became a way of life on the road,” admits Scott, who confides that his longevity has been due to the fact that, “I’ve never smoked a cigarette, never taken a beer or liquor and never had anything to do with drugs.”

He has also been “blessed, with no major injuries aside from ankle sprains.”

Fascinated with wildlife since his youth, Scott gained further appreciation of such during his early years on the road.

“I was usually the designated driver for the team,” said Scott, driving a van coast-to-coast-to-coast on the sport comedy circuit. “I drove the side roads to the next game hoping to see wildlife. My teammates weren’t too enthusiastic about wildlife though – especially when they came to close.”

Since 1972, Scott has combined his two passions into one vocation.

Each calendar year he travels to schools to do a presentation on bear safety followed by a basketball demonstration and game.

The presentation includes slide shows with rare photos he has captured in the wild, along with various outdoor films he has produced.

One film is titled “Grizzly”, where during two summers in the Canadian Rockies he filmed big horn sheep. Elk, wolverine, a white moose and an 800-pound grizzly bluffing an attack.

Along with several published books pertaining to basketball and wildlife, he is also known as “The Bear Man”.

He has had several encounters with black bears, grizzly bears and polar bears: “I have laid down and sometimes rolled up into a ball to protect my vital parts. Twice I have had bears sniff my body and then move on.”

Following the school presentation, Scott, like a Pied Piper, leads the students to the gym to display his basketball dexterities with shooting and passing skills.

After many “oohs and aahs” from the amazed students, he lets various student’s play him 3-on-1.

No Alcohol, Drugs or Cigarettes

One of the messages Scott directs to the students is that, “I hope, I helped the kids when I tell them that I have never drank alcohol, smoked or taken any drugs. That is the main thing and it is a rarity today. I also tell kids…it doesn’t matter if you win or lose. The importance is that you keep playing.”

During the last two years, Scott has had a heart attack and stroke.

His persistent love to return to the game is valued during recuperation.

“When I first came back into the school gym, I couldn’t even make a layup or handle the ball. Now I can make layups and shoot outside. It is like a comeback now. At my age that may be hard to believe.

”I feel good. It’s just like I am a kid again starting all over.”

Editor’s note: The first time I met Keith Scott was on a basketball court in Fort McMurray – where his son Don Scott is Mayor. Keith was in his 70s’ and his ability with the basketball was still magical. With the Keyano Huskies college men’s basketball players on the sidelines watching, Keith Scott was once again hearing the “oohs and aahs.”