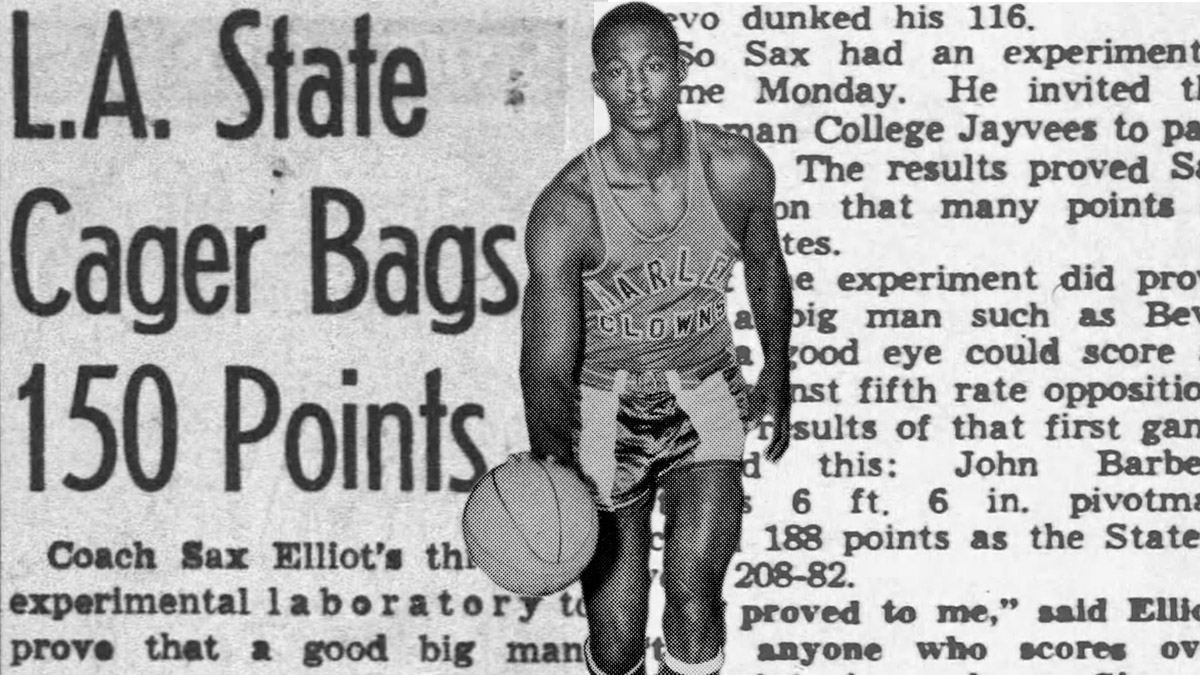 Someone scoring 100 points in a single game is more common than one would believe.

A quick research shows it has been done by more than 350 players world-wide.

It was on Canadian hardwood that Denham Brown dropped 111 points on February 7, 2002 during a 150-58 win for his West Hill Collegiate Institute in a high school thumping of R. H. King Academy.

If you are a fan of Canadian basketball you probably know this. Old news.

So it was surprising to find that John Barber and Sax Elliot are footnotes in basketball history.

They should be more recognized.

It was at Los Angeles State (now California State University at Los Angeles) that Barber, a student/athlete on the Diablos men’s varsity basketball team, and Elliot, his coach, raised more than a few eyebrows back in the 1950s’.

Elliot was a basketball innovator.

At halftime he implemented the usage of oxygen tanks for his players along with a bowl of soup to rejuvenate. He helped developed the multi-colored red, white and blue basketball, later used in the American Basketball Association.

For motivation, he took recorded cheers from the home crowd to boost the team’s spirit at away games.

Elliott offered game officials earplugs, so they wouldn’t be influenced by screaming crowds. Another light bulb struck with the No. 64, in the team to reach 64 points first gets a W in the win column.

It is also mentioned in folk lore, that he popularized the square on the backboard behind the rim to aid shooting accuracy.

“Any of my experiments are motivated by a sincere desire to keep basketball tops in spectator appeal,” said Elliot in an interview back in the 1950s’.

One experiment was for star center Barber to go on a scoring spree back in 1953.

But the numbers do not tell the entire story.

Here is the true story behind the 188-point performance against Chapman.

“One afternoon I was working out in the gym and our coach (Don Perkins) said he wanted five of us to help with an experiment,” recalled Jones. “Three of us were on the JV team and the other two were just boys who were in the gym at the time

“We walked across the street to L.A. State. Their coach, Sax Elliot, was there with officials and a bunch of photographers. He told us we were going to play State’s varsity. Elliot said it was an experiment but never explained it specifically. They had 12 men. We had five.

“They pressed us full court and Barber hung around the center. If they didn’t’ intercept the ball right away, they would let us dribble in for a layup. I was a guard I brought the ball down court.

“I was 5-9 and as big as anybody on our so-called team. I got 68 points. We played them man-to-man on defence. We never froze the ball. We were just having a good time. After a while we realized that they were trying to let Barber make all the points (he would finish 92-of-153 from the field, scoring his team’s first 156 points).

“I remember if one of their players didn’t get the ball right to Barber, Elliot took him out of the game. The man we had guarding Barber was James Laughrum. He was 5-8 and Barber was 6-6. We even collapsed on him, but it didn’t do any good.

“The scoreboard was never turned on, so we had no idea how the scoring was going.”

So what was the purpose of Elliot running up the score while focusing on Barber’s record output?

Elliott was unhappy because Bevo Francis, of Division II Rio Grande College in Ohio, was making national headlines in that a few weeks prior – January 9, 1953 – Francis had dropped 116 points in a 150-85 victory against Ashland College. He would finish the season with a 48.3 ppg average.

Francis would score 113 points the following year during a February 2, 1954 134-91 decision over Hillside College.

Elliott thought it was basketball blasphemy.

“We deliberately arranged a mismatch – which is what Rio Grande had been doing – to prove that if you want to set up the conditions, any big center on a fair team can score 100 or better. In normal intercollegiate competition, where two teams are relatively equal, it can’t be done.

“It proved to me that anyone who scores over 100 points is a phony. Given a mismatch, a four-man press and a big center, the center can score at will.”

An opponent stated that “Barber used a two hand jump shot and his elbow was on a plane with the hoop (when he jumped).”

Elliott continued: “But it’s not basketball. I think the game proved that Francis in Pacific Coast Conference opposition would be lucky to score seven or eight points.”

In the game against Los Angeles City College JV, Barber only scored 103 points despite, according to Elliott, “arrangements were made with the opposing coach not to defend Barber when he was shooting” and that the Diablos “had to pass the ball three times before shooting” thus eliminating the fast break.

Prior to Barber’s three-day exhibition game scoring spree, the Diablos sported a record of 9-10 against such teams as Brigham Young, Fresno State, Pepperdine, Santa Barbara State and San Diego State.

Barber was averaging 16.55 ppg for all of the games and 20.2 ppg in conference play. Play which had games at only 40 minutes regulation.

Because of Barber’s and Francis’ superman scoring efforts, the NCAA rules committee ratified a proposal by the National Basketball Coaches Association – “Anti-Bevo Legislation” – that only matches between varsity teams or four-year colleges would be recognized in the record books.

Barber, who lettered in basketball, football and track while at Los Angeles State, was selected Round 7, 50th overall pick by the Minneapolis Lakers in the 1956 NBA draft.

He would make it to the show as one of the games oldest rookies – 29 years young – for a cup of coffee in 1956-1957 appearing in five games for the St. Louis Hawks.

He later recalled that he quit because he “was tired of collecting splinters” while also dealing with the racism of fans and even teammates.

Two of his grandsons, Jason and Jeryl Sasser would both play in the NBA in the early 2000s’.

Francis would never play in the NBA but tour with the Boston Whirlwinds, traveling opponents of the Harlem Globetrotters. He died in 2015 at age 82.

In an interview with the Los Angeles Times years ago, Barber, who we believe is still alive at 94 but could not confirm, said of his 100 point games: “You can see why I don’t want to go around talking about it with my friends. Nobody wants to believe it, and I can understand that.”

What is the most points you have ever scored in a game?