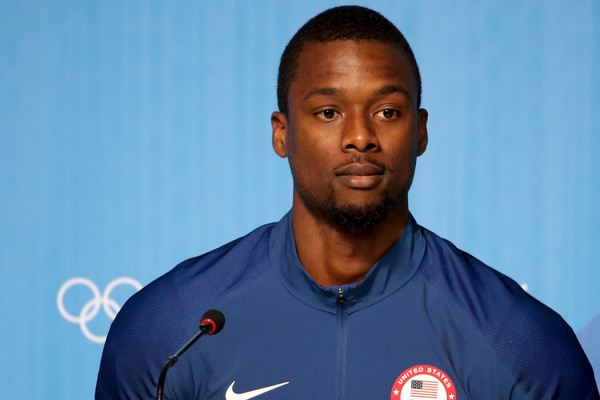 Bad News For Barnes This Olympics

Looks like the Golden State Warriors aren’t the only superteam not giving swingman Harrison Barnes anytime under the sun.

Now the new Dallas Mavericks player isn’t just watching this years biggest Free Agent, Kevin Durant go for O’Brien’s gold in California with former teammates Draymond Green and Klay Thompson, without him. He’s got a front row seat to it in Rio too.

Barnes has barely being getting any burn in Brazil. So much so that it’s hard to find a stock photo of the point player in Team USA uniform, unless it’s a warm up. There’s no shortages of tweets about the substitute on social media however. As Twitter trolls have taken him to task. Some calling him a “human victory cigar”, other memes portraying him as the man with the easiest job to get to gold…and the U.S. haven’t even taken to the podium yet.

But as America head into the Gold Medal Game finale against Serbia today maybe it’s time they used their silver lining. Because remember just like the women’s national basketball team that yesterday hit gold against Spain this is a dream squad, 1 through 12. Just because the Dubs club didn’t leave much room to afford Harrison doesn’t mean that Coach K’s country should follow suit, leaving him in the equivalent of a tie courtside. Cheerleading from the sidelines like Los Angeles Laker and Spain’s ageing star Jose Calderon in the semis. The clock on his signature speedometor ticking towards father time.

Don’t listen to the Twitter trolls, they know nothing but how to make themselves feel better, by putting someone else down. They’ll look for anyone they can make feel worthless, even if it is someone that has just inked a multiple year, multi-million dollar contract. Now how’s that for a tag!?

Harrison Barnes is still an incredibly talented, superstar calibre player at an elite level, who can fill it up from all over the floor just like the Toronto Raptor that is leaving his P.T. extinct, DeMar DeRozan.

Racking up three DNP-CD’s (with averages and point minutes that no one seems bothered to log…and who are we to add insult to injury like time on court?) instead of throwing up threes, this guy may as well take in the sights from downtown Rio de Janeiro. But look from the ocean and you can see that this brother can still make it splash…even if he’s no longer on that side of the Pacific.

Canning just garbage time in these Olympic Games. Barnes seems to be in the dog house like Matt. But he’ll get the bone again. Besides everyone-including us-was letting his former Warrior teammate Klay Thompson hear it for his own slump, until he shot all that down. This young 24 year old buck may just have his time and place off the pine tonight. And if not he could join Dirk in downtown Dallas and exact revenge with his sharp-shooting set of skills. As Barnes will become the Winter Soldier this November for the Mavs, killing everything in site.

Then everyone on Twitter will have nothing to say no matter how much character they think they have.

Regardless, even if no one sees him as a Warrior anymore this Maverick is still about to be in a golden state.