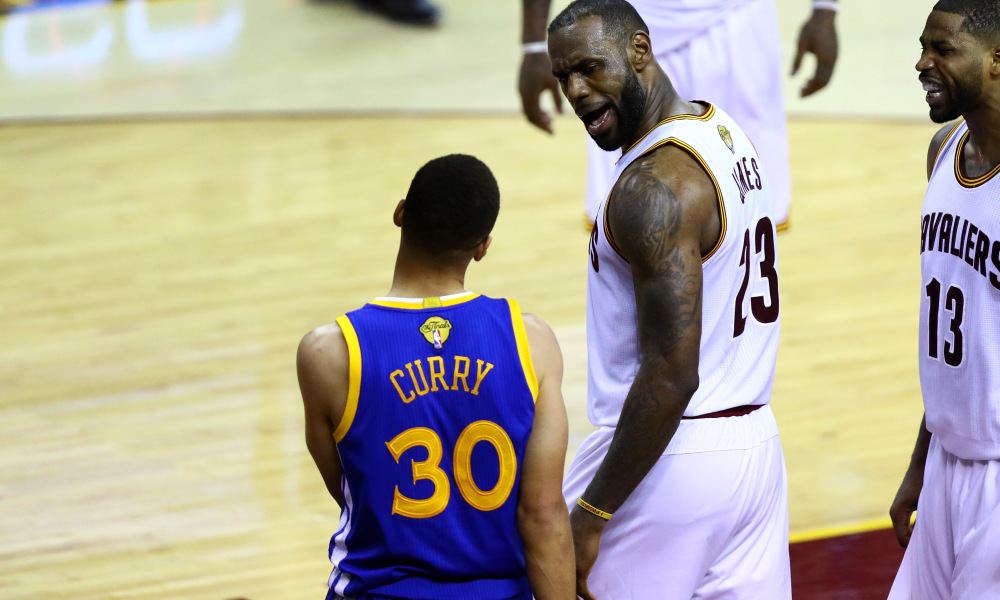 The ‘Threequel’. It’s here, lisp or not. Cavs/Warriors III. Ali/Frazier. The King and the masterchef. Even after LeBron James’ men and Curry’s kitchen faced the storied, legendary all-team franchices of the Boston Celtics and San Antonio Spurs in the Eastern and Western respective Conference Finals. Some predicted an upset. And old-school, blue collar Finals. But history being made repeated itself like the time that’s the charm. As King James made Isaiah Thomas walk the Green Mile and Kawhi Leonard’s Spurs in one big sweep was just par for the course for Golden State. The Dubs have a broom clean record. The Cavaliers have only dropped one game. They’ll both lose some here in what is likely to go the full seven and four quarters again. But after this series comes to a close who will be left crying this time? And for what reason? Neither team will three-peat, but the conclusion of this epic trilogy of ‘Godfather’, ‘Dark Knight’ and ‘Lord Of The Rings’ will leave one winner. Last years repeating Cleveland Cavaliers or the revenge of the Golden State Warriors? It’s time to break it down again.

Your smart dinner money should be on Chef Curry with the pot, but killa Kyrie Irving drew more than first blood in last years Finals and Uncle this head-to-head match-up could be closer than the alphas. Steph will dominate from downtown, but we all know Irving’s clutch and ability to put it away was the real reason the Cavs became champs last year. Despite the plaudits the King received on the block.

On his night J.R. can shoot with anyone…and boy do we mean anyone. Mr. Smith will have the Human Torch of little Splash Brother Klay Thompson to go up against each night though. A red hot shooter whose only off time seemed to be during the 2016 Rio Olympics in Brazil. And with last Summers thunderous addition of Durant taking focal point attention, the most unsung match-up could also be the most fun when both streak shooters are on.

The Warriors knew the only way they could take the Kings throne was by adding a knight to their roundtable who could pull sword from stone. And last Summers biggest free agent Kevin Durant was the right decision. Providing there is no identity issues in the leadership battle then Durant can perfectly match-up with LeBron in something scripted by the Basketball Gods. But King James bible of basketball is sermon serving us something historic. And his legend only gets better by the David and Goliath contests.

No love was shown to the “other” Kevin until he did all the Game 7 intangibles that make for a champion and Big Three certified piece. But for the Dubs Fantastic Four Draymond Green is the talk and the walk. He’s a beast. Yet each forward in this one-on-one will bring something the other can’t counter.

Bogut’s injury last finals put the Dubs step on the back foot last year and many in California claim that that’s why they weren’t crowned King. Zach Pachulia is a smooth free-flowing replacement that brings new, big life to G.S.W.’s death line-up. But without bias we think Canadian Tristan Thompson is poised and primed for a breakout. Unless the Kardashian curse breaks him.

The Warriors have so much on their front-line they don’t need much of a second unit. But the talents of ‘Bron-stopper Andre Igudola, David West, Matt Barnes and Shaun Livingston make sure this team can march on whoever is wounded in battle. But after the Cavs added former All-Stars like three-point cupid Kyle Korver and former L best P.G. backup Deron Williams to vets like championship certified James Jones and Richard Jefferson (and let’s not forget players like dunking Iman Shumpert and the return of Larry Sanders) you know whose coming out in splinters.

Must Read:
If NCAA Star Sam Dekker Plays His Cards Right He Could Favour A Stacked NBA Team

First year champions Coach Kerr and Coach Lue are both former playing days, Point Guard, clutch champs who played with the Mike and Kobe dynasties respectively. Steve Kerr may be more seasoned pro, but Lue isn’t afraid to tell King James to “shut the f### up”! Are you?

In the end the Cavs will defend the land they claimed, no matter how much Dub Nation stands up. Cleveland wine will see championship gold again.

Prediction: Cavs in 7…and 1 Overtime.