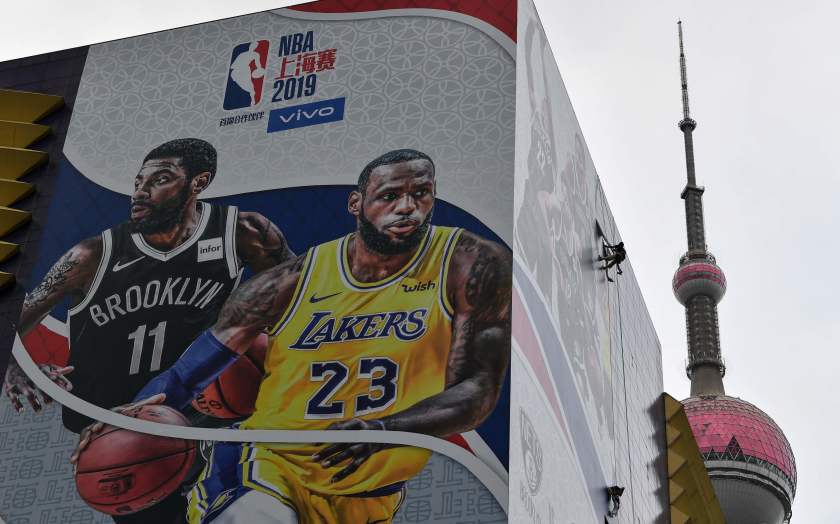 Big Trouble For Lakers Against Nets In China

Making ’em move and shake like the guitar he strums, former Laker meme team reserve Lance Stephenson is making his name and game proud in China. Lifting trophies just weeks after taking off for the Far East. But as for his former team, they had nothing to dance about when they left China after their Shanghai/Shenzhen double-header with the Brooklyn Nets.

There was no Kevin Durant. In the end with a facial fracture no Kyrie Irving and no Anthony Davis for most of Game 2 with a sore thumb. It sucked. But there was almost no game for all the King’s men and the Brooklyn boys as China went dark on the NBA following the events of last week.

Billboards of LeBron and co came down like witnessing the first time he left Cleveland for the talents of South Beach following some comments from the Rockets G.M., James Harden and Russell Westbrook in support of the Hong Kong protesters. And they weren’t even in China. Playing big in Japan with the champion Toronto Raptors. Splitting their two game series in Tokyo a year before the 2020 Olympics, one game apiece. Commissioner Adam Silver back them up saying they, the protestors and everyone has a “right to free speech”…and then everything came down.

First China cut ties with the NBA like your exes friends on Facebook. Then all posters, media and the like were removed like any chance of these games being televised. It looked like they wouldn’t even tip off as the Lakers and Net teams were stuck in their hotel rooms wondering if they could even go outside to Instagram those iconic skyline sights. The Lakers-getting there first-didn’t even have WIFi to check what was going on or scroll through their Twitter timelines and take on the trolls. But in the end from Shanghai to Shenzhen there was LeBron bringing back the iconic chalk-toss pregame like he has the headband Heat days.

But if the King thought that was the end of his troubles in China then he was thumb sorely mistaken as the Nets bucketed the Lakers on the four frames of both trips. And if you want to talk about trolling Brooklyn also had the best bite back GIF reply to the Lakers “consider this a warning” tweet last week after beating the Golden State Warriors in San Francisco for their preseason opener.

Spencer Dinwiddie’s expression said it all.

Must Read:
Australia too much for Canada in 2019 FIBA World Cup opener

Despite dropping two like Alka Seltzer tablets the Lake’s put on a show as ‘Bron bulldozed the lane like John Deere and the Ghidora three-headed big-man monster of the Lakers showed they could even take on Godzilla if they were ever to cross the continent to the city of Tokyo. A.D. again coming up big before injuries got in his way, even from downtown Shanghai on that night, showed how much he’s been working on his three-ball. But wolf McGee huffing, puffing and blowing the Nets painted post house down (before swatting the ball away from him like it was the hand of a significant other that had just pissed him off) and Howard finishing off alley-oops with that old Orlando magic (mosquito swatting all other shots. Looking more and more like a solid pick-up to round out the bolstered bench on his reunion redemption move as he blocks out any doubt) turned the lay-up line into a dunk contest. With both former participants liking it from their alternate takes on the bench and vice versa. Getting up and off it like it was their time to play.

McGee is one of this writers fan favourite Laker players…of any era. But if you bleed purple and gold you have to love the Bruce Bowen like Avery Bradley right now and all he’s doing for the team not only the defence end he dominates like the people’s court, but the shots he selects and creates for himself on the business end. From reigning champ Danny Green, to little Greek brother Kostas Antetokounmpo who also showed out (making it another NBA family affair for the Lakers after signing legendary Point Guard John Stockton’s son David from South Bay. A year after picking up Gary Payton II), A.B. in the offseason of A.D. may be one of LeBron’s Lakers best pick-ups. Especially in this pick-up game like preseason exhibition. Hopes for this purple season are higher than Meth and Red right now.

But in the end in China it was nothing but the Nets.

Spreading love the BKLYN way with some crazy, rich wins, the Nets tore down the Lakers 114-111 in Shanghai, thanks to a former Laker of all people. As former (former) D-League to big league sensation David Nwaba iced the game off the turnover with a huge, signature slam with 13.9 to go before KCP (he’s still here… that’s how abyss deep the Lakers are this year) couldn’t convert a clutch three. This after both Irving and Caris LaVert went down (the latter joining Kyrie’s facial fractures with being poked in the eye). Spencer ‘The GIF’ Dinwiddie with 20 et al picked up the slack however to show the Nets are just as deep. Especially upfront, even rivalling the Lakers big, big-three as Jarrett Allen and new free agent pick-up DeAndre Jordan combined for seven big blocks.

Must Read:
Pelicans Nickeil Alexander-Walker Career-High 37 points against the Clippers

Not treading shallow water either the following game on the H.K. border of Shenzhen closed it all out for an eventful and stressful half week. With many fans wearing hearts on their jerseys and other on their sleeves as the former New Jersey Nets took on the former Minneapolis Lakers in the second Chinese city. LeVert returned and scored 22 in that many minutes of play to lead his team to a 3-zip postseason record ensuring the Lakers would get no sleep on their return flight ’till Los Angeles. And this was without Kevin Durant or Kyrie Irving. Even the locked down dreads of rookie Nicolas Claxton got in on the action with 8 points in nine minutes. If the Nets can beat the Lakers now just imagine what it will be like when their one, two punch hits. It looks like they have a dynamic duo to best not only ‘Bron and the ‘Brow, but the Shaq and Kobe greatest of all time too.

But if you thought that was how you send a message then just look at the Chinese fans who came to the game in their teams jerseys, but with a Chinese flag covering the Jerry West silhouette of the NBA logo.

Now that’s how you make a statement. Although let’s make one ourselves and continue to stand with the people of Hong Kong, but also look for peace and resolution in this critical time. Support the Lakers and Nets all you want but this was just a game…and a mere exhibition one at that. The support Hong Kong needs right now is so much more.