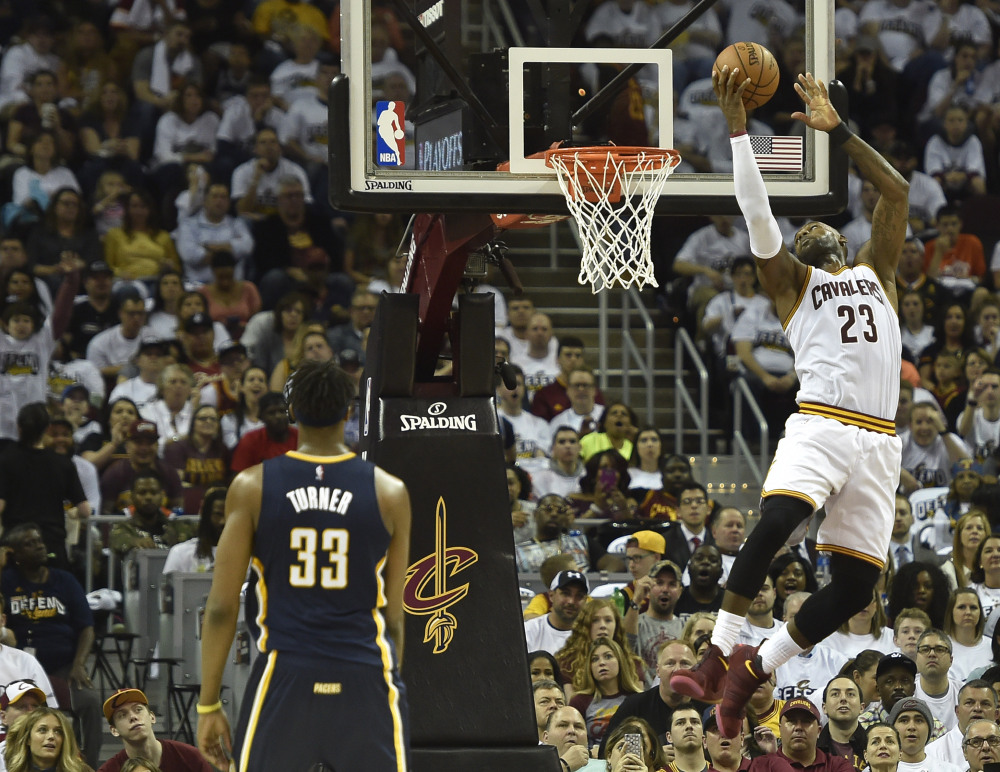 In The Land last night all the Kings horses and all the Kings men didn’t exactly blow Lance Stephenson’s house down…but they did whistle back in his ear.

King LeBron James and his reigning Cleveland Cavalier champions survived the Indiana Pacers in the opening Game 1 of the first round of the 2017 NBA Playoffs this weekend.

What was billed as the Hoosier states Paul George and Jeff Teague duo versus versatile forward and Point Guard combo LeBron James and Kyrie Irving (we still need to talk about Kevin…where’s the Love?) came down to a C.J. Miles clutch shot that was mere inches away, careening off the rim as it didn’t beat the buzzer.

After all the ‘Bron brunt dunks and P.G. being all over the court like a quarterback, a would be dagger from one of the leagues best points Teague gave the Pacers their first lead of the game late in the fourth. But before the clock hit a Westbrook zero the triple-double King and his cavalry outlasted the Pacers pace and pasting.

The Cleveland Cavs just took Game 1 by one, 109-108 behind a monster 32 points, 13 rebounds and 6 assists from King James who was firmly focussed. Posting some pregame amazing artwork (that almost matched TNT’s explosive hip-hop album NBA Playoff covers that take inspiration from those Marvel comic crossovers) lionizing his strive for greatness with the caption “‘Zero Dark Thirty-23’ activated” on Twitter. But as the King chastised Pacers nation like Chastain, Indiana still had a basketball Jones behind George’s great 29 points and the epic, emotional reunion return of their former star Stephenson, and one.

But the seventh seed couldn’t seal the win in number 23’s 200th career playoff game (only the 9th player in league history to record such a feat…as royalty always makes history). As the 32 year old and his fellow big-three defended the Quicken Loans Arena land. Irving ingrained 23 points and 6 assits himself, whilst the second part of the Special K, Love romanced 17. In the end Indy may have the picket fence like Hickory, but they didn’t run any defence as the King and his lands castle walls remained guarded.

Elsewhere in the first day of the playoffs, Canada’s Raptors where wrapped up 97-83 in Toronto by the Milwaukee Bucks. They may be the north, but Giannis Antetokounmpo is the deer we all should fear. Whilst out West the Gasol brothers met in arms for the grit versus grind of the Spurs/Grizzlies series, which opened with a 111-82 win for San Antonio over Memphis. And the Jazz outlasted the L.A. Clippers, 97-95 despite losing their own Eiffel Tower Rudy Gobert, stifled by a knee injury.

But it all started with the throne.