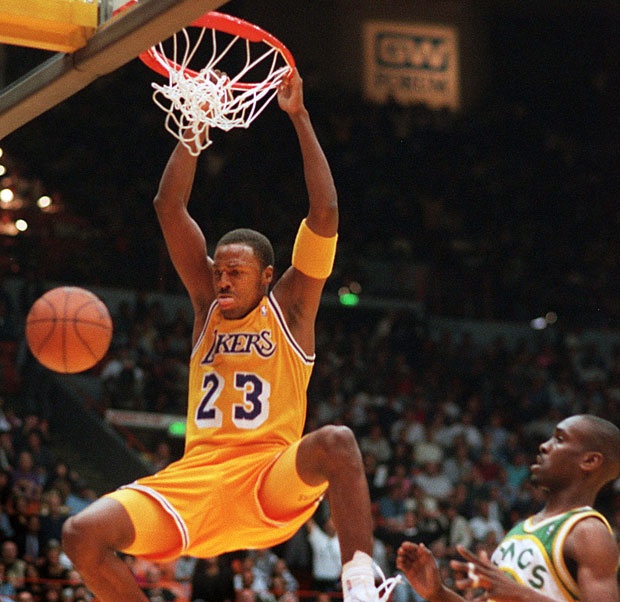 (This article was meant to serve as an interview with Cedric Ceballos, but following his recent ill-health we post this to tribute and wish him the best. get well soon champ.)

Open your eyes to someone who really sees the game for what it is.

All eyes are open and on the one man with his eyes closed. A man holding court on his own, decked out in purple on the decked out hardwood. Players and fans alike are pointing and whispering something like; ‘he can’t do it’! Before more doubt is shed the man starts running like he’s heard the starters gun for the 100 metres, cradling the peach awkwardly and carefully like it was a full bucket of water. It all looks a little too awkward or party pinyata like until the man begins to soar.

Part M.J/Dr. J, part American eagle outfitted in a black bandanna. What seems like a thousand camera flashbulbs pop, while the same number of mouths drop. SLAM DUNK! The man lands back down to earth with a chorus of champion cheers, while pulling the blindfold off his eyes. All Cedric Ceballos sees behind a sea of white teeth is nothing but tens.

Cedric Ceballos was a Slam Dunk winner for that legendary dunk, but this former star player of the NBA was much more than that. Can you count to 50? Ced can too, but with buckets. Hitting them high with more than his space jams, joining the half-Wilt, half-century and over club before he hit his 30’s. He was part of the elite class of the 90’s, arguably the greatest decade of NBA history.

An academy of diversely talented players who would have been kings in another time, but like princes they were overshadowed by Michael.Ced could dunk like Mike, score like his fellow number 23 in some games and before his mid-nighties Lakers gave way to the next one in Kobe Bryant he was a potent scorer for the Los Angeles Lakers. He would have made for a great, much-needed then third shooting option behind Shaq and said Jordan mark two. His wonderful, aerially amazing wing game developed with the association’s change towards that style of play.

With a ‘tache and high-top fade this prototype basketball player defined the nighties and the changing of the guard…literally. Playing like a 2 at the small forward position, opening up the game like he did the court. L.A., Phoenix, Detroit, Dallas and Miami were all shown that this man from Hawaii was more than a journeyman. Hapoel Tel Aviv, BC Lokomotiv Mineralnye Vody, San Miguel Beermen and the ABA also benefited from all the talent of this all star.

Ceballos saw it all and did it all and made a damn good career out of it.Still they took a man who once hit 50 like his name was Ghostface, two positions lower in the draft. Well like most late picks he made other teams realize they shouldn’t have passed him up…early. Waking fans up with his dunks, leaving opponents sleeping on defense. Still Ceballos was more than just the wow factor of dunks and microwave plays (much love to Vinne Johnson), he had much more cooking.

Take off the blindfold and plug into youtube to spark off nostalgia and you can see that Ceballos could score like a pro. Leading the league in Field Goal Percentage in 92/93 with 57.6%. This Sun burnt brighter than his doubters, with a vibrancy that matched the jersey’s he rocked in Arizona and California.

In Los Angeles he even led all Lakers during the 1994/95 season with an average of 21.7 per, he really was an option. A year later, the second round was again on him as he led the Lakers with 21.2 per, including that career high game, which was the first time a Laker had hit 50 in 20 years. That was before James Worthy and that was before Kareem.

That’s truly magic, when you realize these legends had their offense served to them on a plate by the tricks of Earvin Johnson’s trade. When he was hot, Cedric cooled teams off and put games in refrigerators faster than Chick could call it. Not only did he take Hearn’s ‘slam-dunk’ phrase and own it, he gave his own name definition as well.

Must Read:
Drake vs Blake

Today Cedric is ever the entertainer, still bringing a smile to peoples faces almost bigger than his. The Phoenix Suns passed the mic back to this player/rapper as he became the teams in-arena emcee in 2004, whilst also making the rounds on city radio and on the internet via his webcast, ‘Nothin’ but Net’. Of course a man who once released a hit single with West-Coast rap legend Warren G.

(‘Flow On’) to go along with an album (‘ B-Ball’s Best Kept Secret’) was a natural at moving the crowd even when he wasn’t regulating opponents. Following some assistant jobs Cedric this year has been playing with the ‘USA Legends’. Forget the ‘World All-Star Classic’ this former player is making dates and moves like a Globetrotter.

From the scoring to the showboating this man charms the crowd with his infectious character and irresistible charisma. Ceballos put in an MVP performance this June as his legends beat the Malaysian NBL All Star, despite Ced’ lending his talents along with a Malaysian jersey to play for the opponents for a few minutes.

That’s Cedric for your willing to play with anybody, or do anything just to entertain you. This guy is all-time, dedicated to the game and putting a smile on peoples faces in the name of fun. Seriously speaking though, Cedric still played like a pro, but one that wasn’t afraid to let his love for the game and his moment show.

After all isn’t that what sport is all about? Anyone who disagrees can put the blindfold back on. In his NBA career Ceballos opened eyes and made those who loved the game look at Basketball his way, the entertaining way. He still does that today. Can you see?

In this article:Cedric Ceballos, Lakers