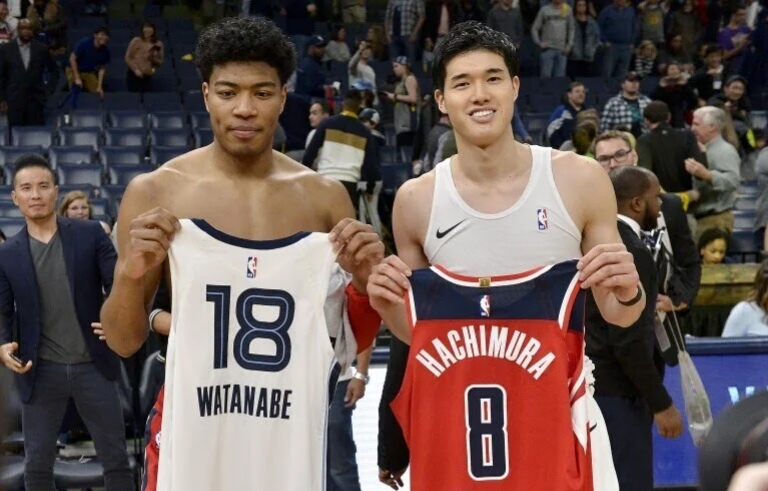 Swapping jerseys post-game like a ‘One Last Dance’, Dwyane Wade retirement tradition. Read all about it in this land of the rising sun morning on the same front broadsheet page of The Japan Times in this Kobe hotel that headline tells us the ‘National Stadium Is Ready For The Olympics’ in Tokyo 2020.

Last night Japanese-born Basketball players Rui Hachimura and Yuta Watanabe met and made NBA history for the very first time, in something so news and noteworthy that it wasn’t just big in Japan.

Rookie Rui may have only had a Ron Measley 10 points for the losing Washington Wizards and sophomore Yuta a missed bucket, yet three rebounds for the Memphis Grizzlies thank you very much.

But this contest was so much more than a box score. Even when the Hustle of the G-League affiliate Watanabe checked in and forced Hachimura into an air all as the two players faced off for the first time on their way to 128-111 Memphis rocking win over the Wiz.

“We haven’t lost like that in a long time”, The Japan Times reported Washington leader Bradley Beal as telling the press postgame.

But for Japan and the watching world that’s rotating more around the Spalding, this global game was all about numbers 8 and 18 as Basketball borders got smaller, breaking down barriers and walls.

Hachimura (who is one of the top ten best rookies this year and is doing for the Washington Wizards in Japan what Yao Ming did for the Houston Rockets in China (did you see Tracy McGrady’s recent reception? And this is with the current state of the NBA over there following LeBron and James Harden’s (also a Rocket) misinformed comments)) and Watanabe (who already has wrote an autobiography in Japan with ‘Liking Yields Power’ which I can Google Translate tell you even in Kanji (speaking of which how about some team City Edition jerseys in Japanese script for a real solidarity statement?

Must Read:
Yao Ming and Death of a dynasty?

The Wizards have already created an official Japanese Twitter for character) has a beautiful message that isn’t lost in translation like Bill Murray and Scarlett Johansson) made storied league and land history by becoming the first Japanese players to share the court together as they Cage and Travolta faced off as opponents.

“It felt extremely weird” Rui told press of his brief exposure with Yuta. The two national teammates and friends were only on court together for a minute (the wonderful Watanabe deserves more hardwood time and less on the pine…maybe on their next matchup which will be seen for more than dollars and yen), but it meant so much more for a nation of millions no longer being held back when it comes to hoops.

Yuta Watanabe made history last year in Tennessee and helped pace the way for Rui Hachimura who is having a monumental moment in the U.S. capital D.C. Helping lead a neon bright charge for more rising sons from Japan on the calender eve of the year were they are going to own the sportsworld like they didn’t just hold the Rugby World Cup this Summer.

Rui and Yuta next meet in the nation’s capital for a rematch in D.C. that will surely put them and their nation even more on the map this season. All before the summer they truly takeover as teammates in Tokyo. Leading the way and carrying the torch for Japan’s basketball future in the 2020 Olympics.

And you’re going to want a piece of those historic jerseys.