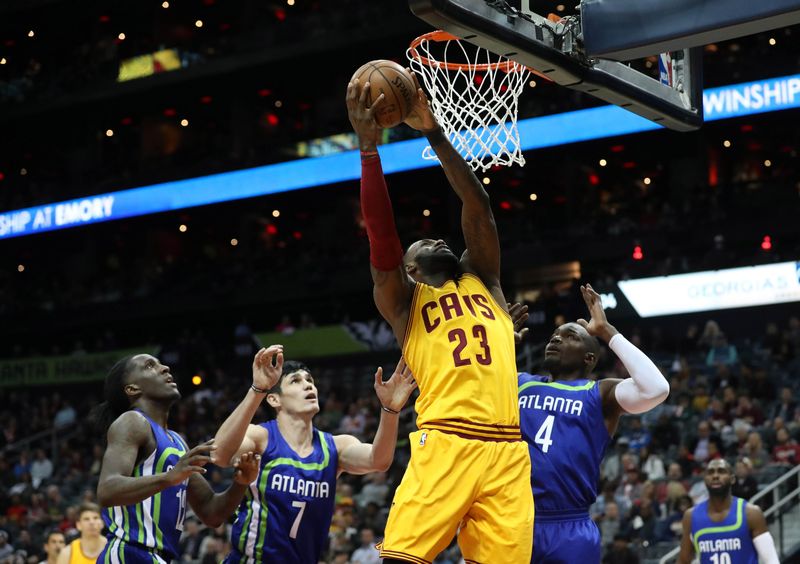 Anything for a picture of LeBron right? Even if this is a Hawks article. No! Even if this is a great shot of a great jam. Even if the Cavs actually beat the ATL in this Eastern Conference powerhouse clash thriller 135-130. It’s not about that. Look where all those in shot are looking. The rim?! No! No that. Higher than that. To the ceilings like that confused Michael Jordan quote that’s making the internet rounds of ridicule and may even replace those sad memes. The G.O.A.T, John Wick or Batman. We’re not talking about the roof. We’re talking about the rafters. And look what all those surrounding Atlanta players are wearing…excuse me rocking. Lead by this years New Orleans All Star Paul Millsap at the four. Those toothpaste, blue, green and white tube striped aqua joints. You know who that’s for?

It’s their 15 man salute to the Pistol. The one and only Pete Maravich.

You didn’t think Pistol Pete was just the nickname of one of your buddies did you? You too Jobin?! Pistol Pete is the name that belongs to one man and one man only. Just like the phrase Slam Dunk will always be coined and owned by legendary Lakers announcer Chick Hearn. The floppy haired maverick Mavarich did things with the basketball that even the man who put games in refridgerators couldn’t even put into words…no matter how much his was worth. This White Chocolate before Jason Williams hit everyone with the behind the back pass and always met his mark. With a face that belonged in the prom high school diaries, most likely to succeed with Hollywood locks just waiting on a casting call from a stylist, but a game that could rule both the streets playgrounds and the clowns and hardwood circus of the same ABA his striped jerseys belonged in. This boy who schooled everyone graduated to the big leagues and now in his ceremony he is raised to the rafters. As his green and blue number 44 as symbolic to this Georgia state as Jerry West to this whole United States National Basketball Association of America took it’s pride of place years after the Jazz took note in Utah’s Salt Lake with his number 7 to hoop heaven. Surrounded by all the red and white legends of Dominique and Dikembe legend. Showing you just how much the Pistol started before all the other Hawks that flew. And what ended as one of the associations 50 greatest players and as legend has it the most creative offensive force the NBA has seen. Or as the man who caught it Havlicek puts it, “the best ballhandler in history”. Or one that anyone has ever seen…or not as the case may be. As the ball was flicked behind and before your eyes like true tophat Magic before Earv.

But if only he could have seen it.

As Pete Maravich, the man who could put the ball behind his head, through all your teams legs, right behind everyone’s backs collapsed and died tragically on the same court he used to own and make his own in turn every single time he took the ball and ran the floor. Heart failure. Tragically at the tender age of just 40, back in 1988. Eight years after he finished his storied career with the legendary 80’s Bird Boston Celtics like another trailblazer Bill Walton. One thing that never failed that day on his court was his legacy that still loves to this day. And never will fail like one of his clean, crisp passes slicing the defence to his cutting offensive teammate. And this heritage night this weekend gone belonged to the late, great Pete as everyone who took their seats in the A rocked their free Pistol tees from row A to the visiting fans nosebleeds. Even if former Hawk Kyle Korver (another Atlanta great who knows how to make the peach soar towards the basket) coming back with Cleveland, had a Cavalier night rewriting NBA history. His tradmark three-pointer with just over a minute to go helped The Land break the regular season record for made shots from downtown with 25, some behind Kyrie (43) and the King (38) who combined for a Kobe-best 81 as the Cavs sunk their talons in the Hawks, clipping their wings.

But none spread theirs as much as Pete. Basketball’s angel watching down from hoop heaven, our gift from the basketball Gods. As the Hawks at halftime honoured the great Pistol Pete Maravich with a stunning, nostalgic neon light, video tribute on court that changed the red rebrand floor to those old aqua colorways as a sea of rich Mavarich memories washed over the ATL faithful.

This shots for you Peter.