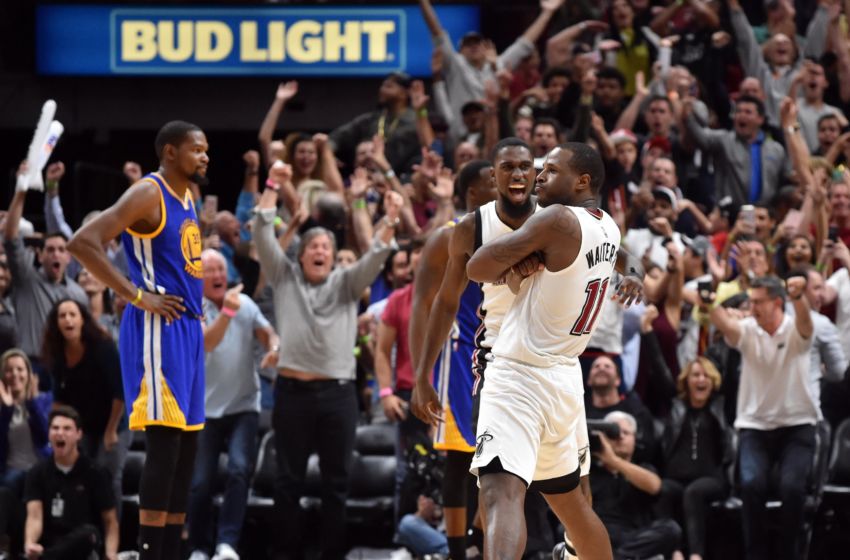 Now that’s what I call service.

Last night the Golden State of California and the talents of their big free agent decision maker Kevin Durant may have been shining in South Beach. But just like the fall of the King, the Heat knew how to cool all of that off.

Even in the post ‘way of Wade’ era Miami are still hot and it was a former Thunder teammate of old Oklahoma City franchise face Durant who struck down number 35 and his defeated Warriors.

Dion Waiters served up a Kareem 33 points and a clutch 3 to put the game and his winner in the bank. With the contest on the line Waiters delivered the final peach basket that put this 105-102 final outcome in the type of refridgerators that Chick Hearn used to jiggle about.

“F###### sucked”, Kevin Durant (who had a team high 27) told press when asked to describe what it was like to have his former teammate beat him at the buzzer. He was all tongue in cheek as he continued to joke that “it had to be Dion Waiters” who hit that game-winning, heartbreaking shot over him. Really he was “proud” of his “brother” and had nothing but praise for his former running mate who he used to “go at it with” all-time.

Dion whose final line sounded as good as the singer of the same name who used to work with Talib Kweli and Hi-Tek finally had the superstar moment that was promised with his fourth selection in the ’15 draft. On reflection the kid who started his career with King James in Cleveland as a Cavalier had his own champion crowning moment last night in LeBron’s old homeland. Screaming “This Is My City” to the American Airlines faithful in proclimation as he folded his arms in cocksure celebration. Emancipation from the rookie and sophomore salad days for the third year pro. As he tied his career-high for the second straight game he underlined it like no other game in his playing days with a Reggie Miller-time three.

Going downtown against a team that’s all about threes, Miami don’t beat almost championship certified teams like these Dubs. Especially without number 3 Dwyane Wade now back home in Chicago. But in their special military fatigues the Florida team put down the Warriors with the orange.

It didn’t matter about Steph Curry’s 21 points, 10 rebounds and 8 assists. Nor Klay’s 22. Not even Draymond’s dogged defence. And who needs old teammates? Not when all the khaki number 11 needed was 0.6 seconds to wait for his moment against Golden State in the South Beach sun.