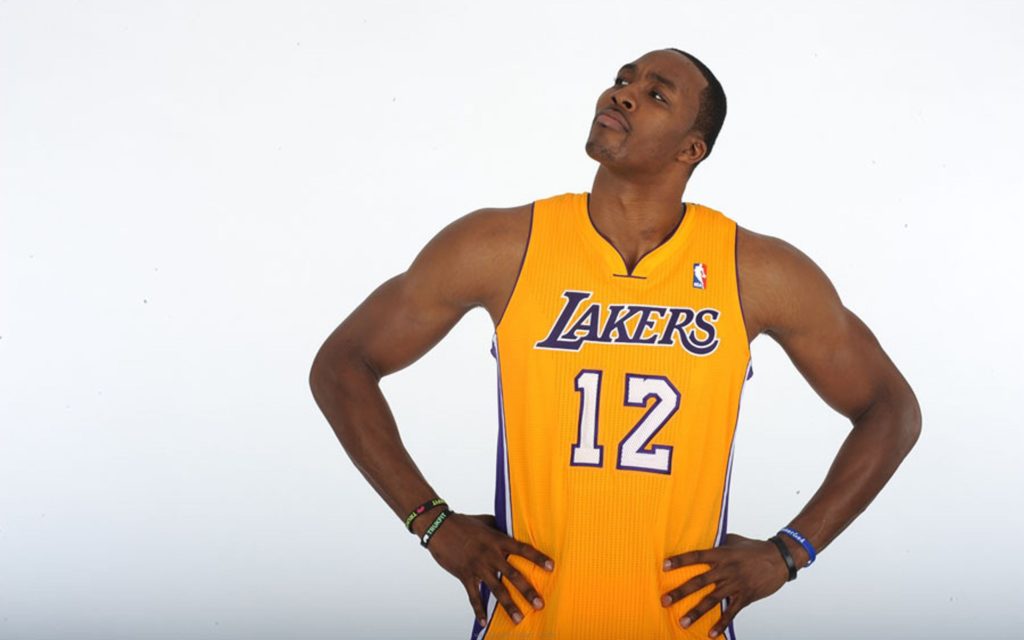 Is Howard's End In Hollywood

Should have bought that Dwight Howard number 12 Lakers jersey I saw in TJ Maxx for half off back in the day. Seriously though if Dwight can return to the Lake Show then there’s hope for my hairline yet…

Kobe Bryant mouths this whilst shaking his head in dissing dismay from the baseline whilst staring down Dwight Howard on the other half of the court. Now a Houston Rocket the less than perfect pair have a problem…and it’s all getting flagrant.

Once upon a time in Hollywood with Mike D’Antoni running the show with an ageing Steve Nash, Hollywood’s Laker reality show was playing fantasy, legendary name Basketball again like the time they brought in late in their career legends like Karl Malone and Gary Payton to help raise banners like the point of Kareem Abdul-Jabbar or logo of Jerry West. But when they picked up Magic man Dwight Howard who even took Orlando’s Mickey Mouse kingdom on his broad back all the way to the Finals against the Lakers, they expected D12 and KB24 to be the new generation Shaq and Kobe. After all Dwight Howard was a man of steel too.

And oh how they were Shaq and Kobe 2…but in completely all the wrong way. It turned out to be Batman vs Superman without the dawn of a justice league, or even their mothers having the same name. Kobe’s beef with Dwight made his repaired relationship with Shaq look like Japanese cows without the massage and feeding rituals that make their Mamba city namesakes cuts the best in the business…now served in Shaquille’s restaurant with more onion rings. And when they met the following season after the death of another dynasty to be, this time Dwight was the little red corvette and Kobe the brick wall unable to be felled or floored like the one in Berlin. Baptizing him like that time in Orlando with his most dynamic dunk.

Since going from the Orlando Magic to Magic smiles in Hollywood Howard has switched more teams than your 2K partner when you’ve already picked to play as the Lakers. He’s also received his fair share of off court and locker room problems including some chemistry cancer concerns. And even in this off-season, either looking to make some headlines or free agent publicity stunts he’s come out and said he’d be open to returning to the Lakers (…erm) and that Kobe was right (he already knows).

Now most in Lakerland laughed at the social media scoffed idea. Especially with a front-court force more formidable than anything the association has to offer, lead by new big man legend Anthony Davis. Following in the sneaker steps of Mikan, Wilt, Kareem, Shaq and Pau to truly be the new Shaq and Kobe with King LeBron James. But when his old New Orleans Pelicans reunited Wildcat brother DeMarcus Cousins went down with another season threatening injury last week the Lakers were forced to look elsewhere already, like filling out their final roster spot with Andre Igudola was a ring of last week’s past, or Carmelo was one long rumored Anthony never meant to be. Bursting the banana boat like a CP3 nix.

And although the Lakers have been linked with the arc of Joakim Noah or the Zaza land of Pachulia and with plenty of other big assets still on the market like Marcin Gortat or Amir Johnson, will we see Dwight Howard eating tacos and yelling with LeBron on Twitter this Tuesday as we all unfollow like too many tweets (my bad)? Bringing Howard back to Hollywood seems sillier than bringing the LaVar Ball show back to this Kardashian town. Because besides they already have the all dunking and blocking JaVale McGee who is worthy of a start with James (42) clapping like throwing up chalk. All as this hair blown out center throws it down again and again, coast to coast in California. But apparently there’s a mutual interest…what is this Tinder? Will this just be the makings of another Michael Beasley or make ’em dance Lance Stephenson meme team? Still the Lakers need more in reserve and Dwight needs this for his revenge to the past years that have taken his career from the red caped sun to being newspaper fodder to each cities equivalent of the Daily Planet. Time to rewrite all those who wrote you off Jimmy Olsen.

Read all about it, at the end of press next week Dwight Howard could be a Los Angeles Laker yet again.

Who would of thought it?

But it’s the King’s town now.

And after all in this LeBron ‘Space Jam’ scripted season for the Los Angeles Lakers you know Hollywood loves a redemption story too.