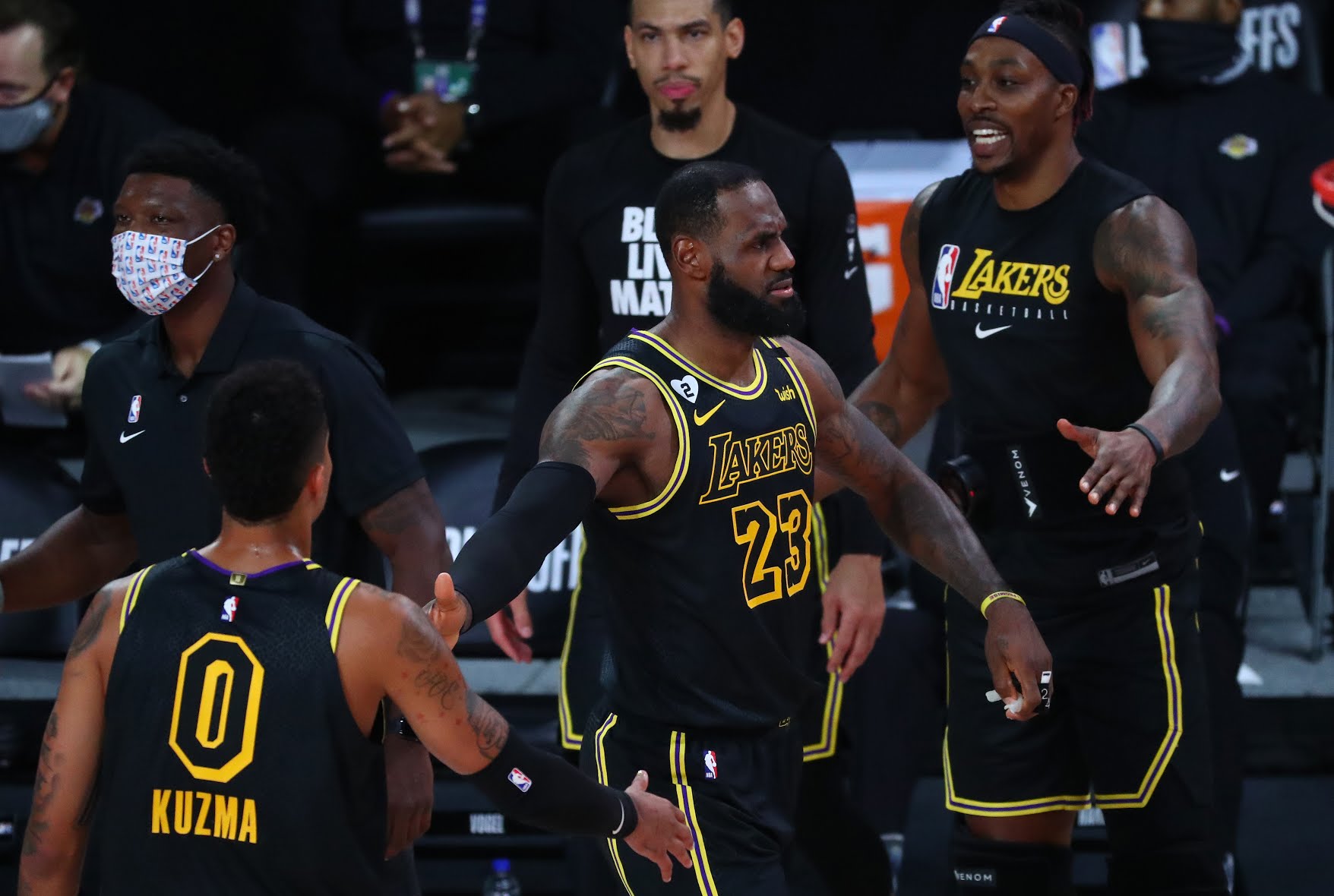 Slithering towards father time, LeBron James snaked his way through the blazing defence with his signature spin move that is as unstoppable as Kareem’s hook. This time looked different, however, for the crown of the Lakers gold, and we aren’t talking about the grey in his quarantined beard.

Back to black, King James drove the lane like an Escalade and drank from the cup in snakeskin. As number 23 and the rest of James’ Laker gang paid tribute to number 24 after his 42nd birthday. Taking it back to the Lore Series Black Mamba jerseys designed by the mentality of the man who wrote a letter to ‘Dear Basketball’ and found an Oscar for his Hollywood home in reply.

All fittingly on the wonder of the 24th of August (the eighth month of the year) as the Lakers led Portland 24-8 to begin Game 4 of the first round of the NBA Playoffs in Disney World’s Florida Bubble.

Like Anthony Davis said earlier this year with similar spiritual statistical similarities, he was with us tonight.

In the same game J.R. Smith tied Bean Bryant for the most three-pointers made in the Playoffs as he looked up to the heaven in thanks. With “What Would Kobe Do” written on his left sneaker, “SHOOT” on the right.

Milestone matching. LeBron also became the first Lakers player with more than 30 points and 10 rebounds in a game since … the one and only Kobe Bryant. His storybook career now turning a page towards Hollywood, like it did for his South Beach decision or homecoming in The Land.

The Lakers runway fit in Florida was like the black album as the players from Kuzma to Quinn Cook came in appropriate Black Mamba attire. All before the Lakers faded the Blazers to that very colour to take a 3-1 series lead on the ropes.

Must Read:
Wrapping Up The NBA Bubble Season

With a number 2 for Mambacita, GiGi above their purple hearts, the Lakers hit a gold standard with their platinum side. Blowing out the Blazers 135-115 after starting-off on a 10-0 run and leading by as much as 30 and even 80-51 at the half. The biggest since the Showtime of ’87. Just one digit or free throw bucket away from another iconic Kobe number that should be raised to the rafters like 24, or Diana Taurasi going off in the late, great 8.

James in a playoff mode P couldn’t touch (as funny as the best thing “Championship Chuck” has said since, “Lonzo Ball averaged a triple single”) was all nose breathing emoji whilst AD was just AD again (18, 5, 2 and fearfully some back spasms) as the new Lakers dynamic duo showed out and that they are as much Shaq and Kobe as they are Magic and Kareem, or Wilt and West in Los Angeles’ legendary lineage.

The Lakers blew the Blazers’ house down. Making the entire fourth quarter garbage time in this new game as the two teams traded rolled up tube socks and paper balls into the wastebaskets and Dwight Howard flushed Rip City away with his trademark dunks. Even getting into it with ‘Melo like LeBron wishes his Lakers did for this banana boat reunion that’s turning out to make for a great year 17 match-up, head-to-head.

If that wasn’t bad enough, Damian Lillard left before time, like his hurt hand with a knee injury that’s going to need another MRI to determine whether he’ll be back for the do-or-die Game 5 we still won’t bet against him for.

I wouldn’t bet against the King either, who next to Kuzma’s five threes had four and one from the heavens as his 30 led the way with a two-finger kiss that touched the sky for “Mamba out.”

From the King to Kobe, for all the tributes paid, I can’t think of one that honours the competitive legend more than getting better forever in his scaled threads that they should carry on wearing until the ‘chip is brushed off their shoulder with the dirt.

One that, like the social statements named on the back of the jersey, will continue to show that Black Lives Matter. From George Floyd to Jacob Blake, who survived being shot in the back multiple times by police when trying to get back into his car. The reaction of his loved one the same as the whole nation held back by those who are supposed to protect and serve.

Or as the King says, “It’s what we’ve been talking about. And it’s what we’re gonna continue to talk about. Having two boys of my own, and me being an African American in America, and to see what continues to happen with the policy brutality towards my kind, continue to see what goes on with the injustice — it’s very troubling. It’s very troubling.”