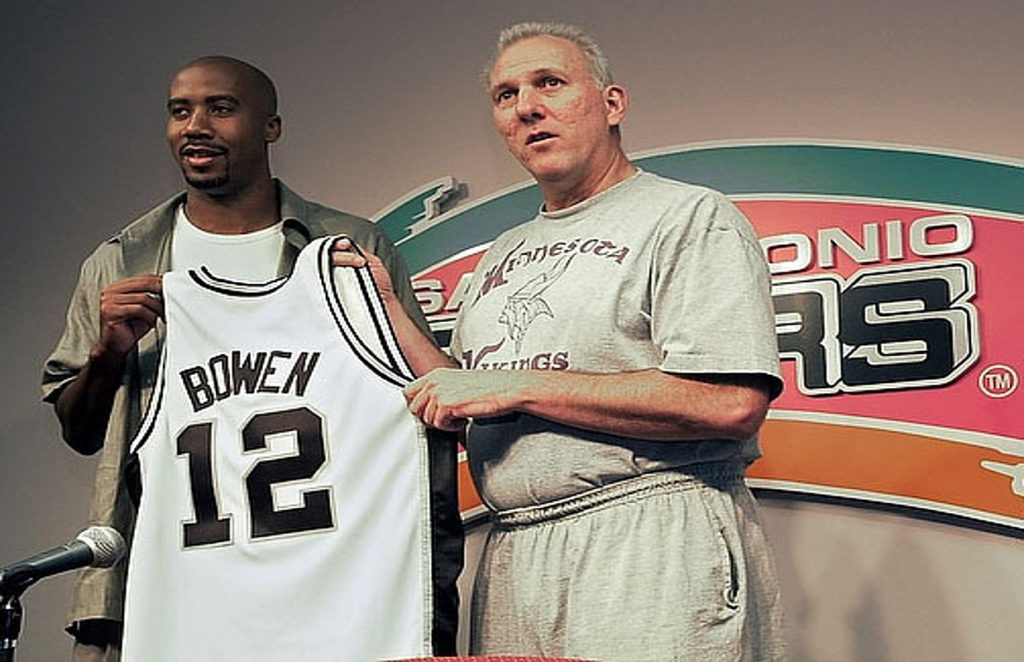 12 years ago, one of the best defensive players of all-time Bruce Bowen helped prevent every other team from beating his champion San Antonio Spurs in 2003.

In 2005 and 2007 more of the same lead Bowen to win half, a half a dozen championships with his Spurs. His classic contributions on the other end of the floor led him to be a franchise legend in San Antonio and three years ago the Spurs commended the three time champ by raising his number to the retired rafters alongside the banners he helped put up there.

Bruce Bowen was Bruce Banner on D, becoming the Incredible Hulk of defensive players. Don’t let his wiry frame fuel you. This guy was a Kobe stopper, no Ruben Patterson. In fact Bowen halted all scorers from the basket. Even the lord of the rings Kobe, amongst others had Bruce stating to him that when it came to the paint; “you shall not pass”.

There is one guy however that the retired Bowen refuses to stop and that’s new star LaMarcus Aldridge.

If you thought the San Antonio Spurs Finals MVP from their last championship, last year Kawhi Leonard was a lot like Bruce Bowen, check this out. Moving to a new era these classic Spurs have brought in Tim Duncan’s eventual replacement, Aldridge, a lot like when the Admiral David Robinson was teamed up with Timmy for a few more chips. Alongside the remaining big-three of Ginobili and Parker and new guys like David West the Spurs have a great conference contender for now and the future. It’s all anchored around LaMarcus however whose calm centered demeanour and game focussed play is a young android update and upgrade of veteran Duncan, the greatest Power Forward to ever play in the NBA. So much so that San An’s L.A. is like a mirror image of number 21 T.D. on the Spurs River Walk. LaMarcus Aldridge even wears the number 12 for your reflection.

But wait a minute that was Bruce Bowen’s number!

Hanging next to the likes of top 50 players like Robinson, the plot reserved for Duncan and George Gervin, Bowen is taking his retired number off ice so Aldridge can sport the digits he rocked through his whole trailblazing Portland career in the Northwest. Giving his blessing with a grand gesture. Stating that he was happy in making LaMarcus “comfortable”, Bowen thought it was fitting to hand his jersey down especially as he wasn’t using it anymore. This is the classiest move from the former hard-nosed defender who besides now looks the part as a sideline reporter. Bringing the bow-tie back he doesn’t have to worry about old fashions.

So the legend of number 12 plays on. But we’re sure even if LaMarcus Aldridge spurs on a San Antonio career worthy of the rafters, Bruce Bowen will always have his place up there.