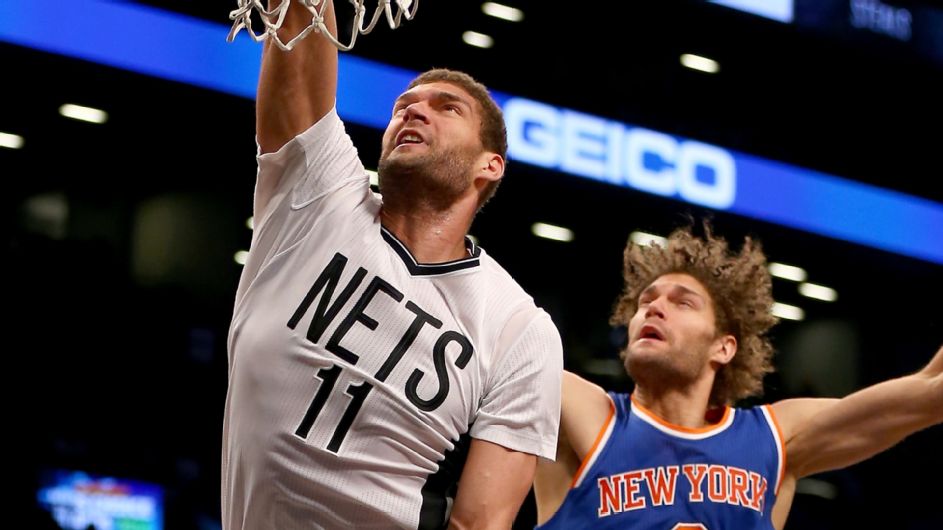 Minneapolis may be one of the Saint Paul twin cities in America, but unless the Lakers move back to Mikan’s old neck of the woods and join the Minnesota Timberwolves, their Los Angeles home with the Clippers will be the only city that houses two NBA franchises.

That is of course apart from New York, New York.

Ever since the Nets cut down the nylon in the Meadowlands of New Jersey and made Brooklyn where the sleep, the New York rivalry with their storied neighbors of the Knickerbockers was stepped up a Times Square electric notch, even if the mediocre play of both Big Apple teams didn’t and remained rotten.

Still at the core of all these hard N.Y. times there’s a sweet story amongst the struggle and it has rewrote a whole new captivating chapter this year thanks to Manhattan’s Madison Square team inviting a Portland player into the Apple of their Garden.

With Robin Lopez now in the ‘bockers middle, his wild play and hair are the perfect counter and sibling and squad rivalry to his twin brother Brook out in Brooklyn.

And last night standing tall in opposition like the Chrysler Building and the Empire State in the heart of the city, these brothers in arms both looked to reverse their teams dire straights and scale new heights in this fight for N.Y.

Brook’s brother Robin had 10 points in this battle for Gotham but it turned out his brother was Batman in this ‘Dawn Of Justice’, ‘Civil War’ like a clash of superheroes and friends becoming foes like Daredevil and the Punisher going bruise for bullet out in Hells Kitchen, not a few blocks to the right. But you should have seen what Brook Lopez cooked up last night to the tune of 33 points, 8 rebounds and 4 big blocks. Now is he Batman or Superman?

As the 15-40 Nets beat a 23-33 Knick teams 109-98 the survived an onslaught from some of New York’s finest. Franchise face Carmelo Anthony had 22 points, 6 assists and 7 rebounds. Whilst his Rookie Of The Year candidate sidekick Kristaps Porzingis tapped in 18, 8 and 3 of his own blocks that showed the real big man battle laid in the paint with him.

Still when it came to the Nets it was nothing but Lopez who showed the B.K. team should be renamed the Brook Nets. He bested his brother and all the other orangemen with his dominance with the peach. No question he was the better brother and player this evening as he handed down an a## whopping. The only question remains is why wasn’t this guy in Toronto? We could give you more than 6 reasons. Points, rebounds, blocks, dunks, grind, hustle, heart. With all these big numbers and games-even on the Nets-how is he not an All-Star? How is his brother not? Or even other big men he goes to war with like Washington and Poland’s Marcin Gortat?

Either way if you thought the age of big men was dead you should think twice. It was born again and again 27 years ago. Now you can look forward to the next few with these two and their twin teams of the five boroughs.

So good you’ll have to look at these names twice!