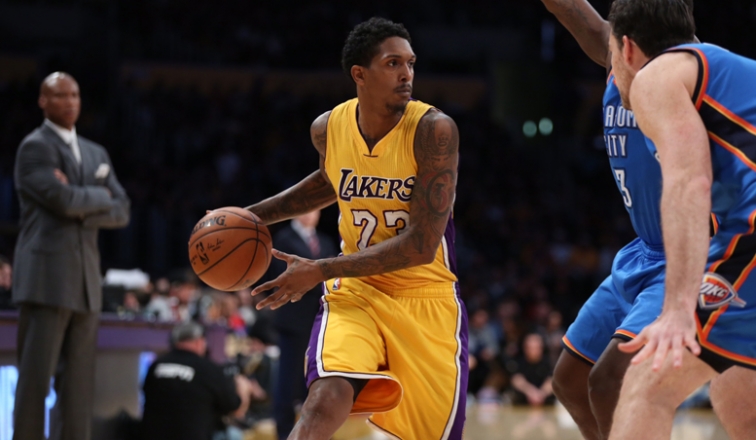 You know what? Sometimes it actually does rain in Southern California.

Continuing our road trip from New York To California, BasketballBuzz hit Los Angeles from San Francisco on Wednesday and was greeted with a shower of rain so heavy you would have thought we had got on the wrong connecting flight and headed to London.

But that was nothing compared to the monsoon that was about to hit us in the real Sunshine State.

The Thunder really was in town as OKC dynamic duo Kevin Durant and Russell Westbrook looked to make it rain in downtown Los Angeles. And they really did as Durant’s Kobe like 24 and UCLA alumnus Westbrook’s 36, 12, 7 and one monster dunk to make up for a missed one helped this Oklahoma City team umbrella the Lakers 117-113.

But when it came to precipitation, Louis Williams was all water.

The former Toronto Raptors Sixth Man that has won awards and rap records subbed in and started for the Lakers, working the night shift as their number two pick D’Angelo Russell was taking it easy after a big game and rolled ankle against Sacramento. Telling the press after his 27-point outing that we “ain’t seen nothing yet”! Yet Lou Williams was King last night in California as he rained in buckets and three-after-three against the Thunder for the Lake Show with a career high, Jerry jersey 44 points (the first Laker since ’03, not named Shaq and Kobe to hit a margin this high) in this clash with the West’s best. Including his own jersey number of 23 points in the fourth to go with the fo-fo, almost winning it all for the Lakers and treating the Spalding like it was red, white and blue.

Must Read:
The return of the MAC? Tracy McGrady works out with Kobe Bryant

Williams was a Johnson microwave when most thought the game was in the Chick refrigerator. The Lakers just wouldn’t let Oklahoma staple them up at home. One of the most impressive things about Lou’s pure play was his ability to draw fouls from further downtown than Figueroa and then head to the line for three freebies. Normally it’s only paint players that can post up plays like this, yet L-Will is turning it into a sacred, lost art form from the Basketball Gods. He’s another facet and asset to this struggling but surviving Lakers team, including their post and point fantastic four future of Russell, Clarkson (a nice 17 after some big games, not to mention a buzzer beating, halfcourt heave), Randle (who only got on the board as fouling out after some recent struggles) and Nance Jr (you just have to love this kids hustle, nobody goes harder).

And of course who could forget Kobe Bryant? BasketballBuzz on our own retirement tour couldn’t, looking to catch a game and glimpse of one of the best ever one last time.

And what a look it was with 19 points and some of that vintage vino to go with some streetball for a man whose tongue was flicking…not like Jordan but the Black Mamba serpent he is. Bean Bryant passed under Durant’s legs and even Jay-Z tripped a referee.

But sadly soon like one of the best ever Lakers and defenders to ever play this game Michael Cooper, signing autographs and dancing with fans outside of STAPLES, it wont be long before Kobe’s a retired legend. But despite all this and against two of the leagues top five in their prime this young Lakers team of the future showed something both Kobe and the fans can find solace in…