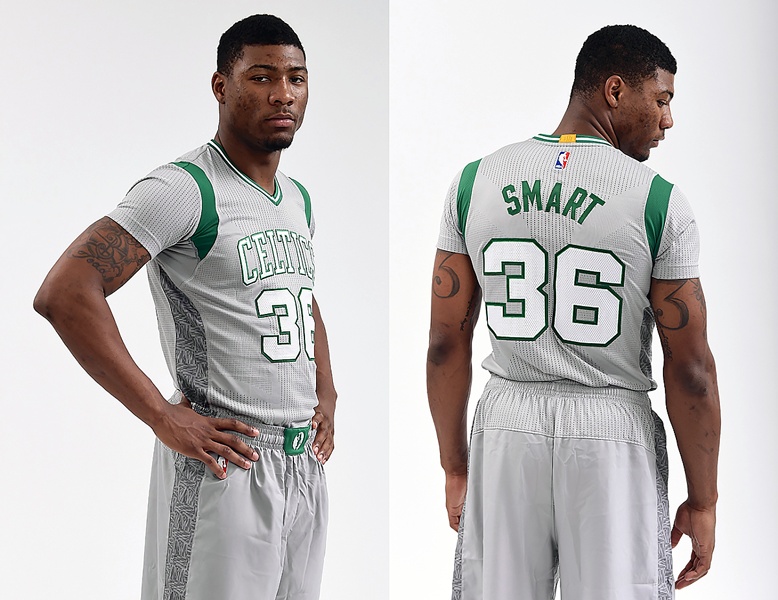 New Boston Celtics Jerseys Are Proud Of The Parquet

Love them or hate them, those alternative sleeved jerseys are back!

Following the Lakers ‘Hollywood Nights’ remix with new material, the most storied franchise in the National Basketball Association is making a change from their traditional green and white.

The blue-collar work of the Boston Celtics is being celebrated with sleeves on. The new ‘Pride Of The Parquet’ grey colourways almost look the NCAA part, but Boston College is only down the road. Still as rookie Marcus Smart debuted these new Adidas revolution unis, whilst Rajon Rondo’s Point Guard leading future hangs in limbo, its clear-even in a shade of grey-that this is the future.

Hate me-especially as a Laker fan-for loving these jerseys that are receiving even more disdain than the Golden State Warriors ‘Slate’ alternative swipe. But the ugly the better I say. Featuring some parquet inspired piping and the ‘Lucky’ Celtic logo, along with a Larry O’Brien championship one, this jersey is for the legacy lineage of the Celtics legendary history. This grey is more than black and white.

Debuting on the ‘Black Friday’ of November 28th against the Chicago Bulls these things may just be the big sale. These alternatives will be road tested on Boston historically significant dates when it comes to hoops. The first marks the 25th anniversary of Larry Bird scoring 20,000 points on Nov. 30, 1990 against the Washington Bullets.

Must Read:
The Twin Cities load the perfect teammate for Towns

Whose going to catch it? Every Celtic fan that knows their history with no grey areas. The kind of fans who miss the real Boston Garden that came down in 1995. Those who appreciate the kind of hard work that only comes with rolled up sleeves.