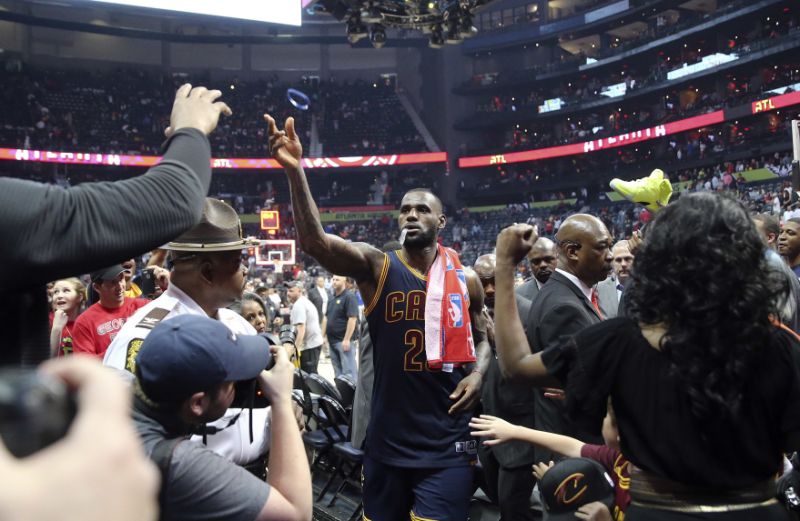 Human Highlight Films usually come in triple-doubles and the King almost sat on one in this game this weekend as he passed an Oscar acclaim that he’s been linked with his entire career.

After passing Atlanta Hawks legend Dominique Wilkins on the all-time NBA scorers history list last week, LeBron James went into the A and left with an 110-108 overtime win over the ATL Hawks, (here’s how the rest of the numbers racked up in this high scoring affair; Kyrie Irving had 20 points, Paul Millsap 29 and 12 rebounds. Whilst Jeff Teague had 28 points and 9 assists aswell for Atlanta), 29 points for the game and 26,711 for his career. Good for 11th on the all-time list as the King passed the Royal legend Oscar Robertson to a whole new awarding association academy. One he is appointed to with NBA storied royal decree.

With everyone focussed on the Celtics cooking Curry’s Warriors, Kobe’s L.A. Leaker problems with D’Angelo Russell and what’s the brief on Pelican Anthony Davis, LeBron James is quietly going about his business showing he’s still not only the best in the game today…but all-time too. The one and true King. But with a great 16 rebounds and 9 rebounds in this O.T. thriller James wished he could have one-upped his double-double and made it a triple in stepping over Oscar like Allen Iverson did his coach Lue, to honor the Cincinnati Royal player he’s been statistically recorded with since his rookie debut back in 2003 against coincidentally the Kings.

But he’s not the type of player to throw the ball against his own backboard to get another rebound like an old Cleveland player in the before the King tanking days of the Cavaliers.

You thought we forgot about that didn’t you Ricky Davis?!

I wish I could’ve had a triple-double in passing him as well,” James told press later as reported by ESPN. “That would’ve been the perfect thing. Any time I’m linked with the Big O, it’s an honor for myself. I understand and know how much he meant not only to the game of basketball but what he represented off the floor. It’s special to be linked with a guy like that who was so special.”

Must Read:
Clippers Leave Lakers Under The Tree On LA Christmas Day

And linked he’ll always be. They say it all comes in threes. Now what will come?

Who’s next? Hakeem Olaujawon. It all looks like just a dream for the Rockets legend, but Houston we only have a couple of hundred and counting to go. Not even the Air of Jordan could pay LeBron a billi to walk away from this one. Once its all said and done James could crack the Top Five and join Mike, Kobe, Karl Malone and the evergreen and gold leader Kareem Abdul-Jabbar.

The Top Ten looks fit for the King.