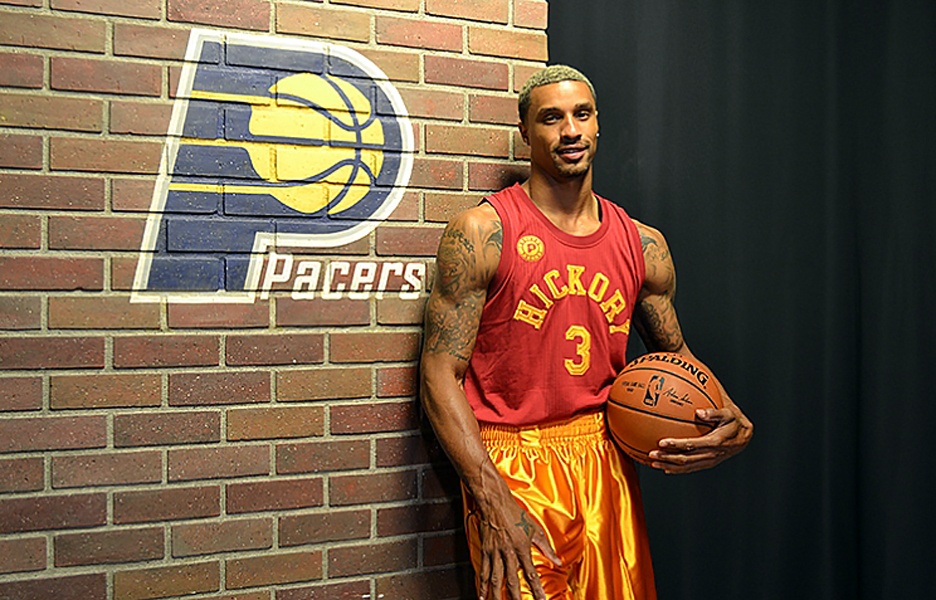 But this year one of the greatest basketball films ever to hit screens like Reggie Miller is no longer in it’s twenties like this writer….where does the time go? We’re so old!

The Reagan and Delorean era 80’s gave us ‘Hoosiers’ one of the greatest movies about sports most beautiful game next to Spike Lee’s ‘He Got Game’ and Wesley Snipes and Woody Harrelson’s ‘White Men Cant Jump’. I’m sorry ‘Space Jam’ fans…and ‘Like Mike’ ones too.

Not only did the movie starring Gene Hackman garner some serious Oscar nominations including one for late, legendary actor of ‘Apocalypse Now’ and ‘Speed’ fame Dennis Hopper, ‘Hoosiers’ also became iconic and instantly identifiable and influential with Indiana basketball.

Just check out how classic those white and red college jerseys even look in the test of time standing today.

Now look no further as to celebrate the anniversary of where amazing sports film happens, the Indiana Pacers have gone one sneaker step further than all these neon and vintage new jerseys that have been released by all sorts of teams this Summer by breaking into Mitchell & Ness’ locker room and bringing the throwback back to rock with the rock.

The Pacers are bringing the classic Hickory uniforms back for select games this season. But they look so good we could watch them run in them all season long like the ‘Picket Fence’ play, no matter how good their simple but sublime signature set of home, away and alternative look along with their more traditional throwbacks.

And you thought the new ATL Hawks mix and match sets where ugly/beautiful?

Well these are full 90’s Ewing sneakers in their different but dynamic design. Sure like any jersey older than father time they look a lot like practice unis. But trust there will be more weight to this amazing apparel once the warm ups are ripped off.

Other teams won’t know what to do when they see this mismatch on their six. Perhaps this is Indiana’s home jersey advantage. They’ll need it and a reason to get excited as their former Sinister Six that almost lead them to the finals and championship contention is now the clean-up past of cobwebs.

So it was up to the only other Pacer George and marquee player to suit up as George Hill debuted the new Indiana/Hoosier joints on Instagram. Posing next to the classic Pacers logo on a brick wall that this franchise faces in more ways than one.

The cool, throwback photo was made complete with Hill’s hair dyed gold. Whether that was inspired by the jerseys remains to be seen, but it clutched some characters from Indy legend Reggie. It’s a little too wishful thinking if it was championship gold because even the Larry legend of Bird can’t help the Pace fly to the legacy heights of O’Brien.

Still looking the part is one way to start, even if the Pacers are paying homage to a somewhat fictional team only loosely based on history book fact. This isn’t the movies, but still a major move that shows more than just style, but class too taking it back to the old school halls of court and cinema fame.