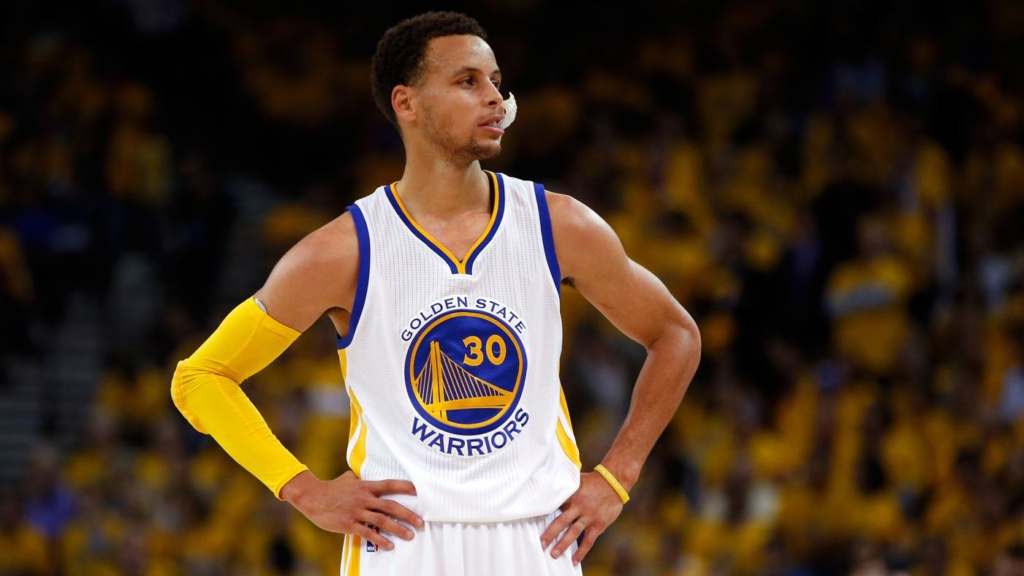 Kanye West once stated on stage “I felt compelled to do the ‘Watch The Throne’ album because of Drake”. Now if we can instill that statement in a basketball standpoint. LeBron James would be Kanye West. Steph Curry would be Drake. By way of explanation LeBron James guard your throne firm!

Coming off an impressive 67-15 record last year. The Golden State Warriors have proven to not have missed a beat. It’s been a comprehensive year of this team dominating the NBA. Who to blame for this team fantastic uprising? None other than last season’s MVP “Steph Curry.” He Shepard his team on and off the court.

Pluming opponents with their sharp shooting. You hear reporters countless times stating “you live and you die by the three.” Steph Curry & the Golden State Warriors has certainly lived by the three, and lived quite well. Curry helped his team’s brilliant season momentum linger on to the playoffs. To win the championship over Lebron James & the banged up Cleveland Cavaliers.

To Lebron’s defense, Kevin Love and Kyrie Iriving easily, the second and third best players on that team, we’re both out with injuries. However, we cannot overlook what Steph Curry did last year. Despite not winning Finals MVP.

His leadership off the court was noticed, during Andre Igoudala’s accepting speech of his final MVP award. He said “When I grow up I want to be just like Steph Curry.” Even though he’s older. Andre Iguodala acknowledgement of Curry’s approach to life and basketball is phenomenal. Every NBA champions go through some kind of a tough stretch.

Last year after breaking his 3-point record for most 3’s in a season and winning the MVP. Steph Curry would have to face a member of the All NBA first team in each round he played. He went on and eliminated every players alongside with him on the All NBA First-team. Perhaps that was his toughest stretch despite making it look easy!

What he’s done this year already, is surreal. Enjoy fans! We will not see something like this in a long time, maybe ever again. Steph Curry & his Golden State Warriors have started this season 22-0! Having won 26 straight game (counting last season). Steph Curry is averaging 32 PPG, 6 assists & 5 rebounds in the first two months of the season.

Currently he has knocked down 116 three pointers already. Nobody in NBA history has made more than 300 threes in a season. He’s on pace for 400 threes this season. Golden State is averaging 115 points a game. Making 43% of they’re deep bombs. Their numbers are remarkable. Already breaking records in NBA history.

Steph Curry’s play has been one for the ages. Many has launched the debate that Steph Curry is already an all-time great. One might say that this statement is preposterous but his numbers say otherwise. The only player to have averaged 32, 6 & 5 is Michael Jordan. No player has ever averaged 4 threes a game he’s averaging 5.

Curry is leading the league in points per game, field goal percentage and free throw percentage. He is second in steal. Only Wilt Chamberlain has averaged more points per 36 minutes than what Curry is doing right now. He already has four 40 point games and one 50 point game in only 22 games. He also has more threes made than three NBA teams (Heat, Timberwolves & Nets). With all these historical numbers Curry has been putting up it’s clear that Curry is on the verge of becoming, if not already an All-Time great.

His game has been so fascinating that fans are now showing up to pre-game warm-ups just to see curry shoot. Only player to attract as much fans as Curry is in the pregame, was the one and only Michael Jordan. Pretty cool name to be in company with!

After having many people discredit the Warriors success last season. Some because of their health, their journey to the Finals e.c.t. Steph Curry started training camp by stating “I just want to say, I apologize for us being healthy. I apologize for us playing who’s in front of us. We’ll rectify that situation this year.” It is clear that thus far they’ve definitely rectify everyone’s perception on their team.

Must Read:
It's Klay Day (and everybody's celebrating)

They’ve proven to not only be the best team thus far this season. But also being one of the best teams in the history of the league. The NBA record for the most consecutive wins is 33 by the 1971-1972 Los Angeles Lakers. If Golden State continues this streak. To Give NBA fans a gift for the ages, their 33 consecutive win will have to be on Christmas Day…. Against Lebron James! & the Cleveland Cavaliers.

Will Golden State stay undefeated ’till then? Or will curry lead his team to set a tremendous NBA record by passing the ‘king?’ Like the previous month, December will be quite the month for the Warriors. Nonetheless, if this streak reaches 33 or not. Steph Curry & the Golden State Warriors are living the dream and seem to be unstoppable.

Curry is already worthy of MVP consideration, most improve player consideration. Hall of famed consideration and the greatest shooter ever consideration! As Kanye West pointed out to Drizzy. NBA fans should point out to Lebron to ‘Watch the throne’ Steph Curry is coming!