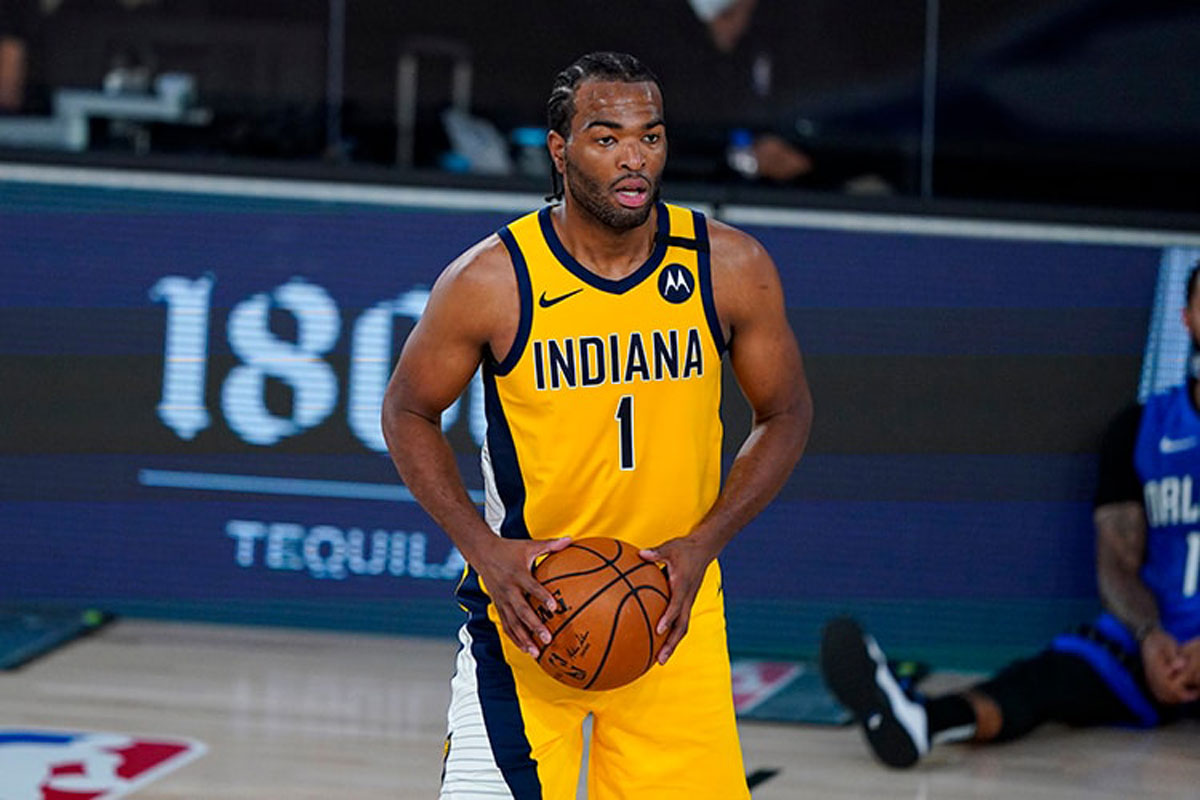 T J Warren Is Bubbling In Florida For The Indiana Pacers

The new Kawhi Leonard with matching Sprewell cornrows? The next rags to riches Jimmy Butler, Most Improved star getting all up in his grill? Face-to-face like their beef that could cook up a great first round match-up. Dancing like Jordan in the last part of this season more thrilling than those tuning into the ESPN and Netflix documentary in the March madness of no hoops like Mike’s ear lobes.

Now that last comparison may be as far fetched as defenders trying to steal swipe the ball from the man who can create his own downtown shot like street hustlers. T.J. may not be M.J., but write him off now and he may just bust your you know what and give you 60.

Hotter than the Florida sun at this time of the year. Like not exchanging your Benjamin’s to Disney dollars, there’s not much to do in this Mickey Mouse land except hoop and fish like what a lot of teams will be doing soon come playoff time. Just check out Clipper Paul George’s gram.

Back in the day that former Indiana Pacer was taking it back like a Hoosier running the Hickory, Dickory, Dock, white picket fence. Taking it back to the time the ultimate villain Reggie Miller was choking everyone like Latrell in the Garden. All until Kobe leapt into Shaq’s arms in the year 2000 to start a new millennium and dynasty.

Stepping in for Danny Granger, P.G. set off the new Indianapolis 5.00 with George Hill, Lance Stephenson, David West and Roy Hibbert in the post Miller time years, trying to recover from the Ron Artest ‘Malice in the Palace’ before all that World Peace. Then before that team got to cross the finish line it crashed and burned like Jermaine O’Neal throwing that punch and hitting the deck.

Must Read:
'Last Chance U: Basketball' Is This Seasons 'Last Dance'

Since then it had been hard to keep pace until Victor Oladipo came into town in those racing City uniforms and ran everyone off court, including himself (following some pit stop injuries looking under the hood). Now the full time basketball player and part time singer has someone providing more than backing vocals for this one, two punch duet.

Sure the 5 and 0 Suns have been scorching everyone-especially on Twitter-and Luka Doncic just beat Giannis and the Bucks with 36 points, 19 assists and 14 rebounds to show us he really deserves to be a MVP finalist instead of a Most Improved one, but Warren T has just regulated the West best Lakers and the King.

His 39 came with three more than Luka and a downtown dagger to go along with his floater as he burst the Lakers bubble 116-111. Exposing cracks in the crown as we watched what we thought was the throne.

Handing the Lakers the L like the first letter of their name, Warren had been on a tear as he is rewriting all the headlines coming out of this quarantined game. Locking it down with 18.7 per, but 34.8 over his five games in Orlando so far. Now that’s truly Magic. So much so it could even make Earvin Johnson’s smile disappear.

The Pacers have been without Domantas Sabonis in Florida, like the Portland Trailblazers went without his big pops for most of his career, but Indy needn’t worry. They’ll have a big three like their rising stars clutch one when he comes back. T.J. Warren has a Basketball Jones and the 26 year-old in his sixth-year is showing out.

Lean, mean and looking like a throwback, the future of the Pacers can go 30-for-30 on any given night like ESPN and his beyond the arc percentages are the same as three-point legend Glen Rice’s Jersey number.

Must Read:
Randle To Play Today

The Pacers or the L haven’t had a T.J. this good since Ford motoring in Indy ran all over the court like a mighty mouse under a dinner table. Eat up, because the talk of the town isn’t the Bubble food anymore. Now, Warren is serving everyone. Rabbiting as soon as he gets the ball.

That’s not all folks.

It’s far from over for the Pacers. You’ve seen them keep up. Now watch them run.