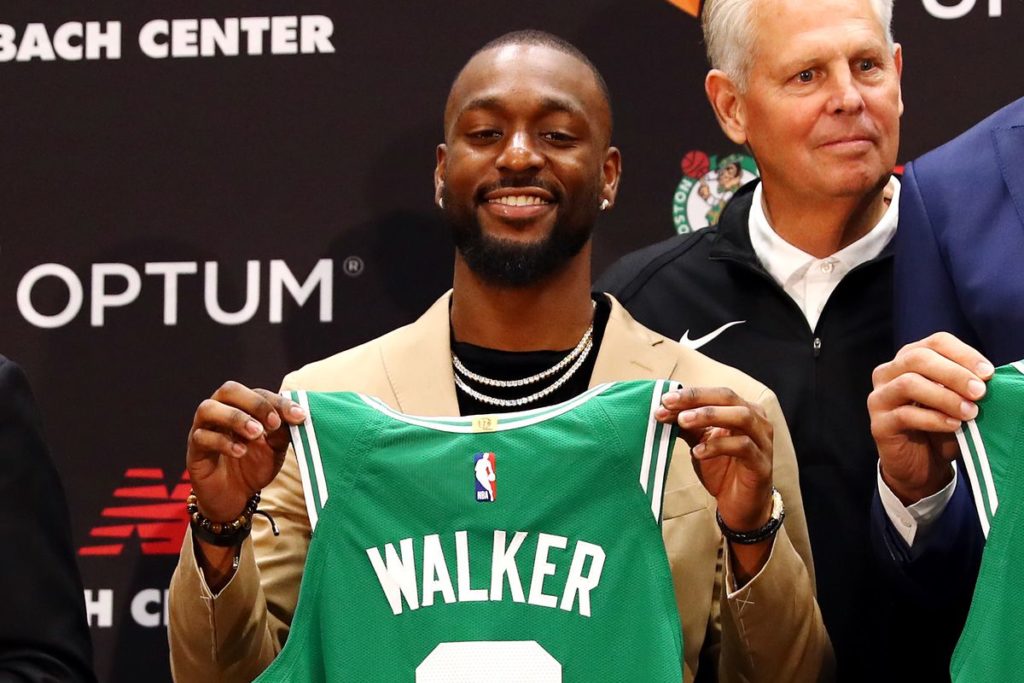 The 8th Wonder Of The Celtics

Why you shaking that shimmy like that? Sometime between the big three of Boston Celtics legend Larry Bird’s shot and the big-three of Kevin Garnett and Ray Allen formed by Paul Pierce (sucks…just kidding), his former dynamic duo partner in the age of Shaq and Kobe, Antoine Walker had a decent one on him from downtown. Which he’d shake and bake before breaking out that signature dance. Stepping out after cutting a rug against his opponent like leaving broken nail patches in that old splintered parquet floor in the garden. As the one/two punch of ‘toine and P-Double really were the truth. I’ll always remember the time these two and the rest of the Celtics led by Horry like (I love Waltah) super microwave sub off the bench Walt McCarty took the Sixers to the statistics with a box score barrage of threes. Even Mark Bryant was getting them (old Mamba). Everyone was shaking the shimmy, like Walker this way. A certified classic Celtics legend.

“And just then, the highway opened up-right at the junction, right at that spot on the highway where you see the skyline of Boston, and you go, “What!?” Because it suddenly goes from trees, woods, and crickets to cars flashing by and skyscrapers and apartment buildings…Just at that moment, I went “Oh, s***, the city!” That’s what Boston boy, Aerosmith legendary lead singer Steven Tyler says about entering (ha, ha) his New England home. And from a guy whose got there from New York on more Peter Pan and Greyhound’s than Tinkerbell and Santa’s Little Helper, trust me the ‘Dude Looks Like A Lady’ singer is right about this moment of sweet emotion. Try and catch a shot on your smartphones all you like (believe me…I’ve tried and failed), but you won’t want to miss a thing. Now I’m sure Kemba Walker’s journey to the city will be a lot more glamorous than crying whilst binge watch episodes of the latest ‘Stranger Things’ series on a coach trip. But he’ll get plenty of chances to see this skyline envelope him in all its epic, awe and scribe inspiring feats when he rides the team bus.

Because now after Kyrie Irving left the opposite way for no sleep on the drive to Brooklyn with Kevin Durant, the city is Kemba’s after he said goodbye to Charlotte and the Hornets nest.

A little disrespectful of a heartfelt Nike commercial, but then again so is Kyrie ghosting the Celtics like Peter Parker’s Spider-Man did Nick Fury ‘Far From Home’.

Kanter’s banter is the off-season Iverson step over of the Summer. And him playing a bunch of Boston kids on the playground full court in his full uniform is the hallmark, heartfelt moment of the year. But keeping the uniform on and sticking with numbers, the new star of the show Kemba Walker hopes to be the new eighth wonder of Boston’s world.

Now although he got legend Antoine Walker’s blessing, I originally believed that Boston should have already raised this to the rafters with a shimmy for their original employee number 8. The biggest wonder of that digit since the Black Mamba in the same ’96 draft class of its own. Even if Kemba hilariously tells us that there wasn’t any other numbers left with the amount of legends that have retired with the NBA’s most storied franchise (Walker’s old 15 obviously being retired for Tom Heinsohn). Up in the banner ceiling with all that dust and Red cigar billowing smoke. But then this writer realized that it was probably just jet-lag after his Beantown trip last week, or the Laker fan in me trying to pick fault with a Boston I love more than most purple and gold (in this garden every Batman need his Joker who he really, truly loves madly, deeply (savage)) talking.

I’m actuality it’s really a beautiful homage. They both have the same last name Martha. Now if Kemba unlike Kyrie makes sure that no one else ever wears this number in a fitting moment they could retire both players together, like their Laker rivals may do with LeBron and AD once the 23 is passed next year, as the King looks to have more jerseys retired in Hollywood than Kobe.

Antoine and Kemba together forever.