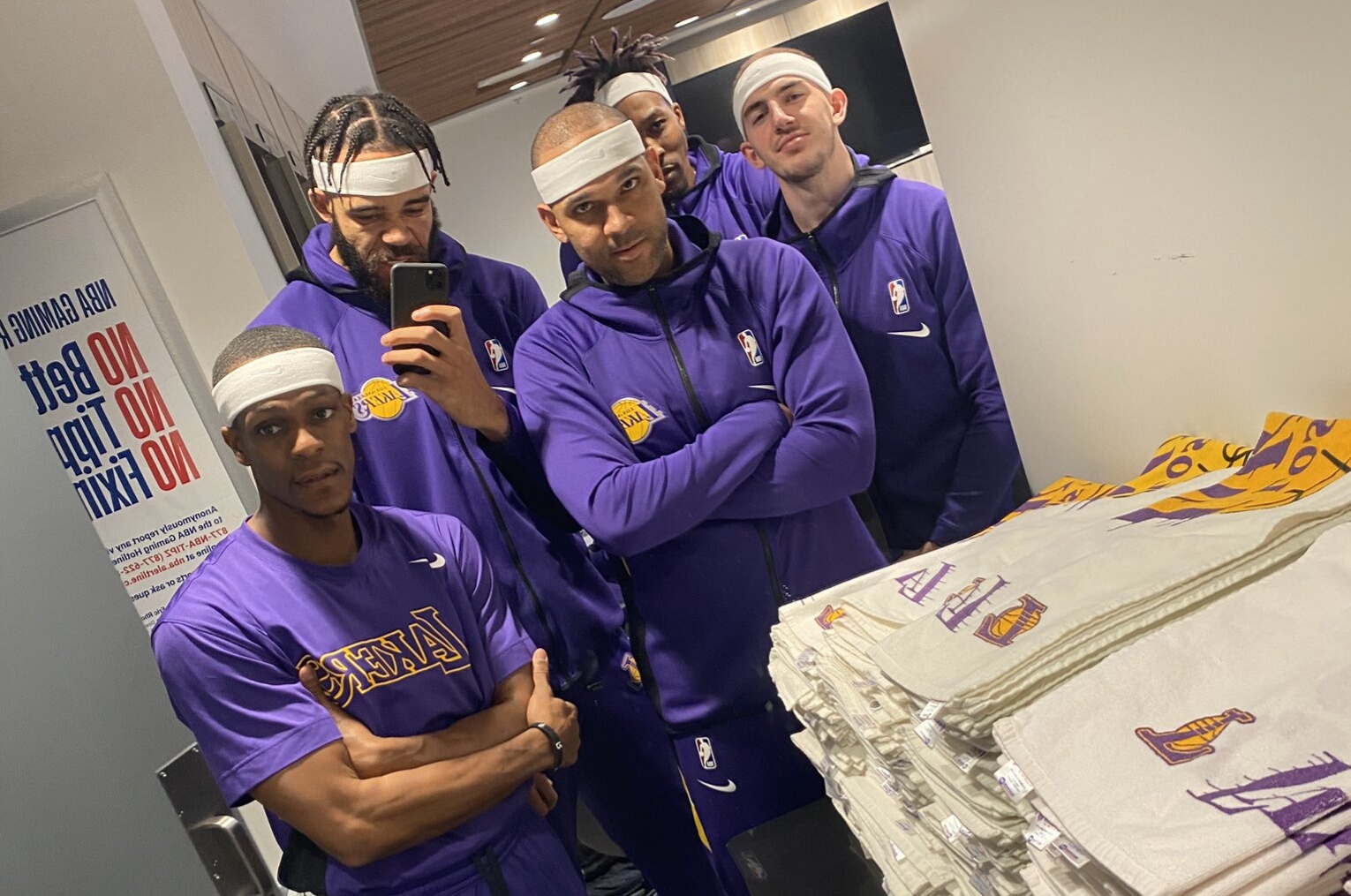 Last night in the Lakers last game, Point God Rajon Rondo drove the lane against the Knicks at STAPLES and got hammered so hard on the play by New York that his headband came off clean like Mo Pete (real Raptors know the reference). Softly landing on the floor like sweat about to be swept like everyone the Lake Show played expect Iverson stepping over and back to 2001, it went from high fashion to a potential trip hazard like high heels in as many a step on the players entrance catwalks. So ‘bocker Bobby Portis kicked it away and out of bounds like Autumn leaves, or dust under a rug with dismissive disrespect.

Portis was then booted and tossed from the game in the same fashion, as a few flagrant plays later it looked like number 1 was trying to take the headband off fellow digit KCP or his whole dome, as he slapped his head like the fellow crew cuts of Caruso and Jared Dudley. But credit where credits due after getting ejected, Bobby took to Twitter to show he meant no harm, even if it was a foul like a sixth personal.

You know what I’m thinking?

Where are all these headbands coming from?

Someone tell the Lakers kit manager to not put any purple and gold in with this whitewash.

The Lakers right now have more sweatbands than when you created yourself as a player in the NBA Live 2000 game like EA Sports. So much so like banana boats they even have a crew. See the above photo rivaling that Bradley Cooper Oscars selfie featuring Brad Pitt, Ellen and more who probably still can’t get over Ricky Gervais Golden Globes speech this weekend. And there’s more than that too like headband legend Derek Fisher. You already know about the new Pope and sometimes even LeBron James brings the Miami headband talents back to Venice Beach like tossed chalk, or the 6 he hopes to carry next season.

With the King in the ring and all hands on all his men’s deck then you for sure have an accessory team that could go head to toe with anyone. But even without 23 you still have a headband dream team that could sweat soak any squad.

Assemble your crew…they’ll be outside.

And at this point anyone can rock it like Kyle Kuzma and Quinn Cook. That is if they don’t end up getting switched from the Kings team to the other California Kings alongside sweatband injured list superstar DeMarcus Cousins in the headband Hall-of-Fame

But how about the bigs behind Ant Davis in the Kevin Ding described lighthouse searchlight of JaVale McGee and Dwight Howard, who can even go downtown like Pico and Figueroa as they can sneaker to sneaker for Defensive Player Of The Year? Howard to his Hollywood end could even be Slam Dunk Contest champion in Chicagoland this February. A decade after going back-to-back like Magic with that Earvin Johnson smile for Orlando in this his redemption season. Chi-city native A.D. says he will assist in any way he can.

But the Lake Show know who they really want up there dunking for himself in the Bald Mamba of Alex Caruso. Voted into the top ten of All Stars this year for the Carushow. But we know what contest we really want him in this weekend. Just like the following play in last night’s Knicks game, when this ABA throwback rocked the baseline like Red Hot Chili Pepper Flea with an ‘Acid For The Children’ slam, that contest nomination write in was all held up 10’s out the seats. Even most famous Lakers Hollywood fan Jack Nicholson was back in his courtside seat for this hereees Johnny!

Like sweeping dirt off his shoulder, Caruso thumbing and adjusting his headband with fly flair for his new signature celebration is swag and Carushowtime personified. Band him as your small forward with a Rondo and Pope backcourt, that formidable frontcourt and Jared as your sixth and that’s quite the striped lineup. Add a Heated LeBron and it’s over as the headband dribbles and wraps around you like a headache.

In twenty years time you can just picture this class of ’19 reuniting for drinks, all looking like Alex and Jared (sorry JaVale and Dwight with that purple or gold Lakers dreads…it happens to us all (I should know)), all bringing their headbands to the party.

Tap your empty Coke glasses together, the Lakers headband warriors are coming out to play.