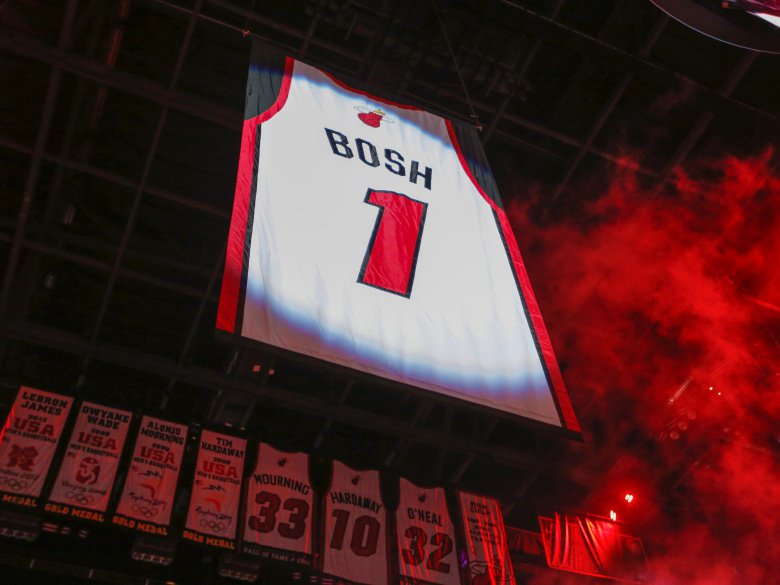 The Miami Heat Say 'Thank You Chr1s' With Rafter Raise.

6 God before Drake, Chris Bosh was the one after number 15, Vince Carter soared high like Air Canada to take the Toronto Raptors back to the clouds with his Dino dreads swinging in the wind. Back in 2006 when Bosh was in his prime and it was Toronto’s time like right now behind the big-three of Leonard, Lowry and Marc Gasol, CB4 was the one before DeMar DeDozan. He almost looked taller than the views of the CN Tower, the glass ceiling was that high.

But now it’s the Miami Heat that are looking to that same ‘Gods Plan’s perch as the former number four and fourth pick in the draft becomes the fourth Heat legend after the crossover of Timmy Hardaway, the passion over pain of ‘Zo Mourning and big Shaq himself to have his jersey raised and retired to the rafters of American Airlines. On a special night for a special player in an all Florida clash down south with the Magic of Orlando’s Kingdom a long way from Disneyland, who actually came away with the 104-99 win tonight.

But this night wasn’t about all that.

No matter the talent in South Beach, he’s the only one that will ever wear the number 1.

Voltron forming, there is no doubt also that the rest of the doubled up, ringed big-three of the Miami Heatles will have their pride of place right next to the banners they helped build up there. The talents of number 6 God, LeBron James before the return of 23 in The Land and the Laker one. And the most iconic 3 of the big-three, Dwyane Wade, on the One Last Dance retirement tour season now playing in an arena near you.

Must Read:
Does The Lakers Future Belong To A Kid Named Bryant?

Flash in a mob has already retired signed, sealed and swapped signature versions of his in-game ones to the best opposing player night after night. But on the week Chris Bosh celebrated his 35th birthday last night was a coronation for one guy and one guy only. As although everyone talks about his draft class and teammates Wade and James and their All Star reunion dunking photo fit being in the “name a better duo” stakes, you don’t need to wait. As it’s all about three in the M.I.A. and this one in particular. Those white hot Heat doubles were just as much powered by Bosh. It’s kind of fitting this number one went up first.

“Unfortunately for him, he had the fifth pick and I went at four, so he had to settle for this kid named D-Wade,” the ever, very funny postgame interview bomber quipped to fans during his quarter long speech at halftime, punctuated by one of his passionate, trademark screams (can we the North call it one last Raptor roar?). “And D, I’ve got to tell you man, sorry about beating you to this jersey retirement thing. I had to beat you at something.” As fans “oh no he didn’t” reacted like that downtown Miami block that put the Spurs on their heels. Trust this guy.

Everybody loves this Chris.

And they thanked the one weeks after he earned a Vice edition of one of Wade’s autographed Miami numbers like that hilarious Carmelo Anthony Photoshopped, free agent jersey exchange. Bosh brought 18.0 point and 7.3 rebound above averages to sixth sealed seasons of All Star status and we’re sure a Hall of Fame stature call, before life threatening health problems with blood clots he has now bravely recovered from threatened to stop more than just his playing career.

The gum shield passion could probably still ball. And comebacks with the Lakers before LeBron and even a Heat homecoming like Wade’s Flash return were rumoured. And if it has it one day that the number one will be brought down one more time to save one last dance with Wade then it for sure will make for a Cinderella special moment with the pumpkin peach. But is this is the final ball and the iconic singular digit resides up there with the other seven foot and big-men legends, then like Heat lifer Pat Riley slickly says, Bosh and his jersey number will remain a member of Miami “forever and always”.

Time for the Raptors to bite like the Air Canada one day up their and amber preserve sap the same.

This boss was a beast. Bosh mode.

Raise the Raptor to the rafters.

In this article:Chris Bosh, Featured

What’s Next For The Miami Heat?

After losing the KING last season, it has been clear that the Miami Heat will never regain the same dominant dynasty they built the... 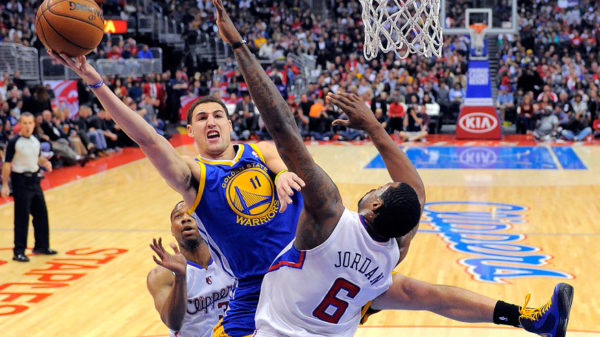 Chris Bosh and Klay Thompson the Strongest Players of the Week 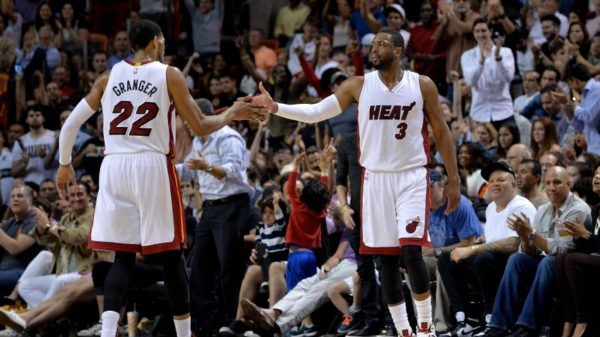 Three, two, one. In what seemed like a mere few seconds with those three little words (“I’m coming home”) the Cavaliers got their king... 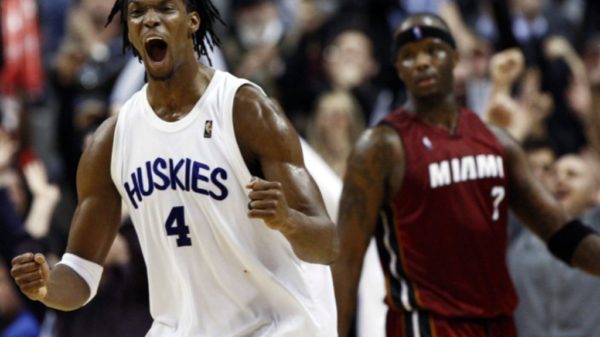 So it’s a done deal right? Even as no contracts have changed hands and no ink has dried it’s still almost a certainty that...

Chris Bosh must be hearing the backlash. Or at least someone is telling the Raptor forward that his twitter traffic has his Toronto fan...

A few things to consider about the 09-10 Toronto Raptors

A few things to consider about the 09-10 Toronto Raptors Is Jay Triano the right coach? I think we should give the Raptors coaching...