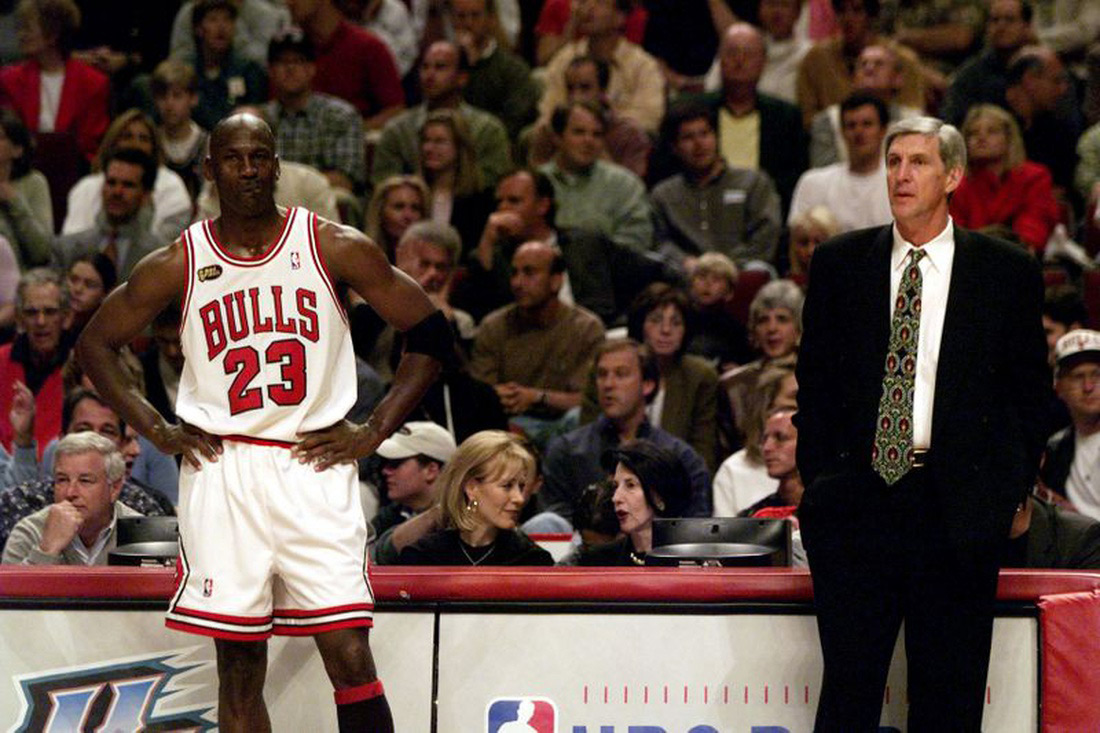 Jerry Sloan walked into the Utah Jazz vs. Chicago Bulls, NBA London press conference back in 2009 (my first major writing assignment for SLAM magazine) and I knew I was in the presence of a true legend whose legacy spanned decades we could never touch. I had already asked the late, great Commissioner David Stern my first question and even continued working up the courage to ask top Jazz Point Guard Deron Williams a couple of quotables. But when it came to the Sloan ranger, I could barely get a word out.

Sometimes you are just in awe of the awesome. Coach was as hardwood classic as cigar smoke over the parquet.

Jerry Sloan’s post-game presser reaction to Michael Jordan’s “Flu Game” was Mastercard priceless. Especially, in Utah as it was rumored that five delivery guys poisoned a pizza that M.J. ate slice-by-slice the night before he hit 38 whilst having “the flu”.

I guess you can now rename this, “The Pizza Game”. With extra cheese.

Coach Sloan’s post-game soundbites from ‘The Last Dance’ have ESPN and Netflix binged become as legendary as Scott Burrell or Jordan’s infamous, “you want to give Karl Malone the MVP? Okay, that’s fine. No problem,” pettiness. Becoming as famous as the Delta Center did like a pseudo M.S.G. for some of M.J’s most legendary moments.

Just push off on the Bulls blowout of the trumpeted Jazz to the tune of 96-54 for example.” “This was actually the score,” Jerry quipped to have the good heart to have humor even when his team were beaten (badly) by almost 40. “Is this the final?”

Man don’t you just wish press conferences were still this much fun?

‘The Last Dance’ Chicago (Michael Jordan) Bulls documentary in its top ten parts has been so compelling even non-basketball fans have been binging it. That’s just the draw of not just Michael Jordan, but the golden era of hoops history. Because like a salt and pepper beard of Karl Malone put it last year, chomping on a cigar he never got to taste in victory because of Mike, the Bulls were more than just Jordan. Like the NBA was more than just this superstar and super teams stampede out the Bullpen.

So much so friends have been asking me who that coach with the classic lines is and as I tell them I end up sadly saying the same thing.

“Ah, I’m sorry. He passed away this weekend.”

Everyone may be saving ‘The Last Dance’ on their continue watching Netflix lists, locking it down in quarantine right now, but Jerry Sloan was actually the player who asked Chicago for its hand for the first dance decades ago. ‘The Original Bull’ started a playing career that locked horns with Chi-town tens of years before a wide-eyed, gold-chained skinny rookie would light up Bird’s Celtics for 63 on their parquet to the tune of LL Cool J’s ‘Bad’ like he was God disguised as Michael Jordan.

Jerry Sloan’s Hall of Fame legendary NBA career lasted almost a half century. He played in Chicago Town from ’66 to ’76 and back then his career was as untouchable as the Elliott Ness who took down Capone in this city. Sloan’s jersey hangs in the United Center retired rafters next to Jordan’s.

“Jerry Sloan was ‘The Original Bull’ whose tenacious defense and nightly hustle on the court represented the franchise and epitomized the city of Chicago,” Bulls chairman Jerry Reinsdorf (who you may be more familiar with now) said in a statement.

“Jerry was the face of the Bulls organization from its inception through the mid-1970s, and very appropriately, his uniform No. 4 was the first jersey retired by the team. A great player and a Hall-of-Fame NBA coach, most importantly, Jerry was a great person. Our sympathies go out to the Sloan family and all his many fans,” Jerry added.

“Jerry Sloan was among the NBA’s most respected and admired legends.” Commissioner Adam Silver said of the legend who passed away at 78 following complications from Parkinson’s disease and Lewy body dementia. “After an All-Star playing career in which his relentless style shaped the Chicago Bulls in their early years, he became one of the all-time greatest head coaches during 23 seasons with the Utah Jazz – the second-longest tenure in league history.”

That he did, winning 1,221 games (worthy of its own actual banner) in a fitting 23 seasons with the Jazz. Taking the pick and roll of Stockton and Malone to the 1997 and last dance 1998 NBA Finals where John and Karl met Mike…and the rest was like a mic’ drop. Or should we say history?

Yet, you can’t count out the heart of these back-to-back finalists and Western Conference Champions. Especially the legendary longevity of a team and its coach who stuck around the wild west for years like a saloon. Even if salt was rubbed into the wounds of these Salt Lake City stars as they would never wear rings like jilted alters out in the desert.

Still striving on and before he called game and it a career Sloan found new pick and roll hope in Carlos Boozer and Deron Williams. Its a testament in tribute to this legendary leader that his team only fell below the record of .500 in just one season.

“Jerry Sloan will always be synonymous with the Utah Jazz,” the franchise added in dedication. “He will forever be a part of the Utah Jazz organization and we join his family, friends and fans in mourning his loss. We are so thankful for what he accomplished here in Utah and the decades of dedication, loyalty and tenacity he brought to our franchise.”

Coach was even “Young Money, Jerry Sloan” referenced in a Lil ‘Wayne track with a bar about how girls learn Weezy F. Baby’s. Well if you really need to know you can Google it.

Like the London game the Jazz seem to be in first to last dance matrimony with the Bulls for better or last shot worse…and no one ties this knot together quite like Jerry Sloan.