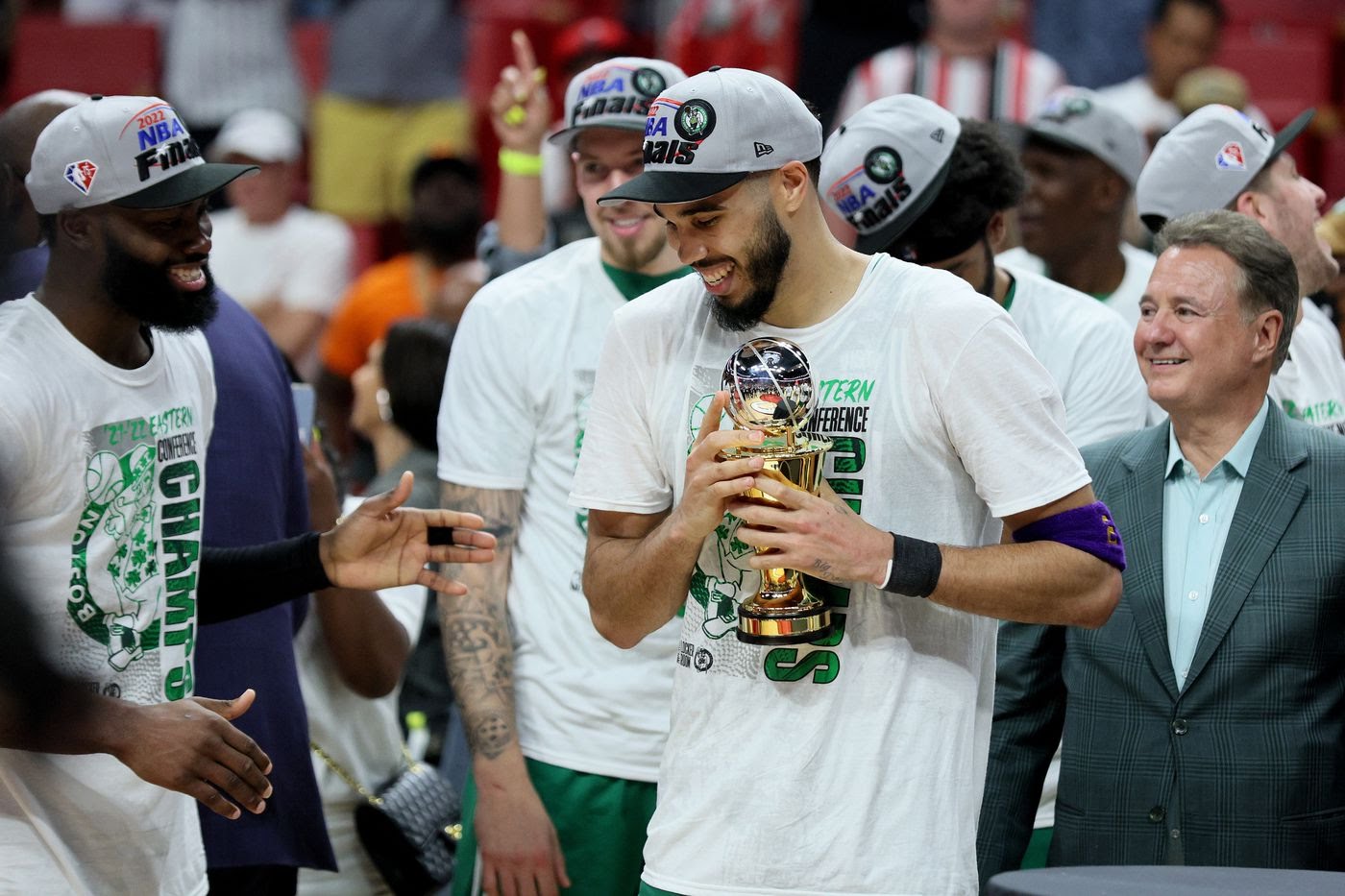 Not a chance! When you win a Game 7, you earn your place.

Lakers nation may be posting that clip of Jason Segel’s Paul Westhead in HBO’s ‘Winning Time’ show, again. You know, the one that tells Boston where to go in a unifying chant. But even this purple and gold bleeder says, let the green have their day. There is something to be said for toxic fandom. I’m not smoking something. Nor am I a shade of grass with envy.

Respect where respect is due.

We’re not here. They are. And all tied-up at 17 chips each, it all comes down to this. Boston could edge ahead as the Lord of the Rings again, like they had been for decades. Not two years after the Lake Show bubbled in Florida.

Welcome to the only time you’ll see green and gold and purple go in to the Finals…together. Side-by-side. Strapping on a Bean Bryant 24 band with Mamba Mentality.

Tatum even sent a text to Kobe’s phone following the Game 7 win. “I got you today”, he wrote. Sitting in the champagne soaked dressing room, head down, with shades of Bryant in the 2001 Finals of his hometown Philly. Pensive and contemplative.

Jayson Tatum has bested Kevin Durant, Giannis Antetokounmpo and the fly in every analyst’s best in the league debate ointment, Jimmy ‘Buckets’ Butler.

Oh…and Klay Thompson. Draymond Green and so on. Not forgetting Jordan Poole and the rest of the young splash family that no longer reside in the shallow end of the pool with their championship pup pedigree next to the veteran legends.

But if anyone can beat a Warrior and its band of brothers like this. A Golden State of basketball now dynasty re-certified on their way to being storied like that other California team. It’s the most historical team in association history.

And their next legend ready for the rafters with the next banner after the likes of Bill, Larry, Paul and so many more.

Oh, and Jaylen Brown too. A superstar in his own right who may just be at the top of the list of the best Scottie Pippen of today. A discussion no one is having, but everyone should. Every Batman needs his Robin. Or man on the wing each night.

Let’s not forget Defensive Player of the Year Marcus Smart and his basketball IQ. Or veteran of legendary longevity, Al Horford. Hero Grant Williams. Or big Robert Williams III in the post too. Add the future of points like Derrick White and Payton Pritchard and the blue collars of these Celtics green with pride are putting it in.

Just like Ime Udoka. Making the Finals his in the first year as a head coach.

Doing work, it’s Tatum who has been delivering the knockout punch, though. So much, so he’s even having awards made for him. The Larry Bird MVP trophy may be smaller than the person “who’s coming in second’s” chance of beating number 33 in a three-point contest, but this zero hero is putting up the big numbers.

Downtown Miami felt like Beantown following the C’s 100-96 road clincher against the Heat. As their talents took the Eastern Conference trophy from South Beach in what looked to be a Heat homecoming back to the Finals following their Florida fling.

Tatum’s team-high 26 points and 10 rebounds was the double, double that doubled Butler (35 points) and company over. Not to mention Brown and Smart both having 24 next to the man that wore that digit on his arm. Big Bam Adebayo on the other side had a massive 25 points and 11 rebounds, before ripping off his jersey like the Incredible Hulk.

It all went green.

Now Boston believes it can thunderclap one more time against a new/old Warriors dubbed dominance. This is the first time the Celtics have been in the Finals since Kobe Bryant broke the Hall of Fame hearts of Kevin Garnett, Paul Pierce and Ray Allen in 2010.

The last and only previous time the Celtics met the Warriors in the NBA Finals was 1964 as two of the biggest post players in history, Bill Russell and Wilt Chamberlain, faced off for the first time.

Back then, Golden State were called the San Francisco Warriors. A place they now reside once again.

Coming across the Golden Gate Bridge on the road, the Boston Celtics don’t care about any of that. They’ve barely changed since more than a half-century ago. Whether it’s down to the threads of their classic Celtics jerseys or the veins of their championship mentality.

The Warriors may be the favourite. But you know how strong Boston is.