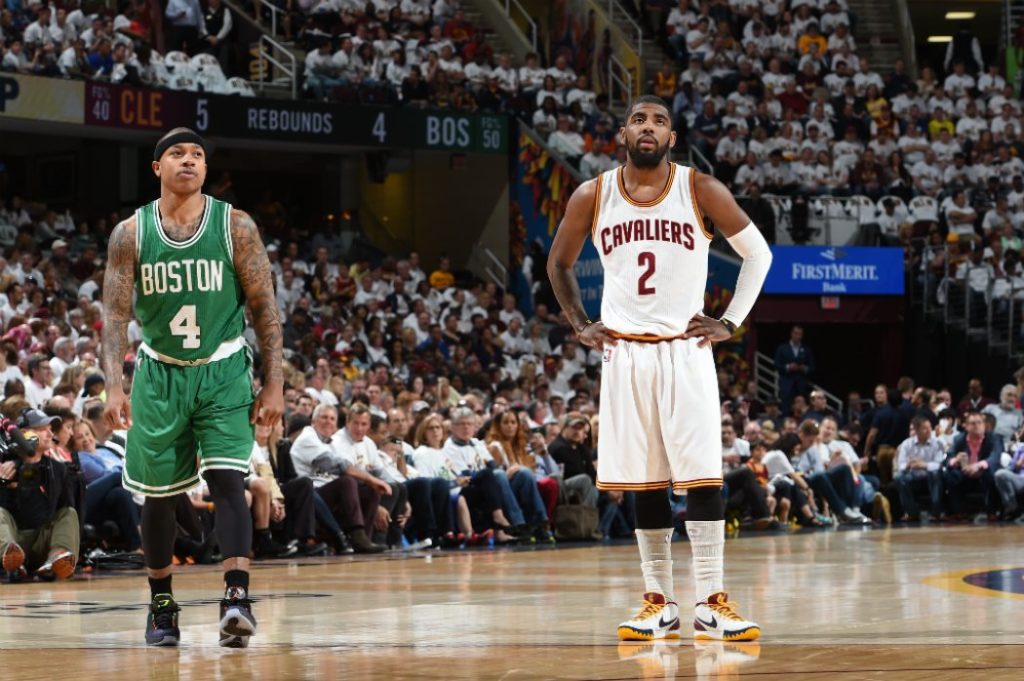 And this one is a real changing of the guard, as the NBA has just completed a blockbuster package deal that has the makings of a perfect Christmas Day game present to open up if only this December 25th.

The Cleveland Cavaliers have traded Kyrie Irving to the Boston Celtics for Isaiah Thomas.

Get your memes and gifs ready. I bet you didn’t think you’d wake up to this did you?! A month of speculation after Irving came out of nowhere this Summer and demanded a trade from his former champion Cavaliers has come down to this. Kyrie was linked to just four teams over the last four weeks (the New York Knicks, the Minnesota Timberwolves, the Miami Heat and the Phoenix Suns), but ended up being swapped for former Suns son Isaiah Thomas who now has become somewhat of a superstar journeyman.

Many thought I.T.-4 who shares his name with an 80’s era legend would finally finish his career as the next Celtic great in a legacy making long lineage of legends in the NBA’s most storied franchises history. From Bill to Bird to The Truth. But now Aussie ruler Irving gets that honour for the old Irish. Kyrie finally showing the King and all the NBA’s men…not to mention the world what he’s made of as a young prince all on his own. Leading a contending team of big-man Al Horford, superstar sophomore Jaylen Brown and fellow new summer stars rookie Jayson Tatum and free agent All Star Gordon Hayward.

As for the once champion and King James. LeBron loses an ally from his land but best believe he gains one just as good with his new mini-me, King of the 4th, Isaiah Thomas (who he needs to let reign like Kyrie Game 7, final period 2016). Switching a number 1 pick for a former number 60 doesn’t seem like for like. But when it’s the next gen new Isaiah Thomas then it’s a different story all together. Remember this is the guy that ruled the East, putting all on Beantown on his burdened back until the King made him look like a concrete book with his Statue of Liberty dunk. Now together the Cavs are all in getting talented youngster Jae Crowder, Ante Zizic, the Brooklyn Nets 2018 draft pick and arguably the better end of this deal.

Must Read:
Dame Time Forever. What Are Those New Adidas 'Black Panther's'?

And lets not forget Love. The born again Big-Three lives.

And it really all is Kevin’s last name as Cavs fans looking to burn Kyrie’s jersey like LeBron’s old wine and gold on decision day actually ended up dropping thank you notes on it. As by royal Twitter decree the King retorted a co-sign stating, “That’s the only way to be to the kid! Special talent/guy! Nothing but respect and what a ride it was our 3 years together Young Gode”. The Boston C’s legendary owner Danny Ainge in addition adding that Thomas was and always will be an “embroided part” of Boston basketball history.

But we all won’t know how it will really play out until the new most eagerly anticipated match-up of the year, in the new scale shift balance of power in the beast East best coast.

Bring on the Eastern Conference Finals…it’s on!