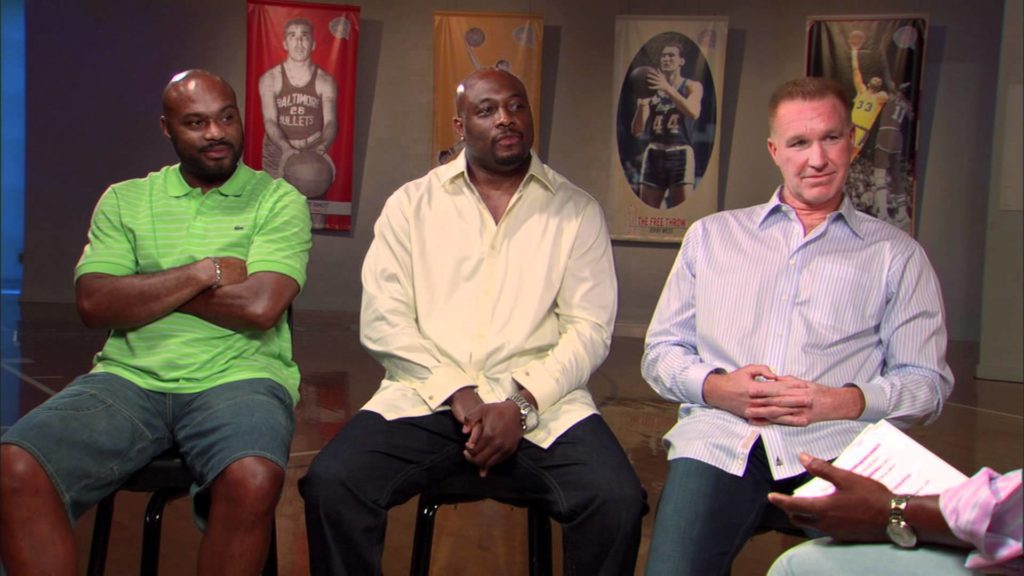 Warriors ‘Crossover’ To Run With TMC

And with that the greatest NBA nickname for one of the best big-three’s in basketball history was born.

But if you want to talk about a real, original throwback, hardwood classic big-three than you have to take it back to the golden era of the 90’s when NBA family, Warriors legend Rick Barry became a grandfather for more than his under arm free throw technique.

The time the Bay Area almost made it to the big-time before this new Dub plate and we’re not talking about the time B-Diddy, Baron Davis dunked on Dirk and the rest of Dallas. We’re talking about the original Nellie ball when Don Nelson let the small ball revolution of Tim Hardaway, Mitch Richmond and Chris Mullin’s big three run in the big-man association of the Ewing and Olaujawon 90’s.

They called them Run-TMC. Not ‘Three Men And A Basketball’. Or even the classic close to the hip-hop coast but no Biggie cigar, ‘3 Live Crew’. These Kings of The Hardwood named after legendary hip-hop group Run-TMC were tougher than basketball leather and raised hell in the NBA like Julius Erving hitting a touchdown…we’re sorry we mean dunk. Forget a splash brother. These original new generation Warriors rocked the Pacific and featured some real Hall of Famers.

Timmy Hardaway who practically invented the killer crossover, before Allen Iverson made it his own. Mitch Richmond, an Oakley and Mourning 90’s tough, take no prisoners big player, locked down in a guards body, who could really score…and you thought Steph changed the game and guard position. And then there was Chris. From Curry to Larry how can you talk about the greatest shooters of all-time from three without talking about former ’92 Olympic Dream Team member Mullin?

This G.S.W. was one of the 90’s biggest hits. Even if everything and everyone from John Starks to those mid-nineties Rockets teams where overshadowed by some Nike Air silhouette. These hardwood kings could have seen the throne if their Rock, Mitch Richmond wasn’t traded to Sacramento. But their legendary legacy will always live in Basketball lore. All you have to do is Youtube NBATV’s ‘The Power Of Three’ or look at all those t-shirts in the Bay that are no printing error like that Far East “Nirvana” t-shirt with Hanson on that has now become a cult favourite.

Now on Any Given Sunday this season Kevin Durant’s new Golden State Warriors will rock some updated jerseys throwing it back to the TMC times of the 90’s. Steph Curry, Klay Thompson and Draymond Green will run in these simple white and blues, different to their modern, iconic, carriage classics. These vintage ‘Crossover’ uniforms will truly honour Timmy and Co and also be the perfect retro fit to school the bandwagon fans on some old history.

Because the Golden State Warriors have been relevant for longer than just Chef Curry’s three-ball.

Time to cook up some knowledge.

Suit up. Smart up.