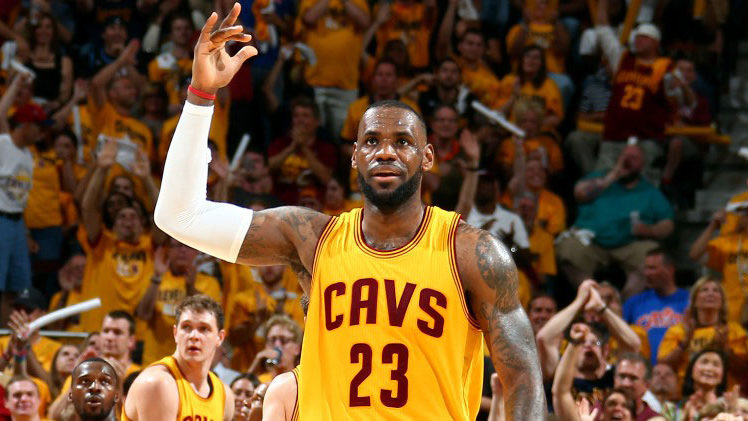 Cropped Will The King Lebron James Take His Throne Once Again.jpg

Miss? Nah the King doesn’t even have that on his crown when he comes at you!

After kneeling to the basketball Gods after game three and thanking them for everything he had and gave, LeBron James became one last night. As sire James went all in for his city as his Cleveland Cavaliers swept away the former East best Atlanta Hawks with a 118-88 blowout and 4-0 series sweep.

Now heading to the final four game countdown will this throne be fit for the King?

This could be the makings of history as LeBron moves ever so closer to the legendary likes of Kobe and Jordan, along with Oscar-worthy Magic for his realm. Not to mention the fact that James is the first player since Celtic legend Bill Russell to reach five straight finals.

Like last night the King had a jersey number in points to go along with 9 rebounds and 7 assists for another almost triple-double, its time to give him his crown back. As he’s going for his throne once again by royal decree.

After putting a dunk exclamation on the game with his trademark tomahawk in his signature Statue Of Liberty throwdown pose that really stood for something, the ball was on fire like he is on a 30.1 point playoff average. The book under his arm may as well have been the NBA playbook.

The world is now King James’, as he orbits rings and hoops around the opposition. Wrapped around like the headband that used to circle his dome. Now critics are receding like what they used to say about ‘Brons hairline.

Come at him now!

I bet you don’t hit!

Sure the big three of Al Horford, Paul Millsap and Jeff Teague league-leading Hawks were missing another one in Kyle Korver, but the Cavs have been without Kyrie Irving for most of this series and their other big three member Kevin Love for the rest of the playoffs…so hate them now. Like the Knicks do Smith and the rest of the league do when it comes to J.R.’s big shots.

Now after this clean sweep and the wine and golds champagne on cooler ice, Ohio’s finest will probably play Oakland’s in an epic finale with MVP, hot shooting Stephen Curry and his Golden State Warriors, who once again are just one game away. Unless Big James Harden and his Houston Rockets have something upsetting to say about that.

Still, we all know where the real King James resides back home.

Now in this game, let’s all watch the throne triumphant.