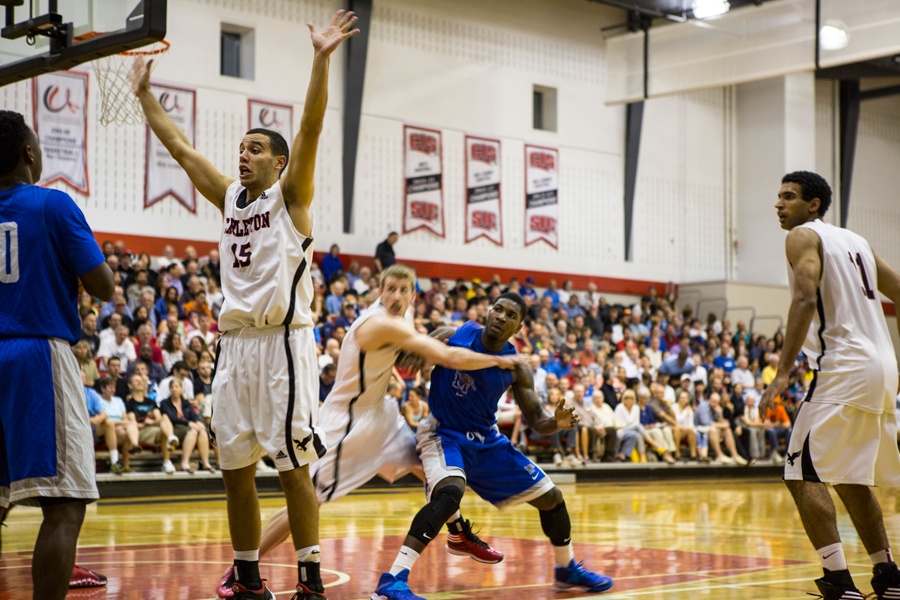 Carleton Ravens defensive pressure too much for Memphis Tigers

Ottawa, Ont. – The Carleton Ravens behind a stellar-defensive game-plan and scorching second-half routed the Memphis Tigers 92-60 to wrap-up the NCAA/CIS preseason schedule with a 4-1 record over NCAA teams and earn a 2-0 sweep of the visiting Tigers at the Ravens Nest in Ottawa.

The Ravens jumped ahead 20-11 in the first-quarter on the strength of their suffocating team-defense  forcing Memphis into to nine points off of eight turnovers in the first ten minutes of the game and never looking on their way to their largest margin (32 points) of victory over a NCAA division one team.

Three-time CIS MVP and four-time champion Philip Scrubb (Richmond, BC) continued his hot start to his fifth and final year in Ravens uniform with another 30-point performance on a sizzling 9-of-15 shooting from the floor, 5-of-9 from 3-pointers and a perfect 7-of-7 from the foul-line. Connor Wood (Guelph, Ont) was also on fire with 21-points on 5-of-7 triples. Thomas Scrubb added 13 points plus seven rebounds and sophomore J.E Pierre-Charles rounded out the scoring with efficient 8 points and seven rebounds for the Ravens.

The Ravens defense picked up multiple charge calls and limited Memphis to 20-of-40 shooting (40%) in the game. The Tigers once again struggled to connect from the outside going 1-of-12 (8.3%) and just 19-of-33 from free-throws.

“I don’t think we did a great job rebounding, but I thought we did a great job defensively, we were willing to take hits, willing to stand and take some charges. We kinda of played little pretty boy basketball the first four-games and got by on talent and making some plays defensively without actually being tough about it. I think today we took some hits from some pretty big athletic guys and took their aggressiveness away by taking some charges.” discussed Ravens head coach Dave Smart after the win.

Smart was able to rest his starters shutting the Scrubb brothers with over five-minutes in the game giving the Ravens bench a valuable experience against a top caliber NCAA team. “I think it’s good, I think Mitch Jackson has a chance to be special, I really do, he’s a 17-year kid coming from Regina as true great grade-twelve. He played in Regina and there is not the same competition and he is doing a great job in our practices, I think he did a good job when he was out there.” further described Smart when asked if he was pleased with his bench play.

Carleton bench combined for 18 points in the contest with all but one player hitting the score-sheet.

Memphis playing in their fourth-game in four nights was led by point-guard Pookie Powell’s 13 points, Chris Hawkins also reached double-figures with 10 points, five rebounds including an emphatic put-back dunk in the second-quarter.  Shaq Goodwin added 9 points and five rebounds for the Tigers.

“Well, we are not going to use the excuse on fatigue, I mean it is four-games in four days is hard, especially with only eight guys, we were a little exhausted but Carleton deserves the credit they just shot the daylights out of it again in the second-half. First-half we held them for 2-of-12 from three and then in the second-half they were 9-of-11 and that just opened the game, we were 1-of-12, with 21 turnovers isn’t going to do, 19-33 from the free-throw line and you are going to lose the game by a lot against a really well coached team with good players.” Tigers head coach Joshua Pastner told BasketballBuzz briefly outside the lock-room.

Memphis finished it’s 2014 Canadian tour with a record of 2-2, picking wins over the Ottawa Gee-Gees and the McGill Redmen in Montreal.

“It was great for us, we needed to get exposed on some things and that’s why I wanted to come over here because I knew the competition was good, we needed good competition specially with us being so young in the back-court, very inexperienced, the only guy that has played meaningful minutes that was with us was Shaq Goodwin from last year, Nick King played in the second-half of the season was in rotation, everybody barely played minutes so this was an opportunity to really give guys playing time to see who can do what and who cannot do what and have a good evaluation.”

“Canada was great the hospitality was great, you know the people are great, very good basketball here, great shooters. Pastner added about his experience on Canadian soil.

Carleton wrapped-up another successful NCAA series with a 4-1 record and will have the opportunity to add to it’s recent success against top calibre NCAA teams when it visits the Carrier Dome on Nov. 2nd for a date against the Syracuse Orange.

For Smart and his Ravens the sights are now set and focused on adding to the silverware and defending the CIS Men’s National championship. When asked how his team will stay focused, knowing they just blew-out a Memphis team that many of his own players will be bracket-picking come March Madness, while also knowing they will not play another CIS team with as much speed and athleticism during their upcoming season.

“Well it’s easy when the number one team in the country is five minutes away. I think across the board everybody in our country, like coaches, players think Ottawa U is the number one team in the country, and you know what, don’t disagree with that. If our guys can’t stay focus with the fact that they are five minutes down the road, and it kept them focused so it should keep us focused. They got a pretty scary basketball and they are only five minutes away.”

The Ravens and the Gee-Gees will get acclaimed to one another on Saturday January 10, 2015 and once again on Friday February 6th on the big stage at the Canadian Tire Centre.