St. FX transfer, Bol Kong exploded for 20 first-half points and finished with a career-high 32 as the ST. FX X-men silenced the red hot Cape Breton Capers 87-69, in a highly anticipated AUS match-up that failed to live-up to its expectations at Sullivan Fieldhouse in Sydney.

The X-men held the Capers scoreless for the last five minutes of the opening quarter while manufacturing a game changing 17-0 run and a 28-11 lead on the strength of swarming defense and extremely hot shooting.

X’s All-Canadian Sophomore Terry Thomas got the crowd jumping with two thunderous dunks, a hard one-hand crammer on the fast-break and Lobcity like alley-oop courtesy of Tyrell Vernon.

The combination of Kong, Thomas, Jeremy Dunn and newly inserted into the starting line-up, Jordan Clarke scored all of St. FX’s second quarter points and put the game out reach with a 55-28 lead at the break.

The lead reached a game-high 33-points midway through the third-quarter as the X-Men claimed first place in the AUS standings and improved their record to 13-4.

In only his third start of the season Kong went 11-of-18 from the floor, 2-of-3 from downtown and 8-for-9 from the free-throw line, while adding a game-high eight rebounds.

The X-Men defense held the Capers All-Canadian Guard Jimmy Dorsey to only 12 points on 3-of-13 shooting while forcing 21 capers turnovers.

Steve Konchalski and his troops have fired off four straight victories after struggling out the gates at the start of 2012, and barring any major upsets, X is amongst the two favorite teams to represent the AUS at the 2012 CIS Men’s Basketball Final 8.

For Kong, it was only a matter of time before had a breakout game, the former Gonzaga Bulldog has been used sparingly as Coach K slowly integrates his prized recruit into his system after missing much of the first-half.

He’s averaged 16 points and 7 rebounds over his last four games and should continue to see a bigger role in as the X-Men make their drive for a National championship.

Ottawa, On – (BasketballBuzz) – The No. 1 Ottawa Gee-Gees made sure they held-up their end of the bargain by knocking off the No.... 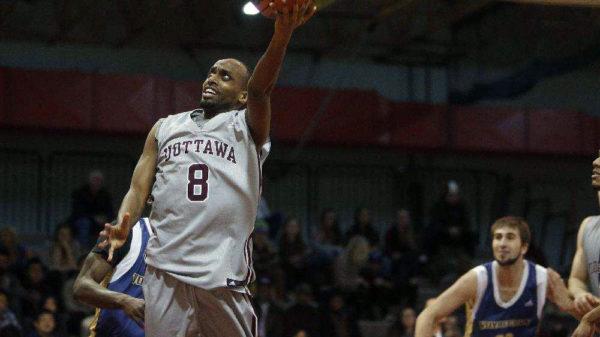 Toronto, Ont. – (BasketballBuzz) – Junior guard Johnny Berhanemeskel drilled a mid-range jumper with .7 seconds left on the clock to give the No....

Ottawa, Ont. – (BasketballBuzz) – In a match-up that has the whole country buzzing, it’s #1 vs. #2 as the Carleton University Ravens host...