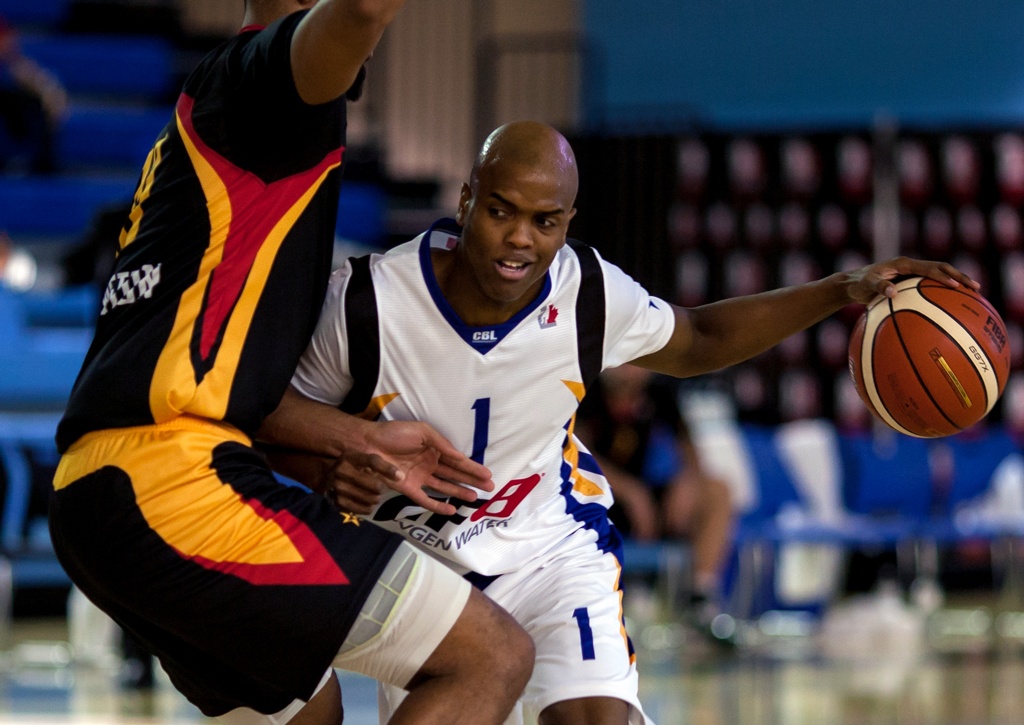 HAMILTON, ON: It’s over sixty minutes before the Canadian Basketball League’s inaugural tip and Butch Carter was pacing the sideline like an expectant father. He was overseeing his small army of staffers as they retrofit a modest gym on the grounds of Mohawk College into a facility suitable for professional basketball. At times he breaks from his routine on the sideline to pull a player aside to give some technical advice. It is in Carter’s DNA to coach young athletes.

From his time of coaching Ohio powerhouse Middleton High School in the Eighties to his tenure of coaching the Toronto Raptors with young superstars Vince Carter and Tracy McGrady on the roster, Coach Carter has made it his priority to develop young basketball players. After his tenure as Toronto Raptors’ Head Coach came to a conclusion in 2000, a controversial decision that irked many of the Raptors’ faithful, he remained closely tied to Southern Ontario and very interested in the pulse of basketball north of the 49th. Over the past two years the Springfield, Ohio native has focused all of his attention towards the creation of the Canadian Basketball League.

The naysayers have barked that Carter is crazy to back such a venture. Not only is he operating in an NBA market, that includes a D-League affiliate, but he is going head to head against the National Basketball League of Canada – a modest league that has plugged away in the Maritimes and Ontario since 2011.

Carter has never backed away from the challenge believing that his business model of single entity ownership ,manageable basketball friendly venues , a league adopting FIBA rules and enlisting young players are the key ingredients for its longevity. When he discusses his business plan he references the single entity structure that exists in Major League Soccer as it has grown into a serious player within North America’s crowded sporting landscape. In a single entity ownership structure the league owns and controls all member clubs. Investors then purchase shares in the league overall.

Despite some setbacks over the past two years, that included pulling a franchise from the Kitchener Waterloo region, Carter has unveiled a four team league that will play a 52 game schedule in Oshawa, Guelph, Hamilton and Scarborough, that will conclude on April 1. Teams will play in modest gyms with seating capacities ranging from 800 – 2400, situated in two community colleges, one university and the Pan Am Centre in Scarborough. There are also two neutral site games scheduled at Queen’s University in Kingston.
​
But it is the Canadian Basketball League’s collection of coaches that appears to mimic Carter’s life- long commitment to player development. His four coaches, who represent the face of the league, have varied coaching CVs but one thing remains constant – their ability to teach young players.

Garrett Kelly was introduced to Carter through a mutual friend from TSN in Montreal and eventually landed an interview. “I came up to Toronto in May 2015 for a one day interview and stayed for 13 days with Butch working on the league”, explained Kelly who calls Asheville, North Carolina home. “We’ve been together pretty much every day since, building the league,” he added. Not only is Kelly overseeing league operations he will also be coaching the Scarborough franchise – his first head coaching assignment. Just shy of 30 years old Kelly has established a rather impressive resume after completing his collegiate playing days with Loyola Maryland. One season as an Assistant Coach at the Catholic University of America in Washington led to a position as Video Coordinator at Radford University – a D1 school in Virginia. He was later promoted to Director of Basketball Operations at Radford where Coach Mike Jones saw the team eventually win a school record of 22 wins while sending four players overseas to play professionally. Kelly later reacquainted himself as an assistant under his old college coach Jimmy Patsos, who is now at Siena College.

To compliment Garrett Kelly’s youthful energy the CBL brought in seasoned veteran coaches Mark Anderson and George Jackson. Anderson, who is guiding the Hamilton franchise, grew up in Indiana where he started his coaching career as a 7th grade coach and made his way up to Varsity Head coach in the basketball hotbed State. “we had 18 baskets and three full courts in a gym with approximately 3200 seats for a high school with 350 students. Anderson moved to the college ranks where he rebuilt two college programs culminating with a national college championship in 2004 with Cuyahoga Community College in Cleveland. Anderson has seen 13 of his players move to international basketball over the past three years. Since 1983 he has also been a camp instructor with the highly acclaimed McCraken Basketball camps of Indiana – a camp founded by the legendary Indiana Coach David McCraken. But Anderson proudly announced that: “ Ican see things about a player in a three man weave or what needs to be fine-tuned in a jump shot.” He cautioned, however, that the biggest thing in a player’s development is that; “ the player MUST want to be coached.”

To compliment Anderson’s experience Butch Carter convinced Cincinnati high school coaching legend George Jackson to take over the CBL franchise in Wellington. After spending 22 years at Withrow High School ,where he posted a 311-146 record as a head coach, Jackson turned his attention to the college ranks joining the coaching staffs at Seton hall, Bowling Green and Xavier University in his hometown of Cincinatti where he joined respected head coach Mick Cronin.

Rounding out the CBL coaching staff is former Toronto Raptor Point Guard Milt Palacio who enjoyed a seven year NBA career before he took his talents to Europe. The CBL will be Palacio’s first head coaching job and he will be leading Durham United this season.​

There is no shortage of American basketball players to stock any professional league. With 347 American schools hosting Division 1 basketball programs, not to mention an infinite number of Division 2, Division 3 and NAIA leagues, there is a gluten of talented American players looking to extend their basketball careers beyond college. Although it is estimated that 250 Canadian players are playing professional basketball outside of Canada very few have yet to make it onto CBL rosters. To review and excavate the endless stock of talented American players the CBL think tank turned to McNeil Sports Group and their popular exposure camps across the States. CBL officials attended camps in Dallas and New York City where they eventually signed eleven players – almost a third of the entire league’s roster.

“We are excited about the league (CBL) and think it is going to be a great league developing players and getting them to the highest level possible for each guy,” explained Brian Luby, McNeil’s Director of International Basketball Operations. “That is what we strive for with players who attend our events and who we represent so it is a natural connection ,” he added.

For Durham United teammates David Tucker and Manny Thomas, fresh off their college careers, the exposure camps led to their marriage with the CBL. After a decorated high school career Dallas native David Tucker took his basketball skills to NAIA powerhouse University of Science and Arts of Oklahoma where he finished as the school’s ninth all-time scorer with 1,035 points and he was selected to the third team, Sooner Athletic Conference all-conference team as a senior.

Tucker found the journey to the CBL to be very challenging and the financial investment to showcase his talent to be quite substantial but he is determined that to pursue a professional basketball career. After attending the first exposure camp in Houston he had resigned himself to the fact that he was heading back to school to complete his Degree as a career in professional basketball was not in the offering. But he was convinced to showcase his talents in a second camp in his hometown of Dallas and his skill-set caught the eye of Garrett Kelly who was scouting the camp. Tucker was subsequently invited to the CBL combine in Cincinnati and signed to a CBL contract shortly after.

For Manny Thomas his journey from his home town of Brooklyn to Durham was less complicated. Thomas, who recently completed his NCAA D1 basketball career with Marist College in the shadows of New York City, had a break out exposure camp in New York City showcasing his high motor and ability to get after it. Similar to his time at Marist when he was coached by the likes of Chuck Martin (now an Assistant at Indiana) and Mike Maker the 6’4” swingman relishes the opportunity to be mentored by Durham United Head Coach Milt Palacio. “ I am blessed to be coached by Milt Palacio who is an NBA veteran who really knows the game,” announced Thomas who is also three courses shy of completing his Master’s Degree in Securities Management. “My goal is to win a championship and hopefully get an opportunity to play in Europe before my career is over.”

Butch Carter has never minced words about the type of player he wants to represent the CBL. “We are going to sign high school players,” is his bold proclamation. One such player who has migrated to the CBL is 19 year-old Jatrious ‘JJ’ Smith – a 6’ 4” guard who was once rated by ESPN in 2015 to be a top 20 prospect for the class of 2017. Smith, a Fayetteville, North Carolina native, who last played for a prep school in Georgia, was on the radar of several Division 1 programs before he decided to export his talents north of the border. He will be under the watchful eye of Coach George Jackson in Guelph who knows a thing or two about mentoring young players.

League officials did not disclose the salary structure of the league nor how much the four coaches are making but not unlike other professional basketball leagues abroad the CBL is offering many players an opportunity to live abroad while showcasing their talents for the next step in their basketball careers.

While Butch Carter and his inner circle plods along during the Canadian Basketball League’s inaugural season, not deviating from the original blueprint, the mission statement remains simple – “If you build it they will come.” But Carter cautions those offering him advice on how to build the league that the task at hand isn’t that simple.