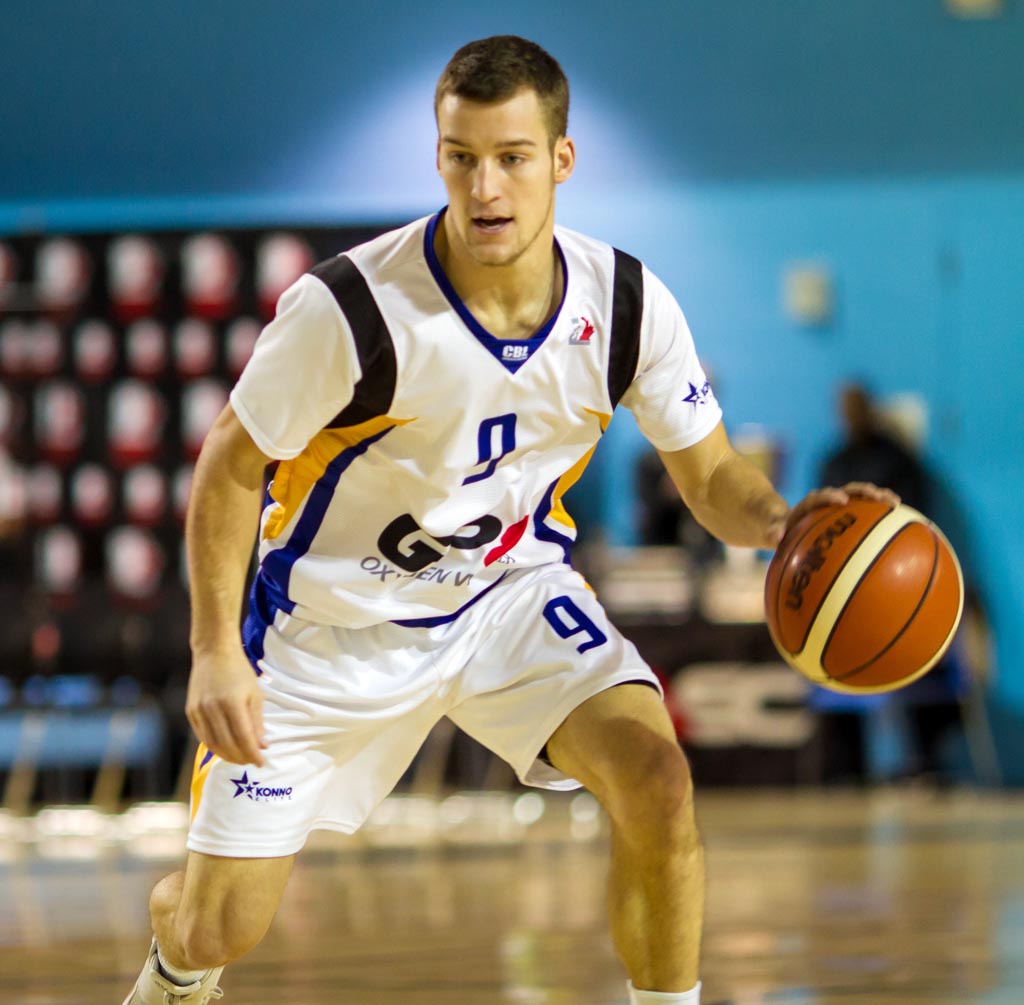 My road to the Professional Basketball and the CBL has been all about work.  I’m from a small city called North Bay in Northern Ontario.  It’s my home and I love that place but that being said there hasn’t been a whole lot of 6 foot white guys from North Bay who play pro basketball.  In fact I think I’m the only player from North Bay to ever play pro ball.  I have never been crazy talented or super athletic like most of my teammates are here in this league.   I just got here from working hard.

My yellow hard hat (pictured) has been in my room since I was about 15. At first it was there because I needed to wear it to my bricklaying job with my uncle every day. But over time it became a symbol for me. It represents all the people in my life that taught me what it means to work. I’m very lucky to have been surrounded by these people.

My mom was is one of the toughest and hardest working people I’ve ever met, being a single mom raising three kids and working to support us could not have been easy.  She is one tough lady and that hard hat represents her.

My uncles are all extremely hard working people that I learned a lot from. I worked for my uncle Dave for 6 or 7 summers doing construction and landscaping. From roofing to bricklaying to shoveling gravel.  As hard as it was that job is the best thing that ever happened to me. After spending sometimes 12-13 hours in a day laying bricks or shoveling, one more sprint, ten more reps or extra time in the weight room seems like nothing.  It taught me so much about what real work is. I have a tremendous amount of respect for him and his employees because they really know hard work. 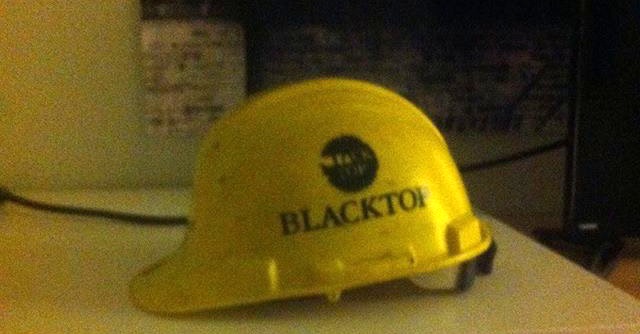 My college coach saw the hard hat one time and asked about it.  He liked the idea and actually brought a hard hat to practice where it became a tradition of everyone touching it before practice.  It was sort of our way of clocking into work.

I have had great coaches throughout my career. I played for my hometown university and was lucky to be coached by Chris Cheng, He was starting his first university coaching job and was determined to not be out worked by anyone. We first became close after my first bad practice at training camp. It was our 2nd practise of the day and it went from 6pm-8:30pm. I had a bad practice and I wanted to stay at the gym until I felt better about it. He stayed at the gym with me until midnight shooting and going through drills. After that we had an immediate respect for each other and our respective work ethic. I learned a lot from coach Cheng.

My first coach growing up was Mr. Tougas. He was an extremely dedicated and enthusiastic coach that hated losing. He brought together 8 guys at a really young age and stuck with us. We started playing OBA together in grade 7 and stayed together as a team with the same guys for 6 straight years until we all graduated high school. Today I consider these guys my brothers.  We spent so much time together growing up that it made us family. We were always on road trips for tournaments and when we went we lived at each other houses for years. That group of guys was and still is extremely humble and hard working. Every one of them went on to be successful in sports and in life in general. I think each of us feels satisfaction when a person within the group accomplishes something because we feel like we have all played a part in it. My hard hat is a reminder of these guys because i know they will never let me live it down if I don’t work as hard as i can at this opportunity. 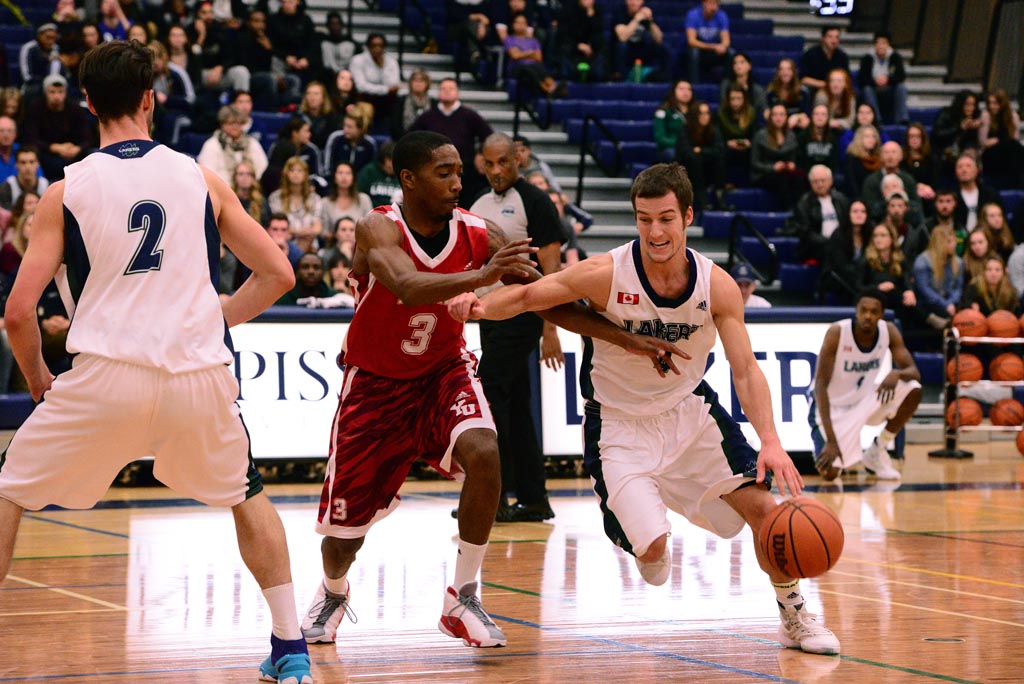 The last person the hard hat reminds me of is my old boss at this Chinese food restaurant I used to work at in North Bay. His name is Frankie, He owned the business and was the head cook. This man is a different kind of worker. A large part of his job is cooking and food prep for the next days. The restaurant is near my house and there is a window that looks right into the kitchen so when I drive by I could always see who is working. I would see him in there around noon every day. He would work from early afternoon until 2 or 3 in the morning, every day, 7 days a week for 20 something years. I have never heard of him complaining and I don’t even think he knows how. Whenever I would feel tired or worn out from school and basketball I think about Frankie and how it’s ridiculous for me to ever complain about being tired if he never does.

Must Read:
Canadian Basketball League (CBL): Build It And They Will Come

I brought my hard hat to my new place here in Toronto. It still sits on my desk as a reminder to make the most of this opportunity. My teammate Eric saw it and asked about it so I explained to him that I want to play basketball as long as possible so I don’t have to lay bricks when I go home to North Bay. Now before and during games he just looks at me and says “hard hat.” Basically saying go hard and shoot my shots reminding me about how hard i worked to get here and how much hard work it’s going to take to stay here.

Playing in the CBL is an incredible opportunity for me. I look around at the talent level of this league and it’s crazy. These guys are gifted, whether it be natural basketball ability or physically gifted with athleticism or both.  They are just flat out gifted. In my case I don’t have all the natural gifts and abilities that these guys have but I try to bridge the gap by getting in extra lifts and shots as often as possible. Trying to go to work every day with a blue collar mindset that I learned from my family in North Bay