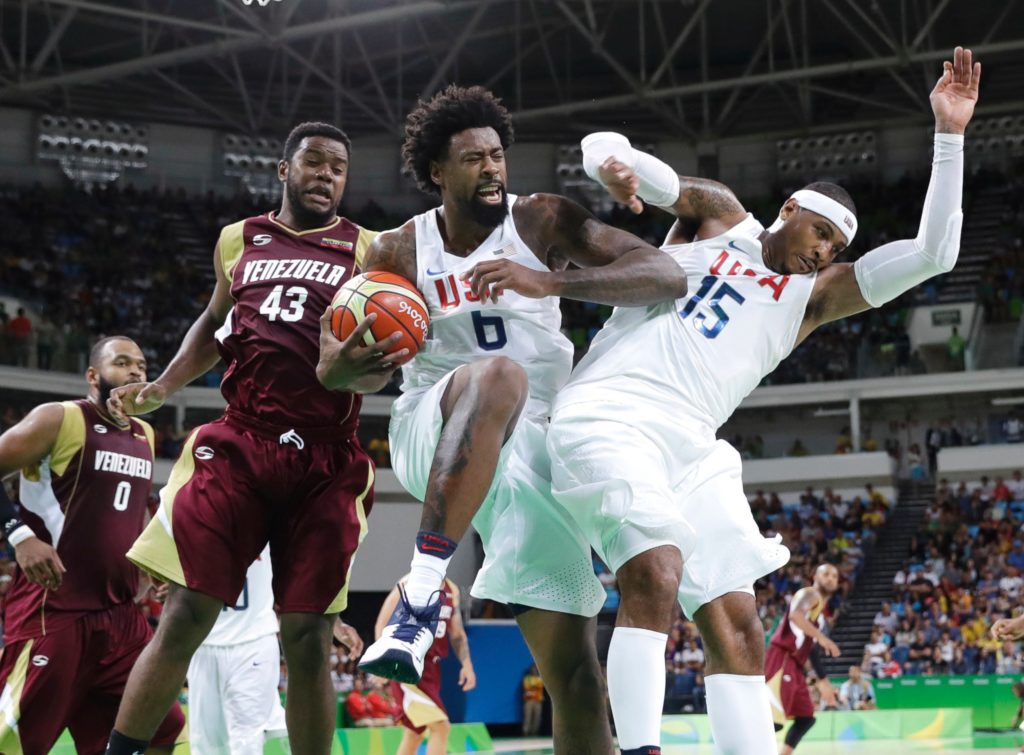 Jordan. The greatest name in NBA Basketball didn’t even win as many rings (6 to 11), as the greatest defender and Boston Celtic to ever take to the parquet, Bill Russell. Mike got an Olympic Gold though. As the undisputed leader of the 1992 Dream Team in Barcelona. So that balances the scales of hoop justice somewhat.

Now as the 2016 Rio Olympics Team USA look to take on Spain in Brazil tonight for the semi-finals of these games, another Jordan seems more keen to measure the weight of his court career in gold. Rather than engaging himself in talk about how many rings he will have on his fingers come the end.

Falling out of matrimony with Larry O’Brien. It now seems like DeAndre Jordan is more concerned about his place on the podium than the part of the NBA elite that winning a championship brings.

But then again he does play for the Los Angeles Clippers.

“I think they’re above NBA rings,” De told the ESPN press before man-handling Argentina in the quarter finals, hoping the rest of the United States will view medals in the same gold gleam. “I may get in trouble for saying that, but I believe that. I feel like this is more special. You’re not just playing teams in the U.S. You’re playing teams from all over the world. And this is even more special because there’s an NBA champion crowned every year, but this is every four years”.

No trouble from our end (and we’re Canadian), ‘Dre has a point. This is a global sport and these games are the great equalizer when it comes to that. And being crowned only once every four years is a special part of sports history and the legendary lore for your legacy. Just ask that guy that likes to jog, Usain Bolt. Or just look at how the NBA media turned it’s back on MVP Steph Curry and his reigning champion, 73 game, Jordan Bulls record beating Golden State Warriors in the NBA Finals when LeBron James and the Cavaliers reversed a never before beaten 3-1 deficit and brought a championship home to Cleveland…until the Dubs added Free Agent Kevin Durant formerly of the Oklahoma City Thunder this Summer offseason.

Must Read:
Hong Kong: Canadians Ballin’ in the City of Life

Fickle minds change quickly over the calendars, but what’s done over decades is set in stone.

“You’ve got to really think about that, man, because it’s extremely special,” added D.J.

This came not long after Team U.S.A.’s all-time leading scorer and leader of the last three Olympics-beginning in the bronze Olympic birthplace of Athens-Carmelo Anthony issued the same kind of statement. As arguably the greatest international basketball player the U.S.A. has seen in it’s history stated that he wouldn’t mind if he never put a ring on it as important to many men as wedding ones are to some of Beyonce’s women after all this gold he’s mined from Beijing to London.

But then again, he does play for the New York Knicks.

But Jordan is still young. He has plenty of time to fill the trophy cabinet. That’s why he stuck it out with the Clips and didn’t leave for the Dallas Mavericks last minute when he was a big Free Agent last year. And ‘Melo on the calm side of his career may be well into his thirties, but judging from right now he can still play. And judging from the Summer of Derrick Rose and Joakim Noah Chicago Bull signings joining top rookie, now sophomore star Kristaps Porzingis, these new New York Knicks no longer stink. The superteam may finally give the superstar a taste of the champagne he hasn’t sipped with the orange of N.Y. since his Syracuse days.

“Most athletes don’t have an opportunity to say that they won a gold medal, better yet three gold medals,” Anthony told press. “I can look back on it when my career is over — if I don’t have an NBA championship ring — and say I had a great career.”

The ringless couple and more Team USA members may be in no hurry to get a golden circle, but judging from the above picture their barging their way through this five for five as they jostle for a place on the podium.

Still, however when the Summer falls to a new NBA season their minds may change with the cooling weather.