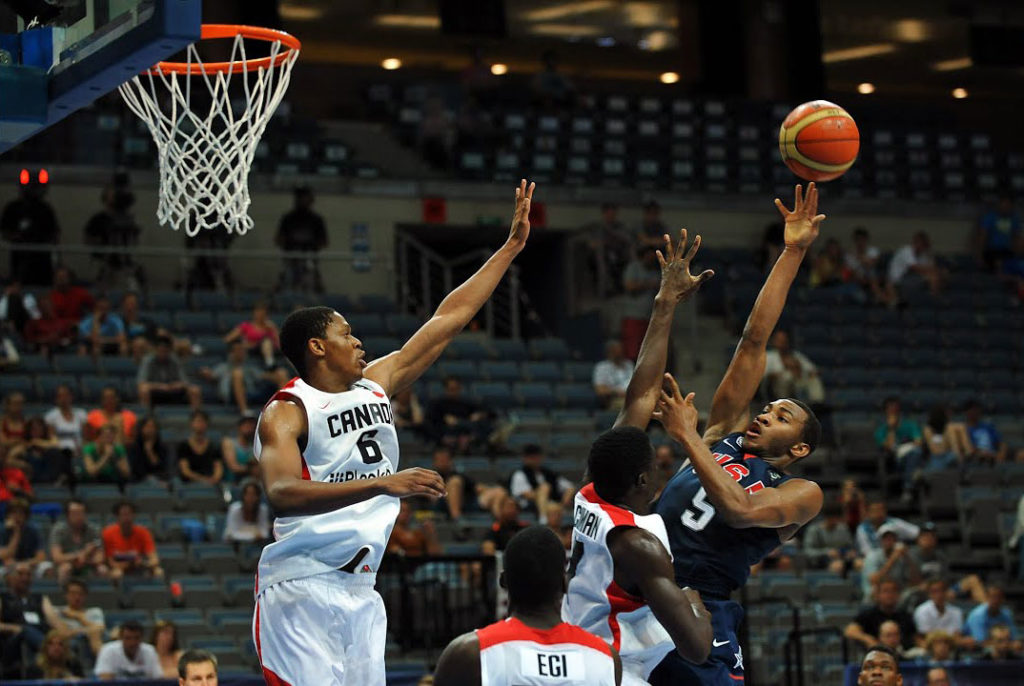 (BasketballBuzz) – Canada’s Junior Men’s National Team faced the difficult task of having to go through the number one ranked team in the World in the last Quarter-Final game of the 2013 FIBA World Championships, a hurdle that has proved difficult over the years, and tonight was no different.

The United States of America improved to 7-0 in Prague, Czech Republic with a comfortable 109-67 victory over their North American neighbors.

Canada opened up the game extremely confident after finding out that Trey Lyles (19 points, 8 rebounds) wasn’t going to play due to a sustained ankle injury that didn’t recover in time for the highly expected match-up.

Without Lyles in the line-up, Florida State commit Xavier Rathan-Mayes carried the scoring load for the Canadians with 14 first-half points to help keep Canada in the game despite shooting an unheard of 3-of-11 from the foul line. Canada trailed 30-22 after the first-quarter and was down by 15 points at 53-38 during the half-time break.

Canada went a dismal 8-for-20 from the free-throw line in the first-half and stuck around thanks to Head coach Roy Rana’s decision to switch to a 2-3 zone, limiting Team USA’s interior advantage. Outside of the terrible foul shooting and few late turnovers, Canada’s energy was positive.

Oklahoma State’s Marcus smarted wasted and the Americans wasted no time in the third quarter by outscoring Canada 31-12 while stretching the lead  84-50 after three-quarters.

Syracuse’s incoming freshmen Tyler Ennis never found his rhythm and finished with just 12 points on 4-of-12 shots. The tournament’s second leading scorer was forced to the bench in the opening quarter with two early fouls and never recovered. Other Canadians in double-figures included Agunwa Okolie with 13 points and six rebounds.

Team USA overpowered the Canadians inside with seven players in double-figures, Marcus Smart led the way with 14 points, while 6’10 center Jahlil Okafor did what he wanted inside and added 12 points and a game-high 8 rebounds. Arizona Wildcats Aaron Gordon came off the bench and was also productive with 12 points and five rebounds.

Must Read:
Canadians blow-out Senegal top Group A at 2021 FIBA U19 World Cup

Canada (3-4) still has opportunity to improve on their best ever finish (7th) at a FIBA U19 World Championship as they will now take on China (3-4) for the opportunity to claim a 5th-8th spot. The USA is one step closer to reaching the finals and will take on defending Champions Lithuania in the second semi-final. The other game will feature Australia against Serbia for a spot in the Finals.